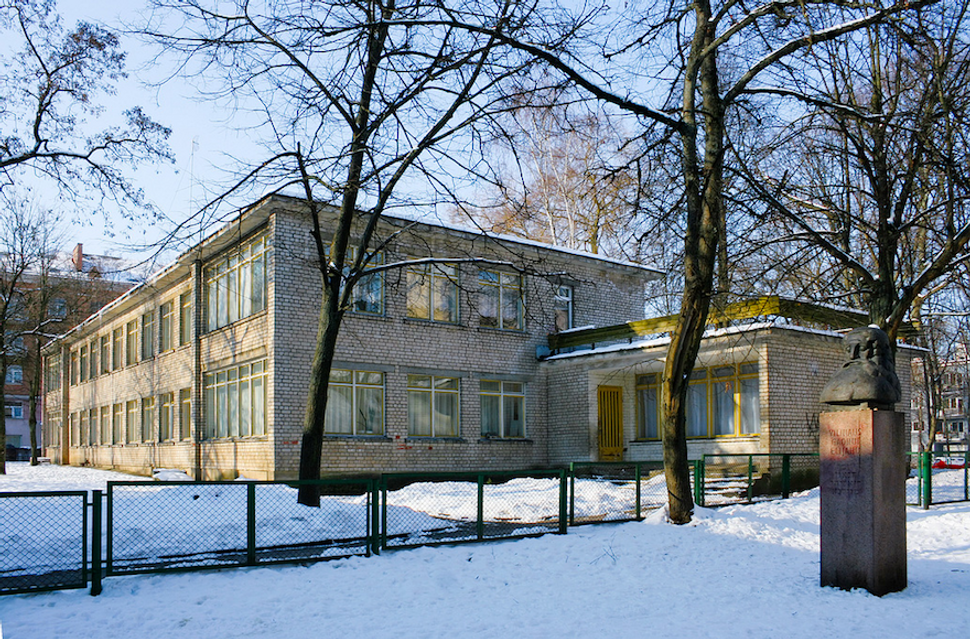 The former location of Great Synagogue in Vilnius is now a monument to the Vilna Gaon, an 18th-century rabbinical luminary. Image by Wikimedia Commons

(JTA) — Archaeologists have unearthed parts of the Great Synagogue of Vilnius, a 17th-century building, that were presumed to have been destroyed by the Nazis and Soviets.

One of the main findings from that section of the synagogue, whose ruins have been catalogued and mapped for several years in the current dig, are two mikvahs, or ritual baths, in its compound, the Israel Antiquities Authority said in a statement Thursday.

Additionally, the diggers have found a yad, a small metal object shaped like the palm of a hand with the index finger extended. The yad is moved along a Torah scroll to indicate which portion of the page is being read or sung.

The discovery this week follows the 2019 unearthing of the Tuscan baroque-style bimah, the synagogue’s central prayer platform, in the same dig by a team of international scholars headed by Jon Seligman, director of the antiquities authority’s Excavations, Surveys and Research Department.

While there is much documentation of the synagogue’s central parts, relatively little information is available on the so-called schulhof — the complex of facilities around the former synagogue that comprised the two mikvahs, Seligman told the Israel Hayom daily.

The city of Vilnius intends to build a memorial to the historic synagogue on the site that will display its artifacts in time for the 700th birthday of the Lithuanian capital in 2023.

In the 1950s, Soviet authorities built a school on the ruins in order to prevent the synagogue or another Jewish cultural center from being rebuilt.

The synagogue was built in 1630 on a site that had been used as a synagogue beginning in 1440.

Among the great sages who prayed there was the Vilna Gaon, the 18th-century rabbinical luminary Elijah ben Solomon Zalman, who lived and died in Vilnius.