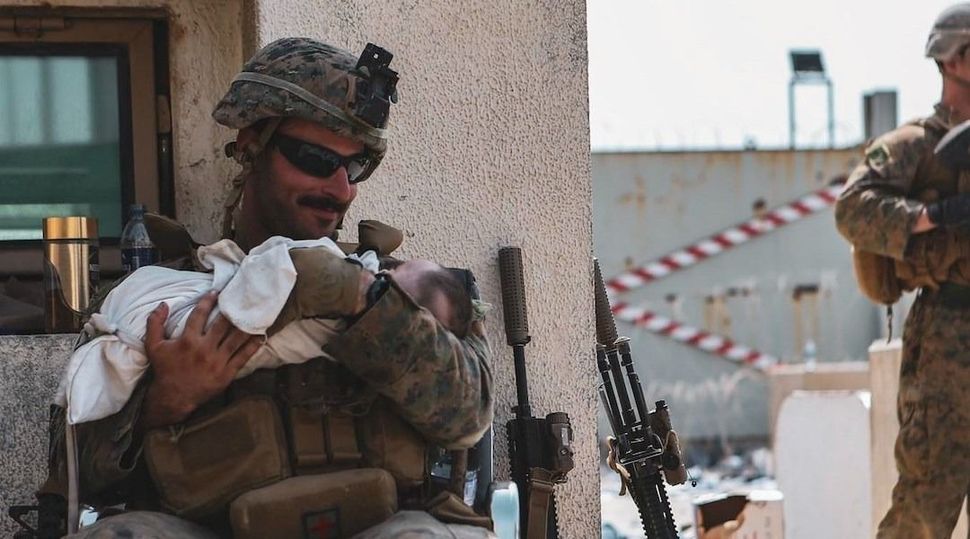 Matt Jaffe smiles at a baby at the Kabul airport in Afghanistan in a photo that went viral. (U.S. Central Command Sgt. Isaiah Campbell/U.S. Marine Corps)

(JTA) — Meryl Jaffe says she’s like any Jewish parent keeping track of her kids on social media, except it can be terrifying.

When she heard President Joe Biden deployed 3,000 Marines to Afghanistan, she had a gut feeling that her son Matt — she calls him Matthew — was among them. Her family was tracking the U.S. Marine Corps on social media to verify their suspicions.

“Matthew’s sister, Rebecca, saw it on one of the Marine websites that she follows on Instagram. And she said, ‘I think this is Matthew.’ We enlarged the picture,” Meryl Jaffe, a New York City resident, said in an interview. “And I’m like, ‘That’s him.’ So it was just the first time we had seen his face in days and days and days. So it was like a relief to see him.”

The photo was of Matt Jaffe, a 27-year-old sergeant, cradling a baby in Afghanistan on Aug. 20. The soldier’s smile, and the story behind the photo, helped make it go viral.

Matt Jaffe connected with the infant after another Marine handed the baby to him, according to news reports based on a Marines news release. (The infant’s sex was not identified.) The child was later reunited with its father.

“I’m just a Marine, same as the men and women I serve besides, doing a job to try and help people and protect people,” Matt Jaffe, who is based at Camp Lejeune in North Carolina, said in a statement attributed in the media to the Marines. “It’s pretty grim out here and sad. I had an opportunity to show some humility and do something that was good for the soul.”

Meryl Jaffe said Friday in an interview that the smile was her son through and through.

“Matthew has a great smile,” she said. “He has a really good heart. He’s a good soul.”

She was not surprised to see him bond with a child: Matt Jaffe had spent five years coaching kids at the Manhattan Jewish Community Center. There was one family whose boys especially adored him.

“He was their go-to babysitter,” mom recalled, saying both parents were professionals with unpredictable work schedules. Matt Jaffe would agree to babysit at a moment’s notice. “The boys loved him because he was fun to play with.”

Meryl Jaffe, the stage manager at WABC, the New York ABC affiliate, said she and her husband did not anticipate a military career for their son.

“Matthew was a kid that the only weapon he had was a very small water pistol in the playground, he was not allowed to have a Super Soaker,” she said. “We would not buy a Super Soaker for him.”

Matt Jaffe got work as a bouncer when he was studying criminology at the University of Maryland. He had made friends with other bouncers, some of whom were former Marines. He enlisted his senior year and was off to boot camp within days of obtaining his degree. He signed on for six years and is due for discharge in May, when he plans to pursue graduate studies.

“We were very, very, very concerned,” Meryl Jaffe said. “I mean, it’s not what we had expected. But we knew we needed to support him and get behind him. And that’s what we’ve done. We had to — we’re his parents, we love him.”

Still, it’s not an easy ride. Meryl Jaffe knew her son was in Kuwait when Biden deployed Marines to Afghanistan to help wind down operations.

“It’s almost like summer camp, where you’re trying to find your kid,” she said.

When Biden warned just before the last troops left Afghanistan that a second deadly attack could be imminent, she was beside herself, saying it was “very frightening.”

Meryl Jaffe had spoken to the media about her son’s photo before then, but she decided to decline interviews.

Mother and son have spoken since then, and she has provided the dates of the High Holidays starting Monday night. Matt Jaffe has tried to observe them in the Marines, fasting on Yom Kippur, but it can be hard. A particular challenge was avoiding leavened bread during Passover.

“Matthew was not that kid who loved going to Hebrew school,” Meryl Jaffe said. “But he does have a Jewish identity.”

—
The post The Jewish Marine who went viral cradling a baby earned his chops keeping kids happy at a JCC appeared first on Jewish Telegraphic Agency.