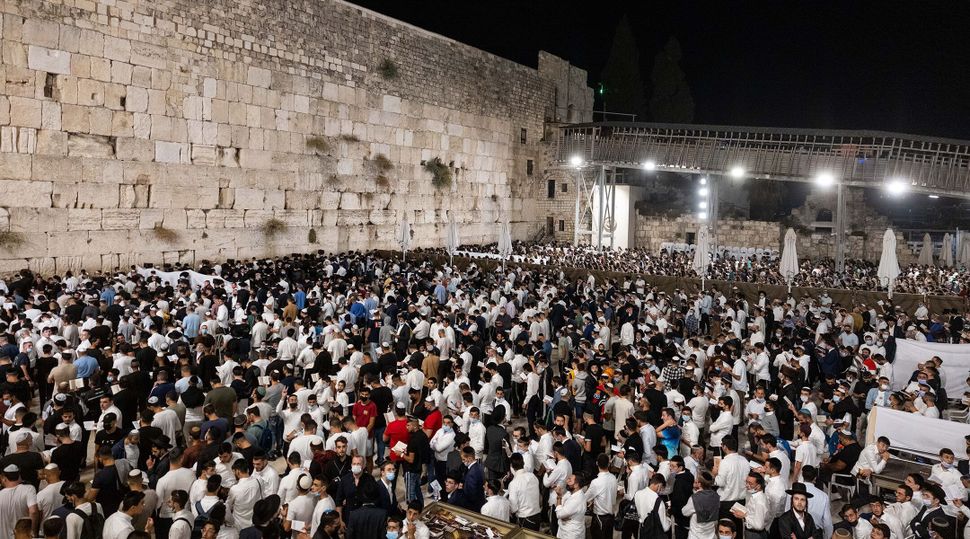 Jews at the Western Wall. By Yonatan Sindel/Flash90

Israel has 6.9 million Jews and the United States has “about 6 million,” according to an estimate by the Jewish Agency for Israel based on work by Sergio Della Pergola, a demographer from the Hebrew University of Jerusalem.

The U.S. number diverges from this year’s Pew survey on Jewish Americans, which estimated the figure at 7.5 million. The researchers for the Jewish Agency estimate consulted the Pew survey, the Jewish Agency said in a statement Sunday, shortly before the start of Rosh Hashanah, the Jewish New Year. The statement did not provide a reason for the difference.

“When also including those who are eligible for Israeli citizenship under the Law of Return, the world total rises to 25.3 million people, of which 7.3 million are in Israel and 18 million live outside Israel,” the statement said.

Ukraine was listed as having 43,000 Jews — a major difference with the 360,000 number provided by the European Jewish Congress and the Jewish Confederation of Ukraine. That would make that country the world’s fifth largest Jewish community.

In Israel, some 6.94 million Jews constitute 74% of a population of 9.39 million, according to a separate statement by the Central Bureau of Statistics. Nearly 2 million Arabs comprise account for 21% of the Israeli population.

That’s an increase of 1.5% percent in the general population in Israel and a similar rise in the Jewish population over last year. The Arab population of Israel has also seen a similar increase to about 1.98 million.