Taliban: We want ties with US and rest of the world — but not Israel 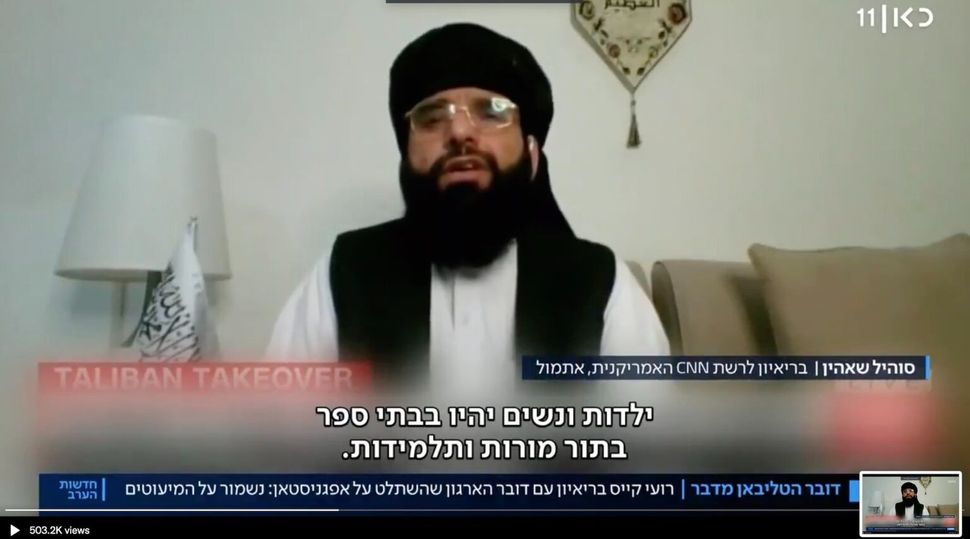 Taliban spokesman Suhail Shaheen in an interview with the Israeli broadcaster Kan. Image by Screenshot

(JTA) — The Taliban, the extremist Islamist movement once famously insular, is ready to build relations with the world — except for Israel.

Suhail Shaheen, the spokesman for the movement that assumed control of Afghanistan last month, told Sputnik News that his country is ready to work with the United States and other countries in rebuilding the Asian land.

“Yes, of course, in a new chapter if America wants to have a relation with us, which could be in the interest of both countries and both peoples, and if they want to participate in the reconstruction of Afghanistan, they are welcome,” Shaheen told the Russian government-run news agency.

“Of course, we won’t have any relation with Israel. We want to have relations with other countries; Israel is not among these countries.”

Shaheen gave an interview last month to an Israeli state broadcaster as the Taliban was taking control of the country and the Biden administration was ending America’s 20-year military presence in Afghanistan. Shaheen later said he did not realize he was speaking to an Israeli journalist.

The last time the Taliban ruled Afghanistan, from 1996 to 2001, they were known for their insularity and rejecting foreign influence and assistance.

—
The post Taliban: We want ties with US and rest of the world — but not Israel appeared first on Jewish Telegraphic Agency.

Taliban: We want ties with US and rest of the world — but not Israel