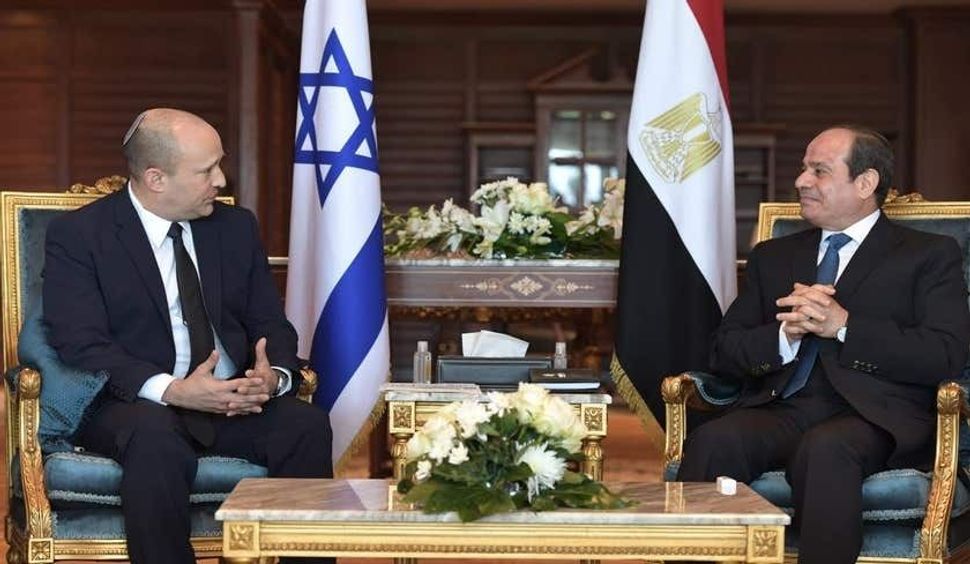 For the first time since taking office, Prime Minister Naftali Bennett met with President Abdel-Fattah al-Sissi in Sinai on Monday, and praised Egypt for its stabilizing role in the region.

Bennett described the first formal, public meeting between leaders of both countries in a decade as “important and very good. We have created a foundation for a deep connection for the future.”

According to a political source, the leaders discussed several regional issues, including Iran’s aggression in the Middle East and its nuclear threat, Turkey and its role in the war in Libya and the crisis between Egypt and Ethiopia. They also discussed significantly expanding trade between their two countries, increasing mutual tourism, as well as dealing with “Iranian aggression” and “global terror groups” in the Middle East, the source added.

They also talked about calming tensions in Gaza, as well as preventing Hamas from rearming via tightening supervision over the Rafah border crossing. Furthermore, they also touched on the return of the Israeli civilians and the bodies of two soldiers held captive by Hamas.

DPA quoted the Egyptian presidency website as saying that “The president affirmed Egypt’s support for all efforts to achieve comprehensive peace in the Middle East, based on the two-state solution and on the international resolutions … which contributes in strengthening security and prosperity for all the peoples of the region.”

It said that Sissi emphasized the importance of the international community’s support of Egypt’s building efforts in the Palestinian territories. He also called for support in Egypt’s attempts to reduce Israeli-Palestinian tensions.

Bennett was initially greeted in Sharm el-Sheikh by Egyptian Foreign Minister Sameh Shoukry and Egyptian Intelligence Minister Abbas Kamel, before retreating to the presidential compound with Sissi for over three hours.

According to the statement from Cairo before the meeting, the two leaders were expected to discuss “a number of bilateral issues in various fields,” as well as “ways and efforts to revive the peace process” between Israel and the Palestinians.

Sissi is spearheading the international community’s efforts to reach a long-term agreement with respect to Gaza since the last round of fighting in May.

For Bennett, the meeting could solidify his regional standing, whereas for Sissi it is seen as a way to strengthen ties with the U.S. administration.

The meeting, in the resort town of Sharm el-Sheikh in the Sinai Peninsula, comes a day after Palestinian militants fired rockets into Israel from the Gaza Strip for the third night in a row.

The two leaders first met in private, and were then set to attend a wider meeting with teams from both countries.

“Egypt sees relations with Israel and efforts to rebuild Gaza as a path to the White House,” an Israeli official said, adding Cairo “needs it” to deflect international pressure over its human rights record.

The official added that Israel’s U.S.-brokered normalization deals with several Arab states signed last year made it easier for the Egyptians to be more public about their communication with Israel.

Ahead of Bennett’s meeting with al-Sissi, Foreign Minister Yair Lapid presented on Sunday a new proposal for the development of the Gaza Strip, saying that Israel’s policy since it withdrew from the coastal enclave in 2005 – includes restrictions on movement and commerce – has not been effective in preventing attacks by Hamas and other armed groups.

Calling for “economy in exchange for security,” which “would create stability on both sides of the border,” Lapid described his two-step plan as a “necessary policy.” Although not an official government plan, Lapid noted that both Bennett and Defense Minister Benny Gantz back his position. And while the plan, which involves overhauling Gaza’s electricity, health and transportation systems, as well as the construction of major infrastructure projects, entails concepts that are by no means new, they have not yet been implemented.

Palestinian Prime Minister Mohammed Shtayyeh said at a cabinet meeting Monday that Gaza “is a political issue,” arguing that a comprehensive plan that includes the West Bank and Jerusalem is needed in order to solve it.

Only by “ending the occupation and lifting the blockade over the Gaza Strip, and stopping (Israeli) aggression” can Gaza reconstruction be made possible, Shtayyed added. He also said the Palestinian Authority is ready to “discuss any proposal” to allow Qatari aid money into Gaza.

Last month, Bennett and Gantz met with Egyptian intelligence chief Abbas Kamel. According to the Prime Minister’s Office, Bennett and Kamel discussed the political, security and economic aspects of Israeli-Egyptian relations, as well as Egypt’s role as a key mediator between Israel and Hamas following the latest round of fighting in May. At the meeting, Kamel invited Bennett to visit Egypt and meet with al-Sissi. At the same time, a senior member of Israel’s defense establishment visited Egypt as part of efforts to advance Gaza’s reconstruction and bring about lasting calm.

Bennett and al-Sissi first spoke in June, about two weeks after the new government was formed. A statement issued by the Prime Minister’s Office at the time emphasized Israel’s ongoing efforts to come to an agreement on the repatriation of several longtime Israeli captives and bodies of Israeli soldiers. A statement from al-Sissi’s office said the Egyptian president highlighted the need to reach a permanent arrangement with the Palestinians, and reiterated the Egyptian drive to help rebuild the Gaza Strip.

Reuters and DPA contributed to this report.