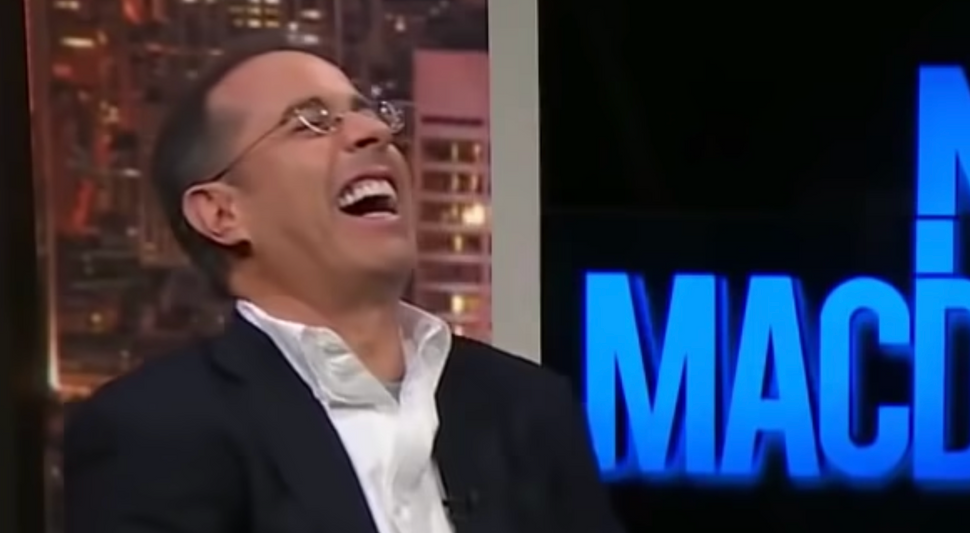 Jerry Seinfeld cracked up by Norm Macdonald By YouTube

Macdonald’s stand up made him famous, but his talk show appearances with Howard Stern, Conan O’Brien, David Letterman and other hosts made him legendary.

“There may be people as funny as Norm Macdonald,” Letterman once said, “but no one is funnier.”

In all those appearances, two now-famous nuggets of Jewish humor sparkle.

“You know with Hitler…”

During an appearance on “The Late Show with David Letterman,” Macdonald related his experience traveling to Holland, which his late father, who fought in World War II as a Canadian soldier, helped liberate.

Macdonald brought the house down with this one simple, deadpan line:

Macdonald got a bit more play out of the Fuhrer in his Netflix special, “Hitler’s Dog,” named for the one living creature who likely loved him unconditionally.

This one you need to invest a few rewarding minutes in watching from start to finish. Suffice it to say that when Norm Macdonald delivers an offhand, two word comeback to Jerry Seinfeld at the end of Seinfeld’s long Jewish joke, Seinfeld himself loses it.

The setting is Macdonald’s small scale eponymous talk show. Seinfeld has just finished a long explanation of how gentiles often miss Jewish humor. He illustrates it by telling a classic Jewish joke (funny) that he promises Macdonald won’t understand. Macdonald, indeed, doesn’t get it (funnier). Then, later, as the show wraps, Seinfeld asks Macdonald if he makes any money doing the show. Macdonald says he doesn’t think so. Seinfeld can’t believe a comedian would show up anywhere for free. Macdonald shrugs, “Ah, gentile.” (Funniest).

“Norm,” said Sarah Silverman, “was in a comedy genre of his own. No one like him on this planet. Please do yourself a favor and watch his stuff.”

Amen, and rest in peace.

Norm was in a comedy genre of his own. No one like him on this planet. Please do yourself a favor and watch his stuff. He was one of a kind of all time