Ida Nudel, for years the face of Jewish persecution in the Soviet Union, dies at 90 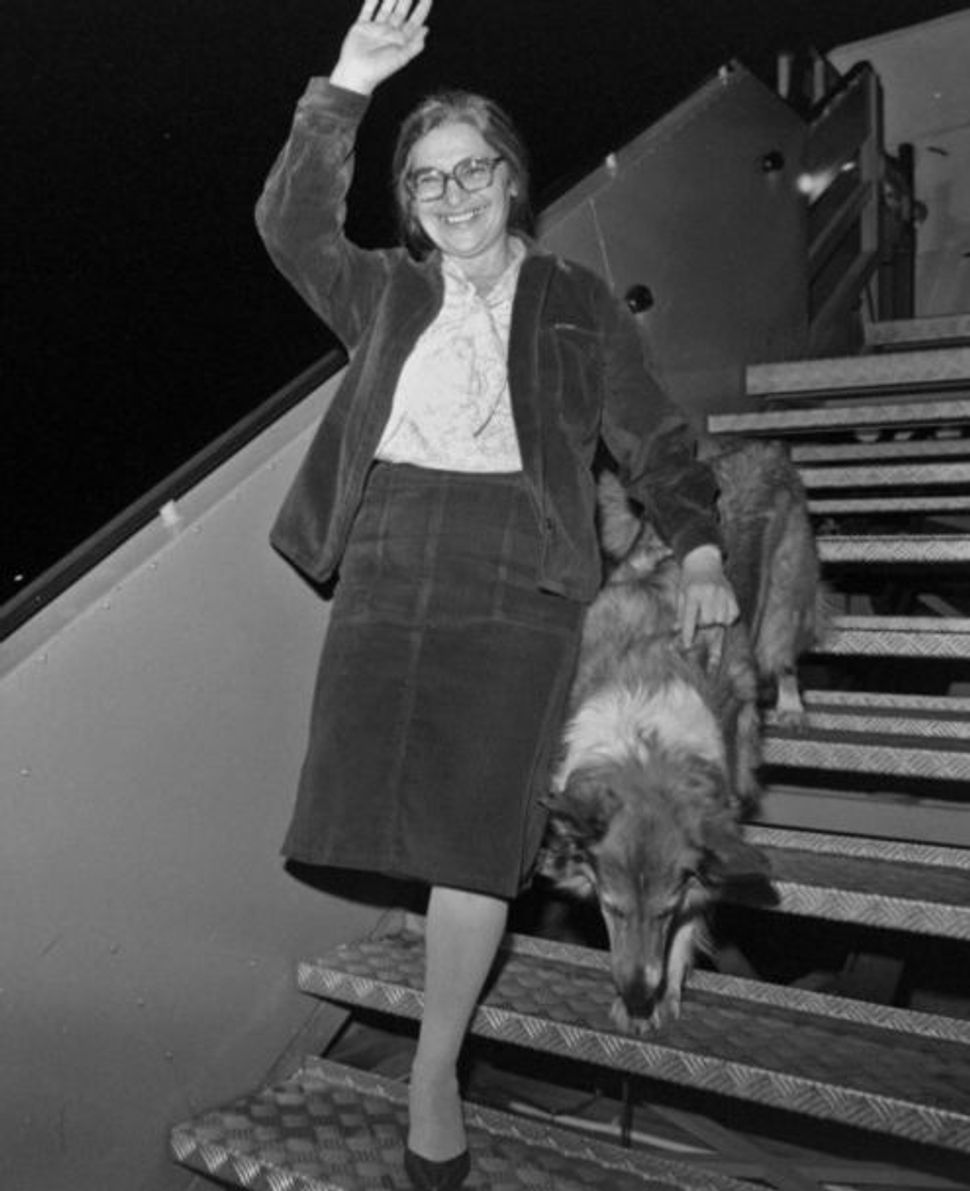 Ida Nudel and her faithful dog arrive at Ben-Gurion Airport on Oct. 15, 1987. Courtesy of Wikipedia Commons

The Jerusalem Post reported that she died Tuesday and was buried the same day in Tel Aviv.

Nudel, an accountant, began her activism in the 1970s after her request to emigrate to Israel was turned down. She supported Jews imprisoned for their activism and their families, delivering needed supplies and making representations on their behalf. Soviet authorities twice sent her into exile, once to Siberia and then to Moldova, and she suffered privations.

Her short stature — she was 4’11” — and her determination made her one of the most prominent faces of Jewish refusal in the Soviet Union. Women’s groups adopted her cause. Fonda and her then-husband, the activist Tom Hayden, took up her case. Liv Ullmann, the Norwegian actress, played Nudel in a movie.

Fonda met with Nudel in the Soviet Union and was in Israel in 1987 when Nudel arrived to a hero’s welcome, flown in on the private jet belonging to Jewish billionaire Armand Hammer. “Her courage and boundless hope inspired me. Ida Nudel has become a role model for me,” Fonda said then. Her arrival occasioned well wishes at the time from the leaders of Britain and France.

Schultz said his most cherished moment as secretary of state was learning that Nudel, whom he had met in Moscow, was free. “Mr. Secretary, this is Ida Nudel, I’m home,” Shultz quoted her as saying, during Senate testimony in 1988. He said he was moved to tears. “I’ve met her quite a few times since then,” he said. “Whenever I go to Israel, she comes around, and we talk and share experiences.”

Nudel, who never married or had children, was thrilled at first to be in Israel, saying she had all she needed. When reporters asked her then what she brought from Russia, she said, “My faithful dog, Pizer, who has been my constant companion since she was brought to me in Siberia as a 5-week-old puppy; my books, and the very warm blanket which I cannot do without.”

But Nudel soon soured on Israel’s government, saying it was not doing enough to absorb Jews from the former Soviet Union.

And in 2005, in an interview with the Jewish Telegraphic Agency, she worried that Israel was not Jewish enough; she also had ensconced herself in Israel’s right-wing camp, and said the West was not doing enough to counter what she perceived as the threat of Islam.

“I cry in my heart because what we dreamed of is not happening,” she said.

—
The post Ida Nudel, for years the face of Jewish persecution in the Soviet Union, dies at 90 appeared first on Jewish Telegraphic Agency.

Ida Nudel, for years the face of Jewish persecution in the Soviet Union, dies at 90