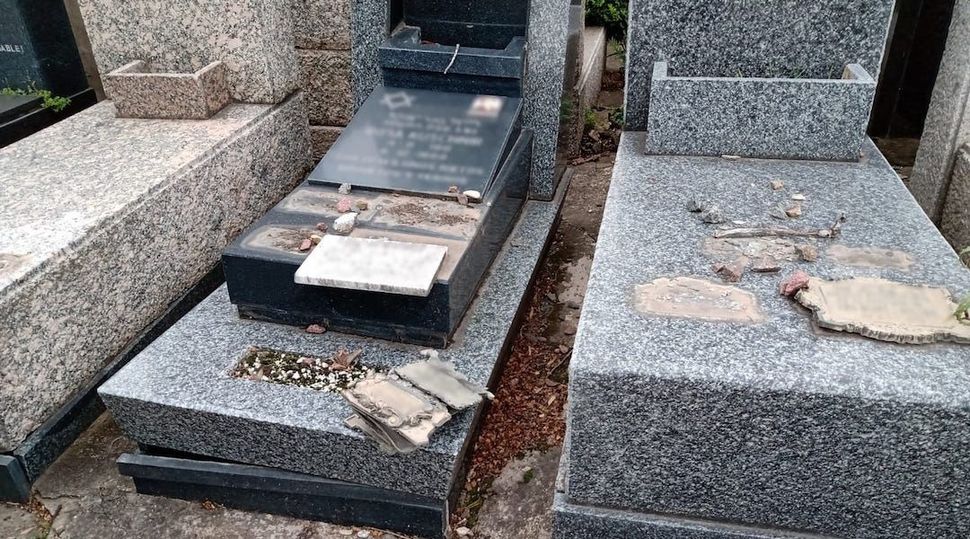 Some of the vandalized graves at the Tablada Jewish cemetery near Buenos Aires. Courtesy of AMIA

(JTA) — Local Jewish leaders are fuming about repeated security breaches at a large Jewish cemetery in the Buenos Aires area.

Just before Yom Kippur last week, three vandals were caught trying to make off with 223 of the cemetery’s gravestones — the third such robbery in the past month. Over 100 headstones were smashed at the Tablada cemetery the previous week.

One of last week’s vandals was caught while two others escaped. An investigation is ongoing.

“We are very concerned about the lack of action by Argentine authorities to protect the Jewish cemetery,” Eliahu Hamra, secretary-general of BUR, the Orthodox bloc that rules the AMIA Jewish group, told the Jewish Telegraphic Agency.

No antisemitic graffiti has been found in the cemetery after the repeated incidents, but Jewish groups still raised a high alarm. They also praised cemetery workers, who stepped in to stop the robbery without police help.

“We expect that the authorities give a definitive solution to the problem of insecurity and lack of protection, we need that the necessary measures be taken urgently. It seems like there is a ‘free zone,’” AMIA President Ariel Eichbaum told JTA.

According to AMIA, the Tablada cemetery is the largest Jewish one in Latin America. Inaugurated in 1936, it covers nearly 100 acres and contains more than 130,000 graves. It is located 13 miles east of Buenos Aires.