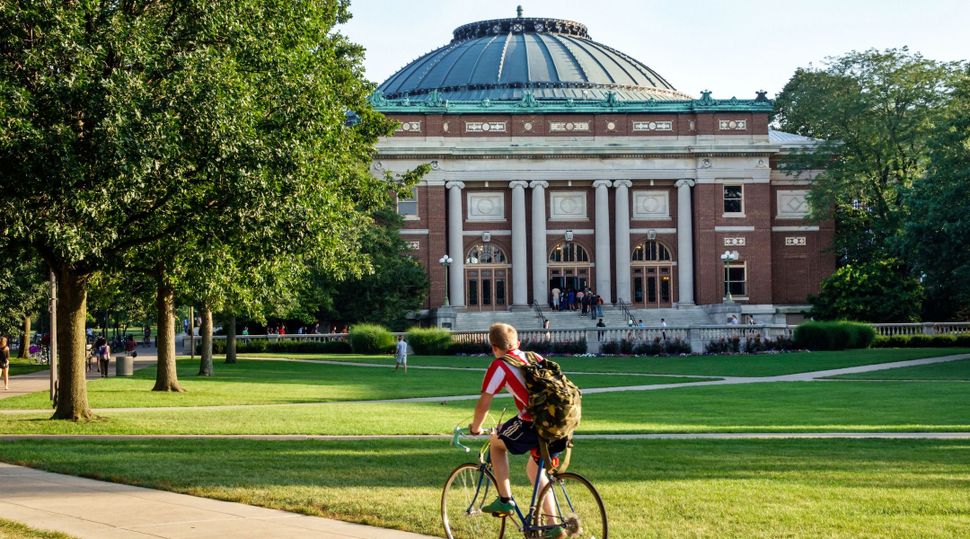 A student bikes across campus at the University of Illinois at Urbana-Champaign. Courtesy of Getty

(JTA) — A survey of members of AEPi and AEPhi, the most prominent national Jewish fraternity and sorority, found that large numbers of respondents have experienced antisemitism on campus.

The survey also found that about half of respondents have felt the need to hide their Jewish identity on campus or in virtual campus settings. A slim majority said they “are somewhat or very reluctant to share their views on Israel,” according to the survey.

The survey was commissioned by the Louis D. Brandeis Center for Human Rights Under Law, a legal organization that aids Jewish and pro-Israel college students. It was conducted by Mike Cohen of the Cohen Research Group in Washington, D.C. The survey was conducted last April, before the spike in antisemitism in the United States surrounding the Israel-Gaza conflict the following month.

The survey was made available to all AEPi and AEPhi members nationally, and 1,027 chose to respond — 710 of the 5,158 AEPi students and 317 of 3,310 AEPhi students. It is unclear how representative the respondents are of AEPi and AEPhi as a whole, though Cohen said it was an unusually high response rate.

The survey comes amid concern among Jewish organizations, and Jewish campus activists, about marginalization and harassment of Jews on campus. National Jewish groups have long seen college campuses, and particularly the debate over the Israeli-Palestinian conflict on campus, as a front in the fight against anti-Jewish bigotry. In the past year, Jewish student activists have organized themselves to fight anti-Zionism and antisemitism online.

Those concerns have reached the highest levels of government. Kenneth Marcus, the founder of the Brandeis Center, served as assistant U.S. secretary of education for civil rights under President Donald Trump. In 2019, Trump signed an executive order mandating “robust” enforcement of civil rights protections for Jews on campus, which included some anti-Israel activity in the definition of antisemitism. The order prompted a series of federal complaints alleging antisemitism at campuses in the U.S., some of which were filed by the Brandeis Center.

The survey found that half of AEPi respondents, and two-thirds of AEPhi respondents, had personally been targeted with an antisemitic comment in the 120 days before the survey was taken. Cohen said the higher number of sorority members who experienced antisemitism was due partially to their having been called gendered terms such as “Jewish American Princess.”

Roughly a quarter of each group said they heard offensive jokes about Jews. A slightly lower number said they heard people repeat age-old antisemitic stereotypes about Jews being greedy or cheap. Smaller percentages reported hearing offensive statements about Israel, like comparing Israel’s actions to those of the Nazis.

More than 60% of students in AEPi and AEPhi said that at some point, they have felt unsafe as Jews on campus or in virtual campus settings. Most of both groups said they’re worried about verbal attacks, and about a third of each group said they’re worried about online harassment or being “marginalized or penalized” by a professor, according to the survey. About one in six respondents feared a physical attack.

The survey found that more than 80% of both groups consider other Jews their extended family and are supportive of Israel. A majority of respondents has been to Israel.

“These findings ring some pretty consequential alarms, more closely resembling previous dark periods in our history, not the 21st century in the U.S.,” Marcus said in a statement. “They reveal that students for whom being Jewish is a central or important aspect of their identity are feeling increasingly unsafe visibly expressing their Judaism for fear of harassment, social bullying and other anti-Semitic attacks.