‘Yes, I wept’: Alexandria Ocasio-Cortez explains her ‘present’ vote on Iron Dome, and the tears that followed 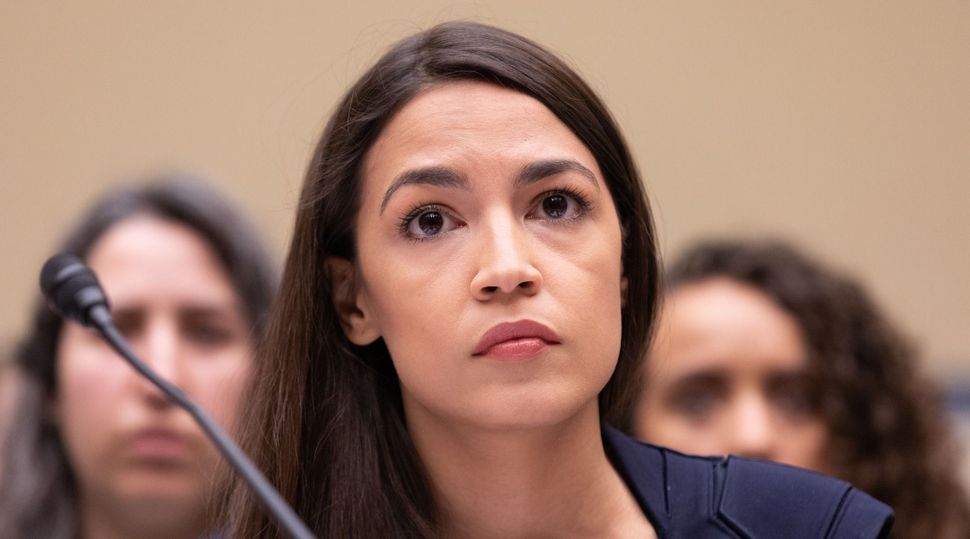 Alexandria Ocasio-Cortez at a House committee hearing, July 12, 2019. She said Dov Hikind had a “First Amendment right to express his views and should not be blocked for them.” (Aurora Samperio/NurPhoto via Getty Images)

WASHINGTON (JTA) — Alexandria Ocasio-Cortez, the progressive congresswoman from New York, said she changed her vote from “no” to “present” on a bill for special funding for Israel’s anti-missile Iron Dome defense system because of the “panic and horror” that seized the moment.

Ocasio-Cortez could be seen weeping on the floor of Congress Thursday after casting her vote. She was one of 11 representatives, including the other members of “the Squad” of progressives, who did not vote to support the $1 billion in Iron Dome funding; 420 representatives voted for the bill.

In a letter to her constituents in New York that she posted to Twitter Friday, Ocasio-Cortez said she was inclined to vote “no” at first because she opposes giving “unconditional” aid to Israel while “doing nothing to address or raise the persistent human rights abuses against the Palestinian people.” She did not explain what caused her to switch her vote to “present.”

She also emphasized that opposing the Iron Dome funding would not affect the ongoing support Congress has already approved for the system, which Israel says has saved lives by intercepting rockets aimed at civilian targets. The new funding, which Israel requested and the Biden administration approved, is meant to replenish the anti-missile system after Israel’s May conflict with Hamas in Gaza.

Most of all, Ocasio-Cortez said, said she objected to how the Democratic leadership at first tried to slip the vote for the $1 billion into an emergency stopgap spending bill earlier in the week. Ocasio-Cortez, joined by other progressives, forced the leadership to strip that money from the stopgap bill, leading to a standalone vote on the Iron Dome funding.

Ocasio-Cortez said she had pleaded with Democratic leaders to slow down the process, allowing time for constituents such as hers in New York’s 14th Congressional District to give feedback on the bill. The fact that the vote took place so quickly, she said, was “reckless” and led to “vitriol, disingenuous framing” and “hateful targeting.”

The process, she said, “created a real sense of panic and horror among those in our community who otherwise engage thoughtfully in these discussions.” She did not offer specifics but said that was the reason for her show of emotion.

“Yes, I wept,” Ocasio-Cortez said in the statement. “I wept at the complete lack of care for the human beings that are impacted by these decisions. I wept at an institution choosing a path of maximum volatility and minimum consideration for its own political convenience. And I wept at the complete lack of regard I often feel our party has for its most vulnerable and endangered members and communities.”

The other Democrat who voted “present,” Hank Johnson of Georgia, also did not explain why he chose not to vote “no” in a statement Friday to the Atlanta Jewish Times. He said he backed $3.8 billion in military aid to Israel under former President Barack Obama but did not believe an additional $1 billion was justified now.

—
The post ‘Yes, I wept’: Alexandria Ocasio-Cortez explains her ‘present’ vote on Iron Dome, and the tears that followed appeared first on Jewish Telegraphic Agency.

‘Yes, I wept’: Alexandria Ocasio-Cortez explains her ‘present’ vote on Iron Dome, and the tears that followed