Plant-Based Impossible Pork Is Here. But Will It Be Kosher? 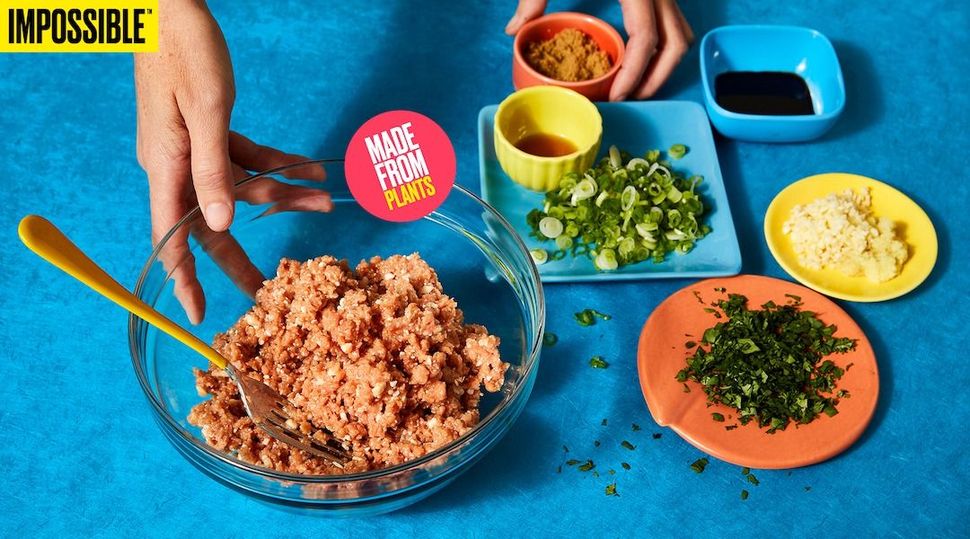 (JTA) — Impossible Foods, the plant-based meat company, is releasing a long-awaited new product — but unlike the wildly popular Impossible Burger, it won’t be kosher.

The largest and most influential certifier of kosher products in the world has declined to endorse Impossible Pork, even though nothing about its ingredients or preparation conflicts with Jewish dietary laws.

“The Impossible Pork, we didn’t give an ‘OU’ to it, not because it wasn’t kosher per se,” said Rabbi Menachem Genack, the CEO of the Orthodox Union’s kosher division. “It may indeed be completely in terms of its ingredients: If it’s completely plant-derived, it’s kosher. Just in terms of sensitivities to the consumer … it didn’t get it.”

For Jews who keep kosher, the Impossible Burger has allowed some food experiences that would otherwise be off-limits because of the prohibition in dietary law on mixing milk and meat. For the last five years, Jews and kosher restaurants have been able to serve up cheese-topped chili, greasy cheeseburgers, and that quintessential American diner pairing: a hamburger with a milkshake.

“The Impossible Burger itself is a huge, huge success and people really, really like it,” Genack said. “It’s a really excellent, excellent product in every respect.”

With the new product, Impossible Foods wanted to give that same experience to Jews and Muslims who do not eat pork, along with others who are seeking to avoid animal products or reduce their environmental impact.

But Genack said he and others at the OU recalled what happened when they once certified “bacon” that wasn’t made of pig.

“We still get deluged with calls from consumers who either don’t get it or they’re uncomfortable with it,” he said.

The OU certifies other products that might seem to conflict with Jewish dietary law, explaining on its website that “a fish sauce may display a picture of a non‐kosher fish, the OU may appear on artificial crab or pork, or there may be a recipe for a non‐kosher food item on the label.” It even certifies other products that aim to replicate the pork experience, such as Trader Joe’s “spicy porkless plant-based snack rinds.”

“We of course discussed it with the company and they understood,” he said.

For Impossible Foods, the word “pork” is here to stay.

“While Impossible Pork was originally designed for Halal and Kosher certification, we aren’t moving forward with those certifications as we wish to continue to use the term ‘Pork’ in our product name,” an Impossible Foods spokesperson told JTA in an email.

The decision means Impossible Pork won’t be on the menu at kosher restaurants, which must use only kosher-certified products in order to retain their own kosher certification. That includes kosher and/or vegan Asian restaurants with mainstay dishes that would typically include pork, such as the dumplings and dim sum that marked Impossible Pork’s first outings this week in New York and Hong Kong. 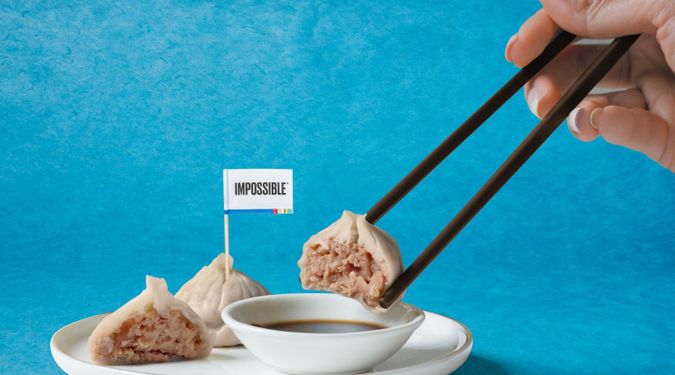 It also means that Jews who seek to follow traditional dietary rules will have to make their own freighted decisions about Impossible Pork — including whether to follow the OU’s ruling.

“I don’t think the OU labeling on it has a huge impact on me,” said Rabbi Justin Held, the director of Jewish education at Herzl Camp and the University of Minnesota Hillel, who described himself as a “huge Impossible fan.”

But he said he was concerned about marit ayin, or appearance to the eye, a concept in Jewish law that prohibits actions which appear to violate Jewish law, even if they technically do not. The concept raises the concern that someone who sees Held eating an Impossible Pork banh mi sandwich, for example, might think that he eats non-kosher meat.

A different concept, lifnei iver, or not placing stumbling blocks before the blind, could also come into play. The concept raises a related concern: whether someone who sees an observant Jew eating Impossible Pork dumplings could conclude that pork must actually be kosher.

For Held, the issues related to dietary law pale in comparison to the ick factor of consuming something that replicates one of Judaism’s strongest taboos — and even that isn’t enough to keep him away.

“The word pork is definitely a gross aversion to me,” he said. “But knowing it’s not [pork], I will try it.”

Rena Kates, an attorney in Baltimore, isn’t sure she will. Like Held, Kates keeps kosher and also uses ingredients, not an agency’s certification, as her guide for whether food is acceptable.

An avid consumer of plant-based meat products, she doesn’t think she can stomach Impossible Pork.

“I have this visceral reaction to it,” she said. “There is something about pork that is just triggering.”

It was that reaction, Genack said, that swayed the OU’s decision-making — though he said Impossible Pork came close to carrying the agency’s label, and still could one day.

“It could have gone either way, frankly,” Genack said. He added, “This is something which we absolutely would be willing to review in the future.”

—
The post Plant-based Impossible Pork is here. But will it be kosher? appeared first on Jewish Telegraphic Agency.

Plant-Based Impossible Pork Is Here. But Will It Be Kosher?