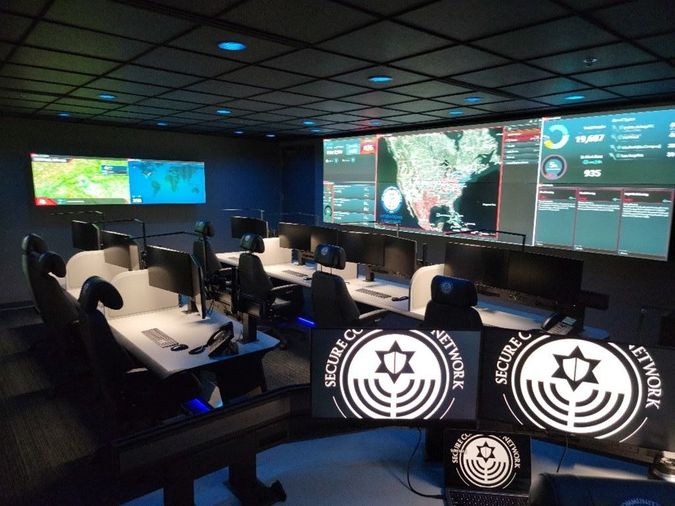 The new command center of the Secure Community Network opened just before the High Holidays this year, and aims to help Jewish communities better track and respond to threats.

“We heard the message loud and clear – more needs to be done to protect the Jewish community,” said Michael Masters, national director and CEO of SCN.

He called the new facility “a significant step forward in protecting our people” that “integrates a highly advanced proprietary stack of technology” which alerts monitors to incidents in real time.

And he said he is proud of its initial results.

The new center opened just before the High Holidays and operates around the clock to monitor and analyze intelligence reports. The F.B.I. reported a nearly 60% increase in religiously motivated hate crimes targeting Jews last year.

The custom-designed command center features a 16-foot video wall to allow for optimal incident tracking and response, workstations and audio/visual capabilities for live or recorded briefings. The video wall tallies incident reports but also potential threats nationwide. The facility has seating for eight but can accommodate additional staff during an incident response. SCN officials said it was funded entirely with private donations, but declined to say how much it cost.

SCN was founded in 2004 under the auspices of the Conference of Presidents of Major American Jewish Organizations and the Jewish Federations of North America. Before opening the Chicago command center, SCN operated a similar facility in New York, said Malcolm Hoenlein, executive vice chairman of the Conference of Presidents. The Chicago command center is better-equipped.

The SCN worked with law enforcement at the local, state and federal levels — and also looked at best practice facilities in the private sector — to design the facility, said Masters.

He noted that last year set a record for the number and diversity of attacks on the Jewish community tracked by SCN — from violence to cyber scams — and that online crimes and threats account for between 30 and 40% of the incidents.

Online threats can be very sophisticated, he said, noting cases where hackers sent messages to targets that seemed to come from their rabbis.

“We’re seeing more and more of this,” he said.