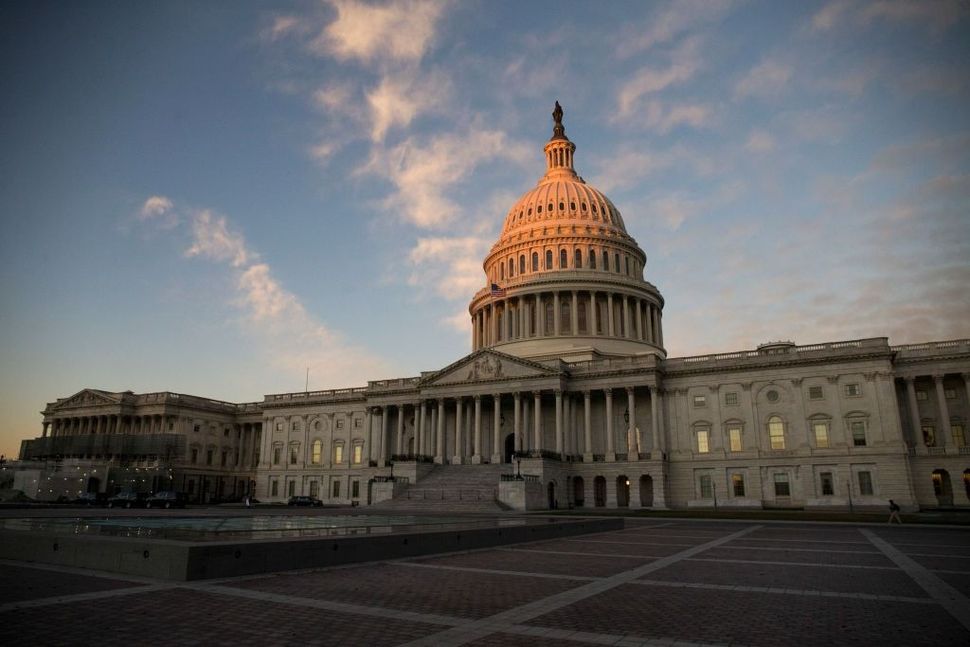 The U.S. Capitol building is pictured on November 7, 2018 in Washington, DC. Image by Getty Images

Rep. Marjorie Taylor Greene sparked outrage when she called on “rational” Jewish people to back her claim that mask mandates are comparable to the Holocaust. The Georgia Republican later apologized and visited the U.S. Holocaust Memorial Museum in Washington, D.C.

Then there’s Rep. Madison Cawthorn, a Republican from North Carolina, who made a similar comparison about possible vaccine passports.

But many more GOP candidates are drawing comparisons between vaccine and mask mandates and Nazi atrocities, and Democrats have highlighted the frequency — particularly in the U.S. House, which they fear may swing to Republicans after the 2022 midterm elections.

“It’s clear House Republicans are willing to put Americans’ health and economic well-being on the line in the name of spreading offensive and disturbing disinformation,” said DCCC spokesperson Elena Kuhn.

At least four Republican House candidates, running in key battleground districts in the 2022 midterm elections, have promoted the idea that strategies to prevent the spread of COVID-19 are comparable to the sufferings of Hitler’s victims.

Here is what they have said:

Derrick Van Orden, the leading Republican candidate for the open seat in Wisconsin’s third congressional district, said in a podcast interview earlier this year that COVID-19 contact tracing was “what the KGB used to do in the Soviet Union and the Stasi used to do in East Germany” and agreed with the host that “the Nazis did the same thing.”

The district is one of seven in the nation held by a Democrat that voted for former President Donald Trump in both 2016 and 2020. However, Rep. Ron Kind recently announced he won’t seek re-election after 25 years, making it a top target for the Republicans next year. Van Orden was on the grounds of the U.S. Capitol during the Jan. 6 riot, and is backed by Trump and House Minority Leader Kevin McCarthy.

Jarome Bell, a leading pro-Trump candidate who is running in the GOP primary for Virginia’s 2nd Congressional District, compared vaccine mandates to the Nazi Party’s eugenics programs. “If we choose not to, our lives shouldn’t change nor should we be subjected the Nazi-style treatment of being marked,” he said in a June interview with the National File, a right-wing website that promotes views that contradict facts about the COVID vaccines and the 2020 presidential election.

Bell, who is seeking to challenge incumbent Rep. Elaine Luria — a Jewish Democrat who was first elected in 2018 as part of a blue wave that flipped districts that had voted for Trump in 2016 — compared NFL players wearing wristbands to show their vaccination status to “Dachau or Auschwitz serial numbers” in a post on his now-suspended Twitter account.

Congressman Scott Perry, who represents Pennsylvania’s 10th Congressional District since 2019, equated criticism of the Great Barrington Declaration against lockdowns and of Trump’s assertion that hydroxychloroquine was an effective COVID-19 treatment with Nazi book burnings.

Perry, who is on the list of 2022 targets by the Democratic National Committee, also invoked the Nazis in a tirade against the Democratic Party earlier this year.

Mike Detmer, a Republican who withdrew from the race to represent Michigan’s 8th Congressional District on Friday, claimed in a recent Facebook post that the CDC proposed “internment camps” for unvaccinated Americans and that it was “the same thing Hitler did to the Jews.” Detmer came in a close second in the GOP primary to challenge Democratic incumbent Rep. Elissa Slotkin in 2020. In his Friday announcement, Detmer said he was running for the Michigan State Senate instead.

The district is one of three in Michigan races that the National Republican Congressional Committee put on its list of 2022 targets.