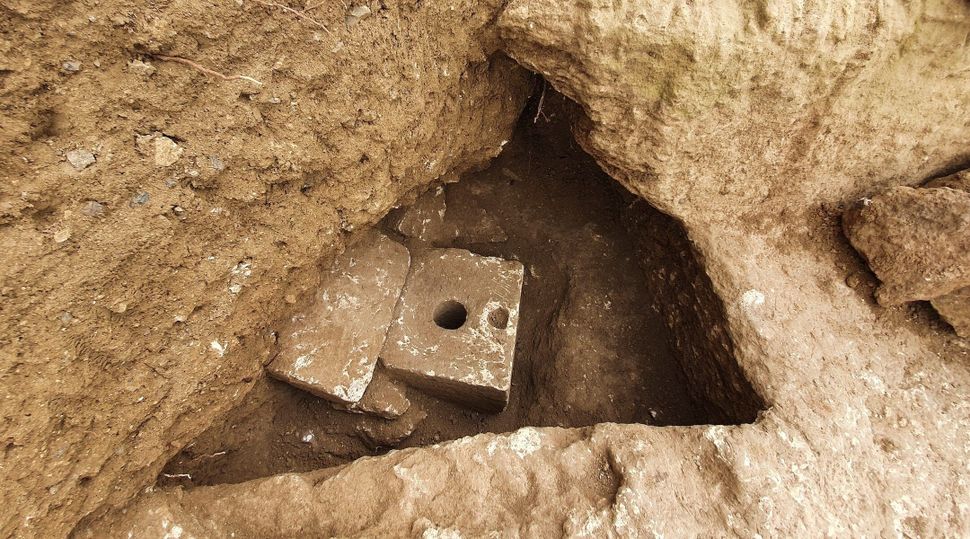 The toilet was carved from limestone and was built with a septic tank underneath it. (Yoli Schwartz/Israel Antiquities Authority)

(JTA) — A 2700-year-old toilet from the days of the First Temple in Jerusalem has been discovered by Israel’s Antiquities Authority. Built as a private toilet stall at a time when few could afford such a luxury, the toilet set to be unveiled to the public tomorrow at an archaeology conference, though for viewing only.

Carved from limestone, the toilet appears much like the modern-day fixture with a hole at the center leading to a septic tank. At the time the ancient toilet was in use, private toilets were the exclusive province of the rich.

“A private toilet cubicle was very rare in antiquity, and only a few were found to date, most of them in the City of David. In fact, only the rich could afford toilets. A thousand years later, the Mishnah and the Talmud raised various criteria that defined a rich person, and Rabbi Yossi suggested that to be rich is ‘to have the toilet next to his table,’” said Yaakov Billig, who directed the dig for the Israel Antiquities Authority.

Archaeologists plan to use the septic tank below the toilet to investigate what people living in the First Temple Period might have eaten and to better understand diseases of that time period.

The toilet was found on the site of a large estate on the Armon Hanatziv promenade in Jerusalem. The estate, in which archaeologists also found rare columns and stone capitals as well as evidence of a garden planted with ornamental trees, overlooked the Temple Mount.