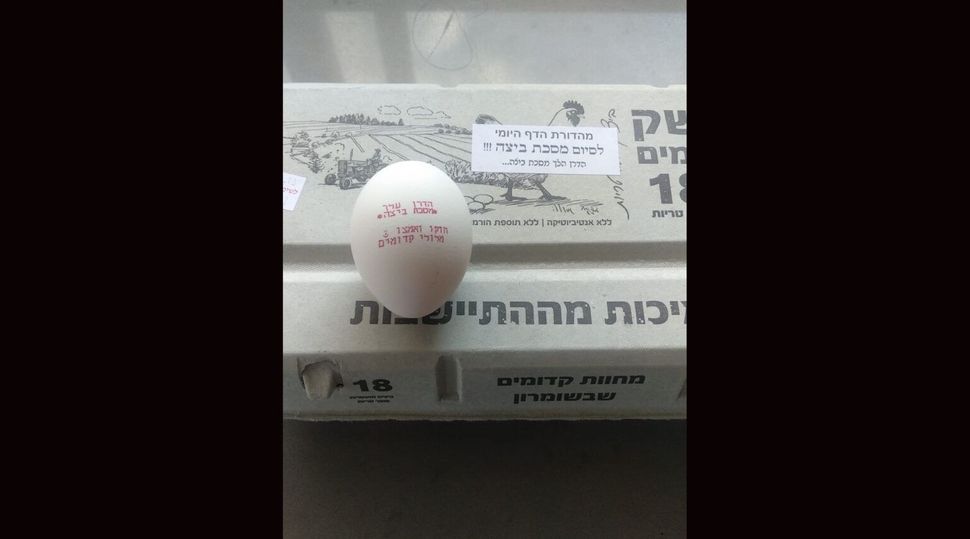 Meshek Kedumim, an egg farm in Israel, printed a message to participants in the Daf Yomi Talmud study program in honor of the conclusion of Tractate Beitzah, which means “egg.” (Facebook)

(JTA) — As participants in the Daf Yomi, a program in which participants study one page of Talmud each day, near the end of the current tractate, an Israeli chicken farm decided to join in the celebration.

“We will return to you, Tractate Beitzah,” the eggs read in Hebrew. “Be strong and take courage, from the chicken coops of Kedumim.”

Daf Yomi participants will complete Tractate Beitzah, so named because it begins with a story related to an egg, next week before continuing on to Tractate Rosh Hashana.

The entire Daf Yomi cycle, in which participants study one double-sided page of the 37 tractates of the Talmud each day in order, takes about seven and a half years to complete. At the end of the cycle, celebrations are typically held, including a massive gathering at MetLife Stadium.