Governor Gavin Newsom used a visit to Los Angeles’s Museum of Tolerance to announce millions in funding to Holocaust museums and education initiatives across the state, and to launch the Governor’s Council on Holocaust and Genocide Education, and highlight key budget investments that ensure mass genocides, like the Holocaust, are not forgotten. 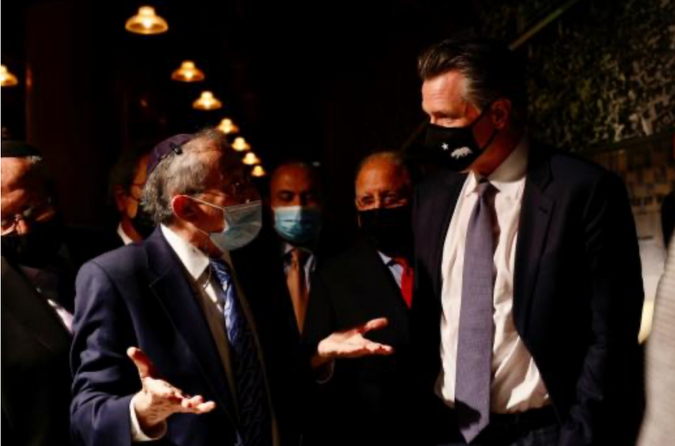 “We find ourselves in a moment of history where hate pervades the public discourse,” said Newsom. “National surveys have indicated a shocking decline in awareness among young people about the Holocaust and other acts of genocide. But in California, we are offering an antidote to the cynicism that this is how things are, and responding to that hate the best way we know how – with education and empathy.”

According to the governor’s office, the Council create a volunteer speaker’s bureau that will include Holocaust survivors to bring Holocaust and genocide education to classrooms, support schools in dealing with acts of bigotry or discrimination, and host educational events and seminars.

The council announcement follows major allocations of the state budget to Holocaust education.

As part of his “California Comeback Plan” budget, Newsom allocated $10 million for the Museum of Tolerance to create a new exhibit on antisemitism, $1 million for the renovation of the Tauber Holocaust Library in the Bay Area, and $2.5 million for expansion of the Holocaust Museum LA, on top of $6 million invested in 2019.

The plan also allocated $2 million for Holocaust-focused nonprofits to develop curricula on the Holocaust and genocide.

The announcement came at a press conference after museum founder Rabbi Marvin Hier led the governor on a tour of new museum exhibits.

It also came as the governor is facing pressure from some Jewish groups to veto a bill that would make ethnic studies a high school graduation requirement. Newsom nixed a similar idea last year, after Jewish groups and the California Jewish Caucus opposed a version of the curriculum that excluded California Jews and contained content they said was anti-Israel.

Some Jewish groups and activists say the new bill gives school districts too much latitude in modifying or replacing aspects of the curriculum. State legislators who make up the Jewish Caucus support signing, writing in a statement that the curriculum and bill have enough “guardrails” to move forward.