Israel hints Oman is next to join Abraham Accords 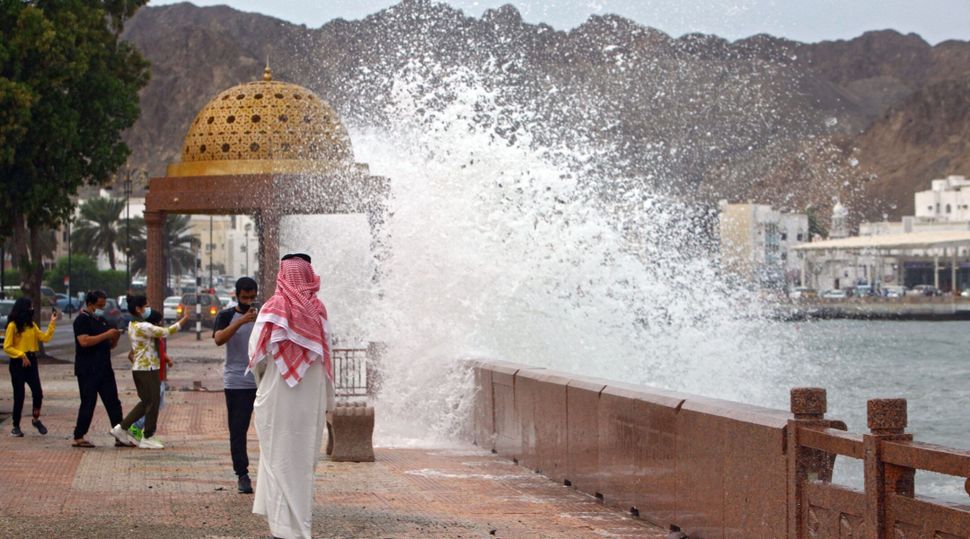 High waves break on the sea side promenade in the Omani capital Muscat, Oct. 2, 2021. (Mohammed Mahjoub/AFP via Getty Images)

(JTA) — A top Israeli foreign ministry official suggested that Oman will likely be the next country to join the Abraham Accords, leading to full normalization between the countries.

Eliav Benjamin, the head of Israel’s foreign ministry’s bureau of the Middle East and Peace Process Division, met via Zoom with reporters on Tuesday to discuss the status of the accords reached last year between Israel and the United Arab Emirates, Bahrain, Morocco and Sudan.

Asked which country might be next, Benjamin singled out Oman as a country that Israel has sustained low-level relations with since 1991, when a round of peace talks were held in Madrid.

“With Oman, we have ongoing cooperation and plans,” Benjamin said, noting that it was one of a handful of Arab countries to allow Israel to establish an interests office after the 1993 Israel-Palestinian Oslo agreement. Those offices shut down after the launch of the Second Intifada in 2000, during which Palestinians killed nearly 1,000 through suicide bombings and other attacks.

Despite that setback, Israel remains involved in MEDRC, a freshwater research facility established in Oman in 1996, Benjamin said. “So we already have the relations with Oman,” he said.

He suggested that Oman might opt for full normalization sooner rather than later.

Sustaining and expanding the Abraham Accords is a rare area of shared foreign policy between the Trump administration, which last year brokered the accords, and the Biden administration.

“I really hope that when we meet, if not before, his time next year we will be able to talk about our countries that have joined,” Benjamin said.

Israel hints Oman is next to join Abraham Accords