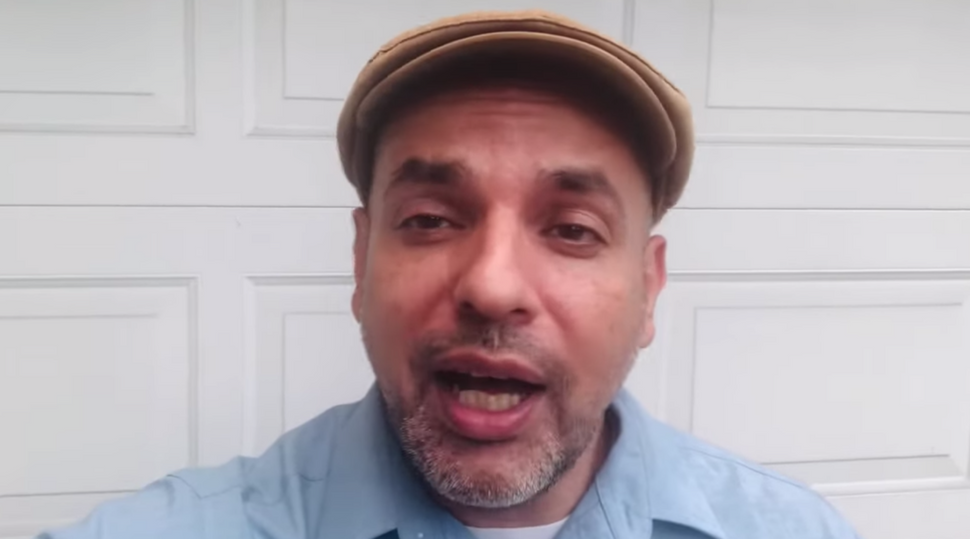 Rabbi Asher Meza, in addition to supporting anti-vaccine activists, has bucked the wider Orthodox community in other ways. (Screenshot)

(JTA) — Who are the rabbis writing religious exemption letters for Jews (and others) who oppose COVID-19 vaccine mandates?

One answer came this week when a New York City teacher said she’d gotten a letter from a rabbi who was penalized by Chabad for his anti-vaccination rhetoric.

Another answer came Thursday in a Miami New Times report about a local rabbi and YouTuber with a history of taking fringe positions. The rabbi, Asher Meza, says he signed 200 letters in the last week and a half giving people a religious excuse for sidestepping workplace vaccine mandates — even though the vast majority of Jewish clergy say there is no basis for such a exemption in Jewish tradition.

Contacted by the Jewish Telegraphic Agency, Meza said he personally has been vaccinated against COVID-19, but he doesn’t believe others should be forced to. The letter, which four other rabbis from Florida and New York also signed, cites several Biblical passages to support the argument that vaccination “puts us in direct conflict with biblical mandates to preserve one’s own life.”

The letter puts Meza and his co-signers in conflict with the vast majority of rabbis, across denominations, who have urged their congregants and followers to get the vaccine. Public service announcements urging vaccination by more than 20 Orthodox rabbis in Baltimore and Long Island went viral in August.

Instead, it puts him in line with a small number of haredi Orthodox rabbis who have taken stands against vaccination. Those rabbis have fueled a view — held devotedly by a minority of Orthodox Jews, along with mostly right-wing vaccine critics from other backgrounds — that the vaccines are dangerous and that other treatments that have been discredited by the medical establishment are preferable.

Meza — who says he studied in Israel, did Jewish outreach work there, and got religious ordination from a rabbi who now lives in New York — has long defied religious norms, and also and allied himself with the American far-right.

Arguing that the conversion process offered by mainstream Orthodox bodies is more stringent than what foundational Jewish legal authorities describe, he offers a fast-track conversion course that includes listening to his podcast. He openly proselytizes and is planning trips to India and the Philippines to convert students there.

Meza has also gotten involved with the Proud Boys, the far-right organization with links to antisemitic groups at the center of several violent protests in recent years. He said he had worked on websites for the group and donated to it, and on Telegram, the secure messaging site popular with far-right activists, he goes by “Rabbi PB.”

That’s where the Miami New Times found Meza advertising his exemption letter, which he says he has signed for Jews and non-Jews alike under the auspices of his own organization, called Torah Judaism International. He also advertised the letter on Facebook and YouTube. He does not know whether the letters have been effective in sidestepping mandates.

A local Orthodox rabbi who said he is unvaccinated and also said he used to be friendly with Meza told the New Times that Meza was “a hack” who is “not recognized by any religious community that I know of.”

For his part, Meza told JTA that he is a Proud Boys supporter, but said he considers himself first a devoted Orthodox Jew.

“Ideologically, I guess there’s no difference between supporting the movement and being in the movement itself,” he said of the Proud Boys. “But I consider myself more a student of Torah and a family man, and I’m not out to hurt people.”