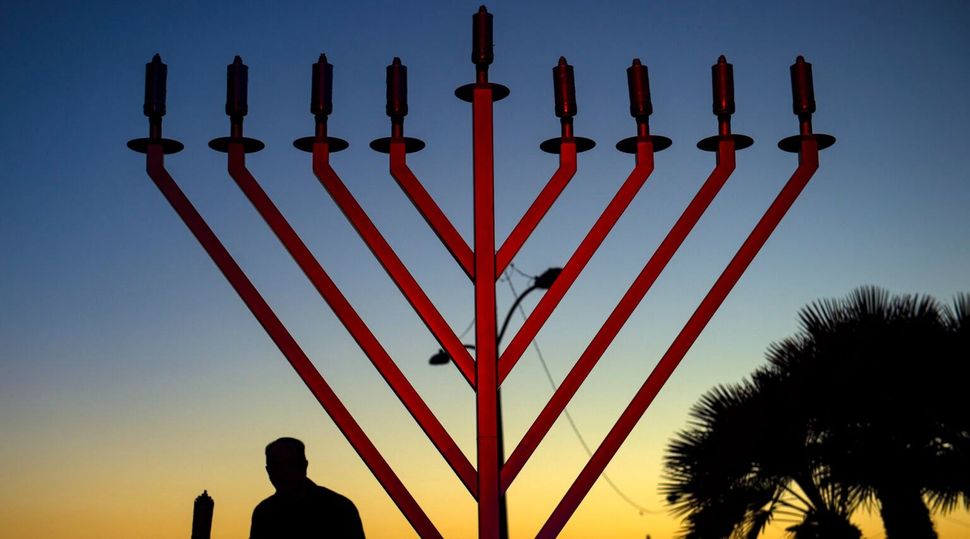 (JTA) — A new lawsuit claims that the man who crafted what might be the most famous menorah in the world sexually abused a young girl dozens of times in the 1990s and that a rabbinical court failed to hold him accountable.

The survivor of this alleged abuse, now a 36-year-old woman living in Israel, is trying to get possession of her abuser’s brass menorah, which is normally displayed during Hanukkah at the headquarters of the Chabad-Lubavitch movement in Brooklyn.

Her lawyer says that if she succeeds, she’d consider melting it down in a symbolic act against taboos that have kept cases like hers from being known.

The craftsman behind the 6-foot-tall menorah was Hirschel Pekkar. After he died in July, an obituary on a Chabad community news site described him as “a renowned Crown Heights silversmith who created the famous Menorah which stands each Chanukah in 770 Eastern Parkway,” referring to the address of the Hasidic movement’s headquarters.

Pekkar was commissioned to forge a special Hanukkah lamp in 1982, after Chabad’s leader, the late Rabbi Menachem Mendel Schneerson, said in a speech that the arms of the menorah were originally diagonal rather than curved, citing the medieval Jewish scholar Maimonides. The lawsuit says that the impact of Pekkar’s menorah—thousands of similar pieces have been fashioned over the decades—makes it “one of the most important pieces of Jewish artwork of the 20th century.”

“We’re pursuing the menorah, because it’s so symbolic and because we want to play an active role in shaping that symbolism,” Susan Crumiller, the attorney who is representing the woman, told the Jewish Telegraphic Agency. “We hope it’s a transformative moment. We are doing this out of love for the community.”

Crumiller had initially planned to sue Pekkar under New York’s Child Victims Act, which created a two-year window to revive old abuse cases previously barred by the statute of limitations. But, then, on Aug. 5, just days ahead of the deadline, Pekkar died. Crumiller shifted her target and named Pekkar’s estate in a lawsuit filed Oct. 5. She told JTA that the death extended the legal window to sue, meaning that the Aug. 14 deadline no longer applied.

No formal estate has been established for Pekkar by his heirs, and the responsibility for the estate is being addressed in a separate court case, according to Crumiller.

It’s also unclear who formally owns the menorah, though it has been treated as the communal property of the Chabad movement since it was commissioned. For now, Crumiller has asserted a lien on the menorah on behalf of her client, meaning that she has filed a public notice that her client is claiming it.

Asked about the allegations and about ownership of the menorah, Motti Seligson, a Chabad spokesperson, said that “our hearts go out to this woman” but that Chabad would not weigh in on the case.

“We are saddened and sickened by the allegations she has made and cannot begin to imagine the trauma she has experienced,” Seligson said in a statement. “However, since these allegations are against a private individual and we are not party to the lawsuit, it’s really not appropriate for us to comment any further.”

The plaintiff claims in her lawsuit that she met Pekkar in 1991, nine years after he built the menorah for Chabad, when he began employing her father as a jewelry maker in his workshop. She was 5 years old at the time and would regularly join her father at the jewelry-making studio, which was next door to Pekkar’s apartment.

According to the lawsuit, the studio had no bathroom and so one day when the plaintiff was visiting, Pekkar volunteered to take her to use the bathroom in his apartment. Just outside the bathroom, Pekkar allegedly reached under her clothes to touch her vagina.

Afterward, the lawsuit claims, Pekkar acted in a friendly manner but told her not to share what had happened with others. This scenario repeated itself at least a dozen times, according to the plaintiff, who is referred to as “Jane Doe” in the lawsuit.

“Through these occasions, Pekkar groomed Jane, and made her believe the abuse was innocent and consensual,” the lawsuit says.

Eventually, the plaintiff’s father and stepmother discovered the alleged abuse and, according to the suit, sought to confront Pekkar. They tried to entrap him by setting up a hidden video but Pekkar spotted it and the plan was foiled, the suit says.

After that failure, the father approached the rabbinical court of Crown Heights, a panel of rabbis charged with adjudicating conflicts within the Orthodox neighborhood, according to the lawsuit. The plaintiff claims that the court heard the allegations and Pekkar’s response and issued a ruling.

The Aug. 27, 1991, ruling, which JTA reviewed, says that Pekkar admitted to one unspecified offense but not another.

“The defendant admitted that he did things that are not to be done,” the ruling says in Hebrew. “On the other hand, he did not admit to all (the heart of it) of the deception that he was accused of.”

The rabbinical court said Pekkar had been ordered to undergo treatment with an “expert counselor” but had not submitted evidence showing that he had done so.

The plaintiff’s father wasn’t satisfied with the court’s ruling but, feeling helpless, he moved on, the plaintiff claims.

“After the failed rabbinical court proceedings, [the plaintiff’s father] resigned his position with Pekkar and distanced his family from him,” according to the lawsuit. “Feeling they had no recourse, the family did not discuss the abuse, and simply pretended like nothing ever happened.”

A similar allegation would likely be handled differently today. That’s because in 2011, two members of the Crown Heights rabbinical court ruled that acts of child abuse should be reported to the police and that doing so is permitted despite the traditional prohibition against turning over members of the community to secular authorities.

The plaintiff still identifies with the Chabad movement and remains a follower of Schneerson today, the Daily Beast reported.

“For a whole decade [Schneerson] was lighting [the menorah] and loving it, and he was loving something that wasn’t holy,” she was quoted as saying. “He touched a lie. And if he knew, maybe he wouldn’t touch it.”