Jurgen Krauss, who bakes challah for his family’s synagogue, shows off his Passover-inspired pavlova in “The Great British Baking Show” tent. (Screenshot from Netflix)

This story contains spoilers about Episode 4 in Season 9 of Netflix’s “The Great British Baking Show.”

(JTA) — Jürgen Krauss, the “basically a Jewish dad” on the latest season of “The Great British Baking Show,” lived up to his reputation during Desserts Week when he produced a Passover-inspired pavlova — complete with a traditional charoset topping.

The dessert also sustains a different tradition: the internationally popular show’s habit of not getting Jewish content quite right, when host Noel Fielding badly mispronounces “charoset” while describing Krauss’ creation.

Krauss, who is from the Black Forest region of Germany, is married to a British Jew, and their family belongs to a Reform synagogue in Brighton, where the Jewish Chronicle reported he has taught a challah-baking class to children. In the first episode of this season, a Passover Seder plate is visible behind him in a scene introducing viewers to his home and family.

That proved a prescient symbol in this week’s episode, which arrived on Netflix Friday for American viewers. Judges charged the contestants with producing a flavorful pavlova, a delicate dessert made with just whipped egg whites and sugar.

Pavlovas are naturally kosher for Passover because they lack flour, and Krauss leaned into that as he designed an inspired-by-Passover version with a charoset topping and pyramids of chocolate-covered matzah. 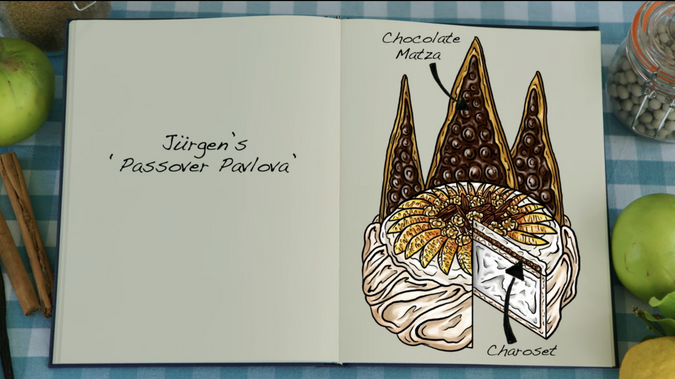 Krauss makes his charoset in the Sephardic style, using dates, oranges and cardamom while eschewing the apples and nuts that are common in Ashkenazi versions. The Seder plate staple symbolizes the mortar that the Hebrews used as slaves in Egypt.

The fan-favorite series has drawn criticism before for its handling of Jewish foods. In Season Five, the instruction to make a “plaited loaf” left some viewers wondering if anyone on the show knew about challah. Then last year, rainbow-bagel and babka challenges did not delve into the Jewish significance of the bakes.

This time, the show did spend time there. After judge Prue Leith wonders whether the topping will be too sweet against the pavlova, Krauss explains charoset’s symbolism.

“It’s the mortar used by the Jews to stick the pyramids and Pharoah’s cities together,” he says.

“It is, it is,” Krauss answers with a laugh.

“Mazel tov,” Lucas tells him before moving on to the next baker — one who channeled the colors and flavors of Easter.