Colin Powell, who brokered the Middle East ‘road map’ to peace, dies at 84 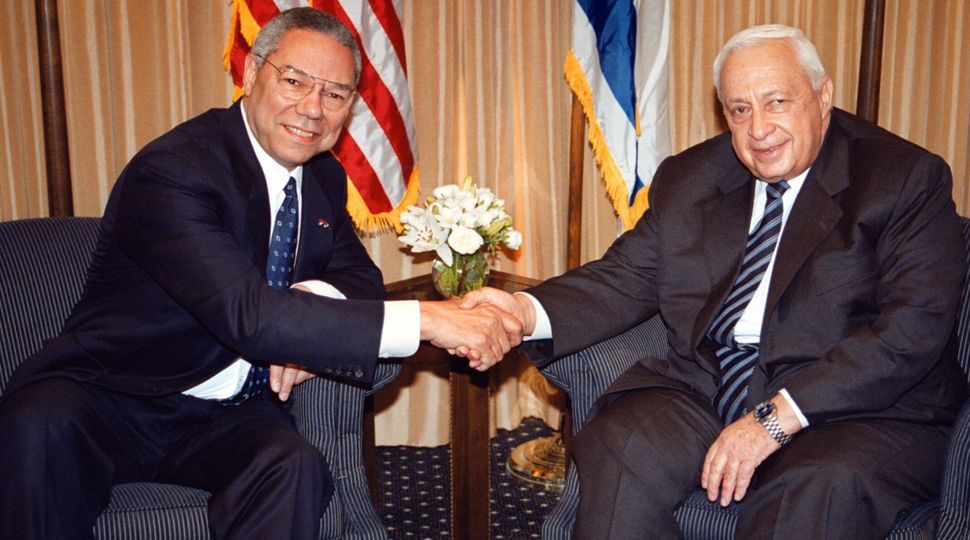 He was also the first military chief to speak Yiddish as a second language, and he loved surprising Jews with his skill.

Powell, the former U.S. secretary of state who brokered the “road map” to a two-state peace deal that still informs much of U.S. policy in the region, died Monday aged 84. He died of COVID-19, his family said on Facebook. He was fully vaccinated and, according to news reports, had been undergoing treatments for blood cancer.

Powell made history three times as the first Black man in a senior security position: As President Ronald Reagan’s last national security adviser from 1987 to 1989; as the chairman of the Joint Chiefs of Staff from 1989 to 1993 under President George H.W. Bush, who commanded the successful first Gulf War; and as secretary of state from 2001 to 2005 under Bush’s son, President George W. Bush, from 2001 to 2005.

Powell, the child of Jamaican immigrants who grew up in the Bronx, was a hero in Vietnam who upon his return stayed in the military and rapidly rose through the ranks.

From when he was 13 until his sophomore year at the City College of New York, Powell worked for Sickser’s, a Jewish-owned shop in the Bronx that sold goods to new parents — many of them Jewish who spoke Yiddish as a first language. He also worked as a “Shabbes goy,” turning on the electricity for Orthodox families on the Sabbath, and picked up the language.

When he met Yitzhak Shamir, the Israeli prime minister ahead of the first Gulf War in 1991, he said, “Men kent reden Yiddish,” we can speak in Yiddish, to Shamir’s surprise. At least twice, addressing the American Israel Public Affairs Committee, he joked about his Yiddish skills.

Shamir and Powell shared more than a language: In Powell, Shamir found the only senior national security official who was sympathetic to Israel’s reluctance to hold fire in the face of Iraqi Scud missile attacks on the country. The senior Bush and Brent Scowcroft, his national security adviser, were baffled that Israel did not want to rely on American protection.

Powell, as a military officer, understood Shamir’s concern that staying out would lower Israel’s deterrence, and his sympathetic ear helped bring Shamir around toward complying with the Bush administration’s demand that Israel lay low throughout the conflict.

Shamir was consistently concerned about Jewish sensibilities; heading a volunteerism initiative under President Bill Clinton, he formally apologized to the Jewish community after the commission’s first summit was held on Passover.

The pro-Israel community, mindful of his history, welcomed his ascension to secretary of state under the younger Bush, a development that accelerated talk that Powell would eventually run for president as a Republican.

There were tensions, however, as Powell at times clashed with the government of Israeli Prime Minister Ariel Sharon over Israel’s actions during the Second Intifada.

Sharon was signing onto the very thing he had accused his Labor Party opponents of rushing toward barely a decade earlier, when the Oslo Process, which did not explicitly envision Palestinian statehood, was launched under Clinton. Powell worked hard to bring the U.S. pro-Jewish community on board with the road map, mindful of how opposition among U.S. pro-Israel groups had helped frustrate the Oslo process.

The Trump administration suspended some provisions of the road map, deemphasizing statehood as an outcome for Palestinians. The Biden administration has reinstated its parameters.

Powell wanted a second term as secretary of state; he forever regretted becoming the leading pitch man for the Iraq War ahead of its 2003 launch, notably with a speech to the United Nations that was later revealed to have included distortions, and wanted to stick around to clean up the mess. Powell clashed with Vice President Dick Cheney over how the war developed.

Bush, however, chose in his second term to let Powell go and elevated his national security adviser, Condoleezza Rice, to the job, making her the first Black woman to be secretary of state. Once again the pro-Israel community, noting Rice’s reputation for hawkishness, rejoiced; once again, it was disappointed when she spearheaded pressure on Israel to enter the Annapolis peace process in 2007.

Powell, meantime, disillusioned with the course of the Bush presidency and resigned to the fact that his own presidential hopes were dashed in Iraq, endorsed Barack Obama for president in 2008. He remained a critic of the rightward drift of his party, endorsing Obama again in 2012, and Hillary Clinton in 2016, although he disliked her; Donald Trump, he said then, was a “national disgrace.”

Colin Powell, who brokered the Middle East ‘road map’ to peace, dies at 84