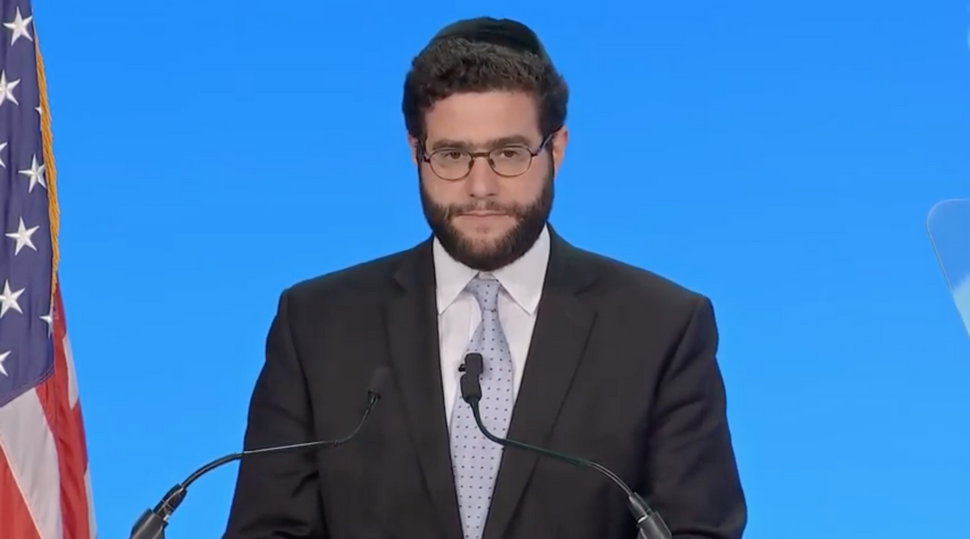 Rabbi Benjamin Goldschmidt, 34, had been working for Park East Synagogue for a decade. (Screenshot from YouTube)

Rabbi Benjamin Goldschmidt, 34, had been working for the synagogue for a decade and was known for his outreach to Russian-speaking families. He began at Park East as a rabbinic intern and congregants told the Jewish Telegraphic Agency that many hoped he would lead the synagogue one day.

But his tenure there abruptly ended with an email from Senior Rabbi Arthur Schneier that went out to community members on Monday. Schneier wrote, “Assistant Rabbi Benjamin Goldschmidt is no longer employed by our Synagogue,” but did not elaborate on the decision.

The firing is making waves in the venerable 133-year-old congregation, which is linked to a day school named for Schneier. More than 200 people have signed a petition protesting Goldschmidt’s termination, but their identities have been hidden after a note said the first 70 signatories “were receiving harassment for speaking up.” The synagogue claims a membership of 700 households.

Neither the synagogue nor Goldschmidt responded to requests for comment. Goldschmidt’s biography on the synagogue website, which was active as of the beginning of the week, has been deleted.

Reached by phone Wednesday, the synagogue board president, Herman Hochberg, told the Jewish Telegraphic Agency that he was not at liberty to discuss why Goldschmidt was fired, but said it was not “because we don’t like him.”

Goldschmidt is the son of Moscow Chief Rabbi Pinchas Goldschmidt and has written in a number of publications about his work as well as Israeli politics. His 2014 wedding to the journalist Avital Chizhik-Goldschmidt was the subject of a feature in the New York Times’ “Vows” section.

“As congregants, we are concerned about the state of our beloved synagogue and what the future holds,” it said. “Our overall synagogue attendance has declined; while Shabbat services used to bring in several hundred worshippers, now they bring in far smaller numbers, with few younger individuals and families (unless there is a special event).”

The email announced that the signatories would form a committee to work with Schneier, Goldschmidt and the Park East leadership on how “to revitalize the synagogue.”

In his own email, sent two weeks later, Schneier inveighed against that email and another, sent to the synagogue’s affiliated day school, which he said were “not authorized by me.” He defended his record at length, and then, without any segue, announced Goldschmidt’s termination.

“When I became the Rabbi of our beloved congregation, there was a single building and approximately forty members,” he wrote. “Under my leadership, and with the help of the wonderful team around me, we have grown by leaps and bounds to become a vibrant center for Jewish life in New York City.”

According to the petition launched Oct. 19, signatories “were shocked and disheartened” by the decision.

The organizer of the petition did not respond to a request for comment, but a string of comments below the petition express outrage at Goldschmidt’s firing.

“I’m devastated by this shocking and uncalled for news,” wrote Aliza Licht, the former president of the parents association at Rabbi Arthur Schneier Park East Day School. “Rabbi Goldschmidt and Avital are nothing but bright lights and beacons of all that is good in this world. They have our full support and deep appreciation for all they have done and will continue to do.”