Inspired by a 2011 movie, Ukrainian researchers have found the sewer where dozens of Jews escaped the Nazis 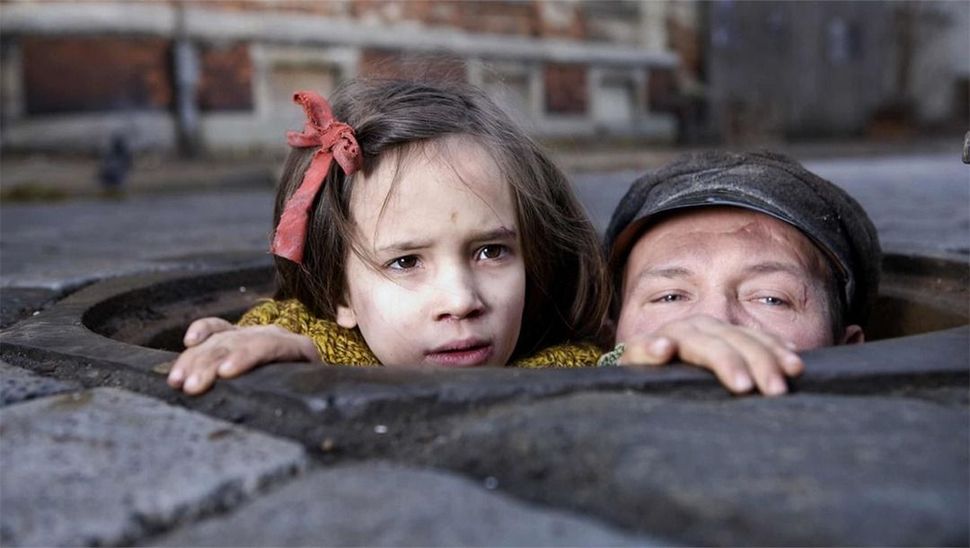 Actors Milla Bankowicz and Robert Wieckiewicz portray members of the Chiger family trying to survive the Holocaust during filming in Lviv, Ukraine in 2011. (Courtesy of Sony Pictures Classics)

(JTA) — The dozens of Jews who escaped the Nazis by hiding in the sewers of Lviv became local and international lore almost immediately after World War II.

“In the summer, when the rain seeped in, there was a lot of water everywhere,” Krystyna Chiger recalled in testimony in 1947, when she was 11. “Then we had to lean very low on the stones right next to the wall so that the water would not flow on us.”

But the location of the underground hideouts remained unknown until recently, when a team of archaeologists who had been inspired by a 2011 Polish movie about the saga discovered a secret chamber where at least 20 Jews lived — and many others died — in awful conditions while the Nazis and their collaborators roamed overhead.

In a medieval chamber under Cathedral Square, researchers found not only a space that could house a large number of people but relics of the time spent there, including beer bottles from the time of the Nazi occupation and a toy likely provided by one of the locals who helped the Jews hide.

The discovery of the hideout last month followed a painstaking sweep of the sewer system by researchers from Lviv University, who used the testimony of the Chigers and other survivors, according to the Ukrainian news site Zaxid.

The researchers had practical questions: They wanted to learn how exactly at least 21 people managed to live for months on end in a disease-infested and damp environment. But they also wanted to document the full scope of a story that has become world-famous because it shows the survivors’ inspiring determination to live.

The team began exploring the sewer system after seeing “In Darkness,” an award-winning Polish historical drama about the survival in Lviv’s sewers that was Poland’s 2012 Academy Awards submission.

The film captured the researchers’ imagination, but Hanna-Melania Tychka, one of the archaeologists, said the focus on the survivors’ emotions left her with questions about how they actually survived. “It was all quite surreal,” she said.

Andriy Ryshtun, a seasoned digger who is very familiar with the Lviv sewer system, also had doubts about what he saw in the movie.

“There are almost no places where people can stay for a long time. Water is flowing everywhere,” he told Zaxid. Researchers had ventured into the sewer several times over the years to try and corroborate the testimonies of survivors, but found nowhere they felt could match the space described by the Jews who hid there.

Progressing from manholes they knew Jews used to get into the system, they methodically mapped the labyrinth for over a year, starting in 2019.

Eventually, they arrived at a rainwater depository. “The entrance to the left and right was walled up with blocks, so the chamber remained isolated. We finally found the annex,” Ryshtun told the news site.

The annex is a rare remnant from medieval times that had been walled off and forgotten about for centuries.. “It could accommodate many people,” Ryshtun said. “And we found clear evidence that people were hiding there from the Nazis.”

Between the cracks in the stones that make up the annex, glass had been stuffed to keep out the rats, the researchers said. There were beer bottles from the time of the Nazi occupation, and a torch and nails had been driven into the stones to allow objects to hang away from the dank floor.

Evidence of heavy digging was also found: The occupants moved tons of earth to conceal the annex in case the Germans, who were digging trenches nearby, entered the tunnels of the sewage system.

There was also an object that probably belonged to the sewer workers – Poles, as Lviv was a Polish city when the Germans invaded it – who led about 70 Jews into the sewer system and fed them there. Only 20 survived the war. The remaining 50 either died of diseases in the sewer system or were caught by the Germans and murdered after deciding to take their chances in the outside world. According to one testimony, one baby was suffocated in the sewer by his mother for fear that the baby’s crying would cause the whole group to be discovered.

One of the rescuers had brought to the tunnels a statuette of an Easter lamb – an object connected to the Catholic tradition – for the children to play with.

It was a distraction from a dreadful reality, according to Krystyna Chiger and other survivors who testified about life in the sewer.

“It was very wet and dark. I was very scared and I was shaking, but I tried to be calm and only asked Daddy if we still had far to go,” she said in the 1947 testimony. “There were stones with yellow worms crawling all over. We put all our things over the stones and sat on top of them. It was awful there. Water seeped from the walls and it smelled bad. I saw large, red rats which ran by us just like chickens. At first I was very afraid, but later I got used to it.”

The objects retrieved by the researchers will go on display at Museum in the Footsteps of Galician Jews at the All-Ukrainian Jewish Charitable Foundation, which is exploring the possibility of opening the newly-discovered annex to visitors as part of a historical tour.

Olga Lidovska, a representative of the Jewish community in Lviv and the museum’s director, told Zaxid that she was moved by the discovery.

“The researchers have done the incredible, and indeed such discoveries rarely occur these days,” she said. “But they worked in difficult conditions and closed the case, bringing a very valuable discovery.”

—
The post Inspired by a 2011 movie, Ukrainian researchers have found the Lviv sewer where dozens of Jews escaped the Nazis appeared first on Jewish Telegraphic Agency.

Inspired by a 2011 movie, Ukrainian researchers have found the sewer where dozens of Jews escaped the Nazis