Joyce Newmark, a New Jersey rabbi who won on ‘Jeopardy!’, dies at 73 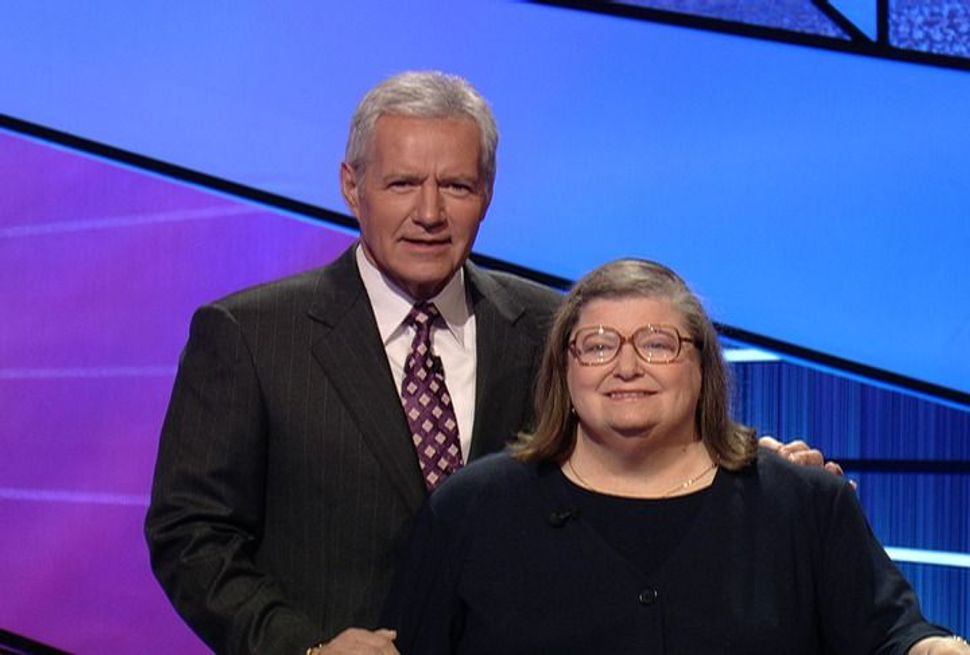 Rabbi Joyce Newmark, shown with “Jeopardy!” host Alex Trebek, won $29,200 and the championship in her first appearance on the game show, which aired May 16, 2011. (Courtesy of Jeopardy Productions, Inc.)

(JTA) — One of the happiest nights I ever spent in synagogue was May 16, 2011, when my fellow congregants and I gathered to watch that night’s episode of “Jeopardy!”

One of our members, Rabbi Joyce Newmark, was a contestant, but of course she hadn’t been able to tell us the results of a game taped months before. She sat stone-faced as her televised self ripped through category after category and nailed the Final Jeopardy! question: “What is liberal arts?”

When it sunk in that she had won the game – and $29,200 – the social hall erupted. Koufax pitches no-hitter! Mark Spitz swims to seven gold medals! Rabbi Newmark wins on “Jeopardy!”

The victory was especially sweet if you knew Joyce: She could come off as forbidding, especially if you couldn’t keep up with her knowledge of Torah, science fiction and current events. She lived alone and suffered from various ailments. But those who got to know her appreciated her sharp mind and keen wit, which she showed off when she chatted with Alex Trebek.

Trebek noted that she was appearing on the show 20 years to the day after her ordination at the Jewish Theological Seminary, and asked her a question about being a female rabbi. Joyce replied, “In an interview I was asked by the search committee, ‘What’s it like to be a female rabbi?” I said, ‘I don’t know. I’ve never been any other kind.’” Trebek deemed that a “good answer.”

Joyce moved into the assisted living facility in her 60s, a few decades younger than the average resident. It was a compromise to her health and finances: She had last held a pulpit job in 2005, at Congregation Sons of Israel in Leonia, New Jersey, and was on a fixed income. She kept busy editing papers and books for scholarly friends, taking part in a regular rabbis’ study class, and reading the novels (mysteries and thrillers, it always surprised me to learn) that she brought home by the armload from the public library.

My mother-in-law was living at the same facility, and whenever I’d visit I’d see Joyce, usually with a book in her lap. She turned her apartment into a sort of rabbinic cockpit: a desk and computer dominated the living room, surrounded by her sifrei Torah, her holy books. She wrote sharp and often funny commentaries on the weekly Torah portion, many of which I published when I edited the New Jersey Jewish News. The guest sermons she delivered from our synagogue pulpit were always the highlight of a Shabbat morning service.

I considered Joyce a “kiddush” friend, the kind you run into once a week after services and chat up over kugel and tuna fish. I always enjoyed our conversations, so long as we steered clear of politics (we didn’t agree on much). She’d reminisce about her career before she became a rabbi (she spent more than 15 years in management consulting and banking). She share a little Torah, often quoting herself — which I, a habitual self-quoter, found endearing. And, in the last few years, she’d report on how my mother-in-law was doing, especially when she suspected Mom was having a bad week.

Joyce reveled in her attention as a “Jeopardy!” winner and the flurry of media attention that followed. She would spin tales of the process, from auditions to taping to the community of former players who met and chatted online. She was part of an elite club, and knew it, and nobody could begrudge her.

When Alex Trebek died last year, I spoke to Joyce about what he meant to her. “He was the kind of person who competes on ‘Jeopardy!’” she told me. “He loved odd facts and read books and appreciated ‘knowledge lishma’ [for its own sake]. He just loved learning.”

I am pretty sure she was also describing herself.

—
The post Joyce Newmark, a New Jersey rabbi who won on ‘Jeopardy!’, dies at 73 appeared first on Jewish Telegraphic Agency.

Joyce Newmark, a New Jersey rabbi who won on ‘Jeopardy!’, dies at 73