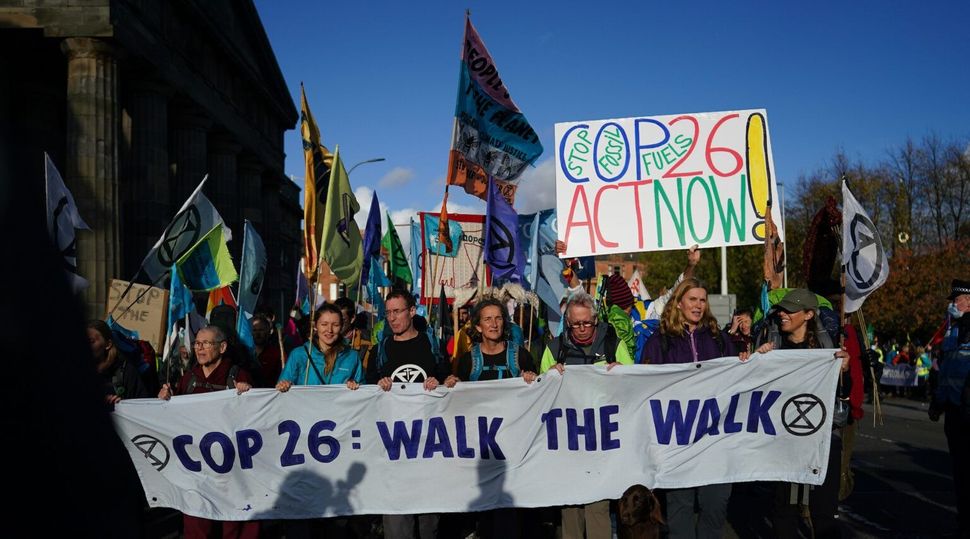 (JTA) — Rabbis in the United States and in Israel called on the leaders of their countries to take the issue of climate change seriously ahead of a gathering of world leaders to address the issue.

A group of major Israeli Orthodox rabbis, largely from the Modern Orthodox community, wrote a letter calling on Bennet to treat climate change as a matter of the utmost importance in a letter Friday. They called climate change  a matter of worldwide “pikuach nefesh,” invoking the Jewish legal term for the requirement to preserve life, a requirement which overrules nearly all other commandments in Jewish law.

“This issue today touches the preservation of life worldwide, in the full meaning of the words,” the letter states.

The letter was signed by a group of 20 influential rabbis in the Modern Orthodox community in Israel, including Rabbi Yuval Sherlow, Rabbi David Stav, and Rabbi Shlomo Aviner, according to Israeli news site Makor Rishon.

A separate call to action was made last week by a group of American rabbis and other religious leaders in the form of a prayer, modeled on the traveler’s prayer, for Biden.

The prayer, composed by Rabbi Daniel Swartz, who serves as executive director of the Coalition on the Environment and Jewish Life, reads in part: “Through your blessing, may the President lead the world to take the swift, ambitious actions needed to protect this common home, Your Earth, so that future generations inherit a just, sustainable, and bountiful world.  May generosity triumph over greed, and may all the leaders gathered at COP26 stand in solidarity with the poor and vulnerable.”

The prayer was delivered to the White House and signed by a number of well-known American rabbis, including Rabbi Jacob Blumenthal, head of the Rabbinical Assembly; Rabbi Sharon Brous, rabbi of IKAR in Los Angeles, Rabbi Arthur Waskow, founder of the Shalom Center, and Rabbi Rachel Kahn-Troster, vice president of the Interfaith Center on Corporate Responsibility, who was arrested last week at a climate protest in New York City.