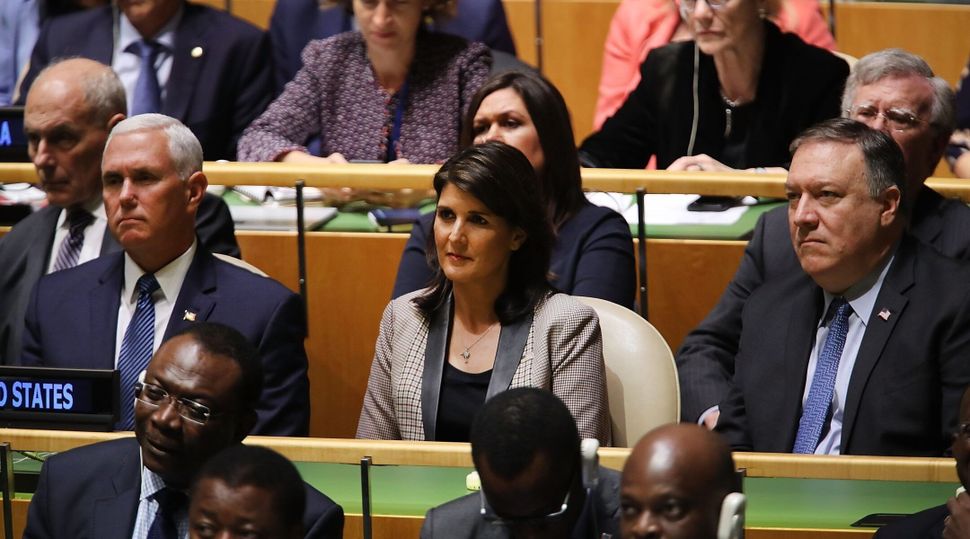 (JTA) — The Republican Jewish Coalition’s 2020 conference was one of the last Jewish conferences to be canceled as the pandemic set in: The group had gone so far as to order branded hand sanitizer.

Now, it’s one of the first to resume, and it’s doing so amid a great deal of change relevant to the group’s agenda. There was the election of President Joe Biden last fall and the tumultuous transition as Donald Trump exited the White House while remaining a looming figure in the Republican Party.

Then there was the death, in January, of Sheldon Adelson, the casino magnate who was a major funder of Republicans and of pro-Israel causes, whose Las Vegas properties have long hosted the RJC convention.

And then, this week, there was the strong — and, to many, surprising — showing by Republican candidates across the country in local and statewide elections. Glenn Youngkin, a Republican businessman, pulled off an upset win in the race for Virginia governor, and a Republican nearly ousted New Jersey’s Democratic governor, Phil Murphy.

“Registration is definitely getting a pop now as a result,” Brooks told the Jewish Telegraphic Agency. He expected more than 700 people to be in attendance, half the number of previous years, but unexpectedly high given the reluctance to travel while the coronavirus pandemic and some of its restrictions are still in place.

It’s not just the fact of Youngkin winning, but how he won that’s intriguing Republicans: Youngkin embraced some of Trump’s policies and rhetoric, particularly related to education, but kept the former president at a distance, refusing to allow him to campaign for him in the state. (Trump spoke by phone to two rallies.)

“I think you’re going to see a lot of candidates look to the Youngkin model, not just in avoiding Trump, but in messaging that brings voters back home,” Brooks said.

A lot of those would-be messengers are angling now for the 2024 presidential nomination, and plenty of them will be there — including, via video, Trump himself, who has had an at-times uneasy relationship with the RJC.

With the exceptions perhaps of DeSantis and Pompeo, each of these figures has had fraught relationships with Trump; Haley distanced herself from Trump after the Jan. 6 insurrection at the Capitol, only to try to walk back her dissent as Trump survived his second impeachment and maintained his grip on the party. Pence was loyal to Trump until he would not accede to the former president’s pleadings to overturn the results of the 2020 presidential elections.

Not coincidentally, the RJC has deep and uncomplicated relationships with old-school Republicans like Haley and Pence, who favor robust American internationalism. The group’s relationship with Trump, by contrast, is quite complicated: It praised him effusively for policies that aligned U.S. policy with Israel’s right-wing, including recognizing Jerusalem and the Golan Heights as Israeli territory and pulling out of the Iran deal, but was unsettled his flirtations with the far right.

The group also remains a space for the Trump-skeptical; Rep. Nancy Mace, a Republican from South Carolina who is a robust Trump critic, will be speaking.

Brooks said the conference would offer a masterclass in how to win back Congress next year, taking its cue from Youngkin, who focused on parents’ anger at closed schools and at exaggerated and often false claims that schools were incorporating radical teachings on race in their curricula.

“Americans care about jobs, America’s weakness after Afghanistan, COVID, they want to be involved in their children’s education,” he said. “Education is a critical hot-button issue in the Jewish community.”

The conference will take place as it has in past years at the Venetian resort, part of Adelson’s casino empire. His widow, Miri Adelson, is still deeply involved in political giving, and Brooks said she would speak at a tribute to Sheldon Adelson on Saturday night.

“The Adelson legacy is one of the most important in the history of the Jewish people,” he said. “Miri and Sheldon were a team and that will continue forward.”

—
The post A host of 2024 hopefuls — including Donald Trump, via video — will feature at Republican Jewish Coalition conference appeared first on Jewish Telegraphic Agency.