In speech to Jewish group, NY Gov. Kathy Hochul calls out Democrats who are ‘questioning our commitment to Israel’ 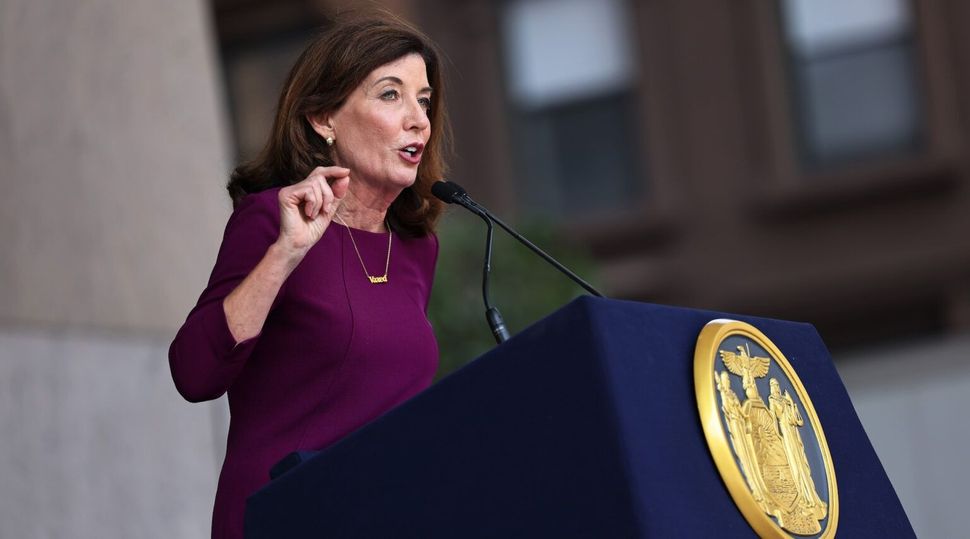 (JTA) — (New York Jewish Week via JTA) — In what was billed as her first speech to a Jewish audience as New York’s governor, Kathy Hochul vowed to fight hate crimes and criticized fellow Democrats over their positions on Israel.

The speech, delivered virtually to the Jewish Community Relations Council of New York on Wednesday night, hit the usual notes sounded by Hochul’s predecessor, Andrew Cuomo, who resigned in August in the face of sexual misconduct allegations. Hochul pledged to fight antisemitism and help bolster security at Jewish institutions.

Responding to a question at the end of her appearance, the governor also declared her support for Israel and called out those in her own party who disagree.

“As a member of Congress a decade ago, I stood firm with Israel when they were under assault,” she said. “And even more recently, as a Democrat, now, I reject the individuals in my party who are making this an issue and questioning our commitment to Israel.”

Progressives led by New York Representative Alexandria Ocasio-Cortez and other members of “the Squad” have challenged their party on issues like defense assistance for Israel.

Hochul noted that she was delivering the speech on the anniversary of Kristallnacht, the 1938 Nazi pogrom seen as the beginning of the Holocaust, and drew a connection to present-day antisemitism. She promised that she was “working very hard to make sure that the resources are there from the state government to fund security programs.”

“For so long the community has been under assault, and we talked about the rise in hate crimes against individuals who should never have that fear in their hearts,” she said. “You’ve always fought back. The Jewish people always had to fight back but it makes them stronger and more united together.”

Hochul made a few references to Jewish texts. She quoted the famous line from Ethics of Our Fathers, a rabbinic text, that says, “It is not your duty to finish the work, but neither are you at liberty to neglect it.” Later in her speech, she alluded to the Biblical verse, “Am I my brother’s keeper?”

Near the end of her speech, Hochul said that earlier in the year, she had planned to visit Israel over Thanksgiving with her family, but that in August “my life changed rather dramatically” — a reference to her becoming governor upon Cuomo’s resignation.

“Let’s let me get through this year, and I’ll be there next year,” she said.

—
The post In speech to Jewish group, NY Gov. Kathy Hochul calls out Democrats who are ‘questioning our commitment to Israel’ appeared first on Jewish Telegraphic Agency.

In speech to Jewish group, NY Gov. Kathy Hochul calls out Democrats who are ‘questioning our commitment to Israel’