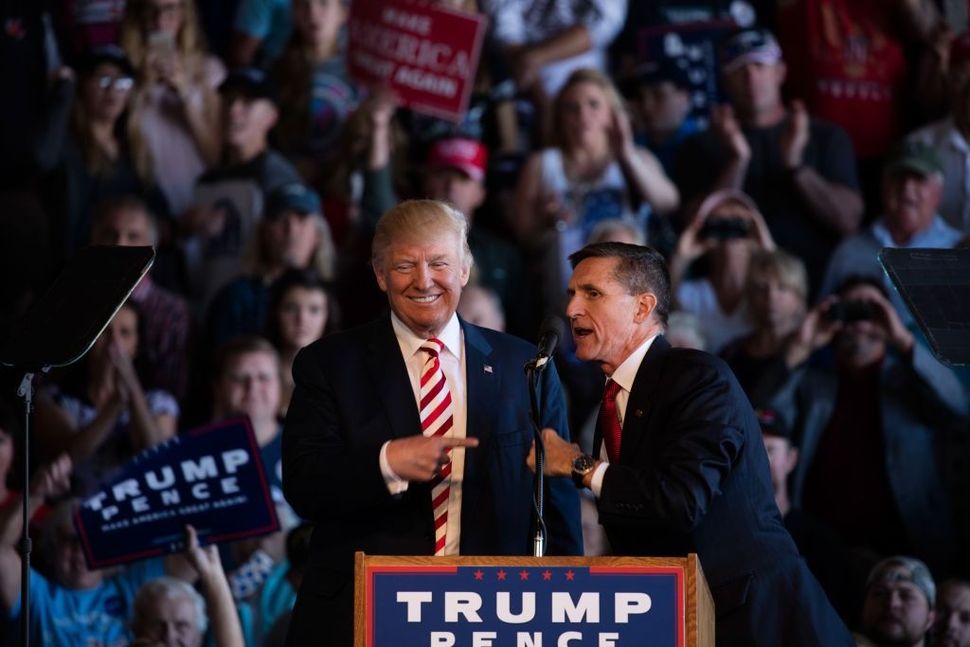 Speaking during an appearance at the ReAwaken America tour – which featured fringe conspiracy theorists like MyPillow CEO Mike Lindell, longtime Trump ally Roger Stone and pro-Trump attorney L. Lin Wood – the forcibly retired lieutenant general declared that, contrary to the First Amendment, which guarantees freedom of religion, “If we are going to have one nation under God, which we must, we have to have one religion. One nation under God, and one religion under God.”

His comments were almost immediately endorsed by hard-right Republican Senate candidate Josh Mandel, who tweeted “We stand with General Flynn” and “Freedom of religion ≠ freedom FROM religion,” on Saturday evening.

We stand with General Flynn.

Mandel, a grandson of Holocaust survivors running for Senate in Ohio, recently made waves when he claimed, without proof, that Jewish philanthropist George Soros helped mastermind both the COVID-19 pandemic and the racial justice protests across the United States last year.

His Twitter bio states that he is “Fighting to protect the Judeo-Christian bedrock of America.”

Candidate Mark Pukita, who is running against Mandel in the Republican primary, recently ran an ad explicitly singling out his opponent’s Jewish identity, asking “Are we seriously supposed to believe the most Christian-values Senate candidate is Jewish?”

According to Politico, when asked if he believed the ad was antisemitic, Pukita told a forum of voters that “In terms of antisemitism, all I did in an ad was point out that Josh is going around saying he’s got the Bible in one hand and the constitution in the other. But he’s Jewish. Everybody should know that though, right?”

Asked about being antisemitic, Ohio Senate candidate Mark Pukita just doubled down on putting out an ad reminding voters that Josh Mandel is Jewish. “He’s Jewish — everyone should know that.”

Flynn served as then-President Donald Trump’s first national security advisor in 2016 but was fired after only 24 days for lying to Vice President Mike Pence as controversy broke over the former general’s contacts with then-Russian Ambassador Sergei Kislyak.

He was later one of several former Trump aides to plead guilty or be convicted at trial in former Special Counsel Robert Mueller’s investigation into Moscow’s interference in the 2016 U.S. election to support Trump’s candidacy. He was pardoned by Trump in November 2020.

Flynn also served as head of the Pentagon’s Defense Intelligence Agency but was forced out in 2014 in part due to his management style and opinions on how to fight Islamist militancy.

He has a history of making controversial remarks and spreading conspiracy theories, having called for a military coup and saying that “they’re talking about putting the [COVID] vaccine into salad dressing.”

In a show dedicated to covid and election fraud conspiracies, Michael Flynn yesterday brings up an article he read that the Deep State medical establishment is planning to secretly put the covid vaccine in salad dressing. pic.twitter.com/45LniXtnYA

Flynn’s latest comments about religion come after some adherents of the Qanon conspiracy theory accused him of engaging in Satanism, a charge which he has denied.