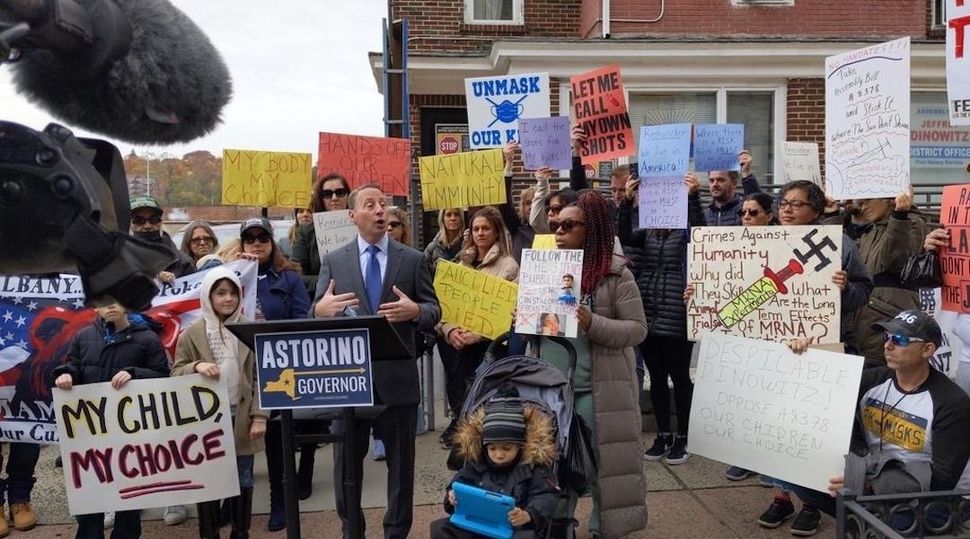 A protester, right, holds up a sign with a swastika during an anti-vaccine protest outside the Bronx office of Assemblyman Jeffrey Dinowitz, Nov. 14, 2021. Former Westchester County Executive and gubernatorial candidate Rob Astorino, at podium, spoke at the rally. (Courtesy Jeffrey Dinowitz, via Twitter)

(JTA) — (New York Jewish Week via JTA) — Analogies to the Holocaust have become commonplace at anti-vaccine protests around the U.S. and the world.

But protesters displaying swastikas and a yellow star especially stung on Sunday, when they deployed the symbols outside the office of a Jewish politician, Bronx Assemblyman Jeffrey Dinowitz, whose district includes the heavily Jewish neighborhood of Riverdale. The crowd, including a Republican candidate for governor, was demonstrating against vaccine mandates in New York.

According to photos tweeted by Dinowitz, one woman held up a sign with a swastika that read with phrases that included “crimes against humanity” and “Nuremberg code” — both references to Nazi Germany. Another protester wore a yellow star, an allusion to those worn by Jews under Nazi coercion.

“The display of swastikas and yellow Stars of David outside my office today is repugnant and offensive,” Dinowitz tweeted Sunday. “People are perfectly free to express their opinion on vaccines or any issue, but to openly display Nazi symbols outside the office of a Jewish legislator is despicable.”

Like other anti-vaccine protesters, members of the crowd on Sunday sought to equate the genocide of six million Jews with COVID-19 vaccine requirements. Protesters opposing public health measures have made such analogies throughout the pandemic, and antisemitism watchdogs, scholars and Jewish groups have roundly condemned the comparisons as offensive trivializations of the Holocaust.

Rob Astorino, a Republican gubernatorial candidate, spoke at the rally, just feet away from the protester with the swastika signs.  He wrote on Twitter Sunday night that he hadn’t seen them.

“I had no idea until I saw this photo,” wrote Astorino, a former Westchester county executive.

In an interview with the Forward on Monday, Astorino claimed the woman was an unidentified individual who switched to the swastika poster after she greeted him holding a completely different sign under her arm, calling it “a mystery.”

“This is really an unfortunate incident that happened,” he said. “I have condemned it, I have always condemned antisemitism.”

Astorino, who was the Republican nominee for New York governor in 2014, said nobody from his team was on the site to alert him in real-time about the matter, but for a couple of campaign volunteers. “I would have stopped speaking had I noticed it,” he said. “I don’t need that crap at my events or press conferences.”

He blamed the Democrats for exploiting this story for political reasons. “What the left is trying to do, that anyone who opposes a mandate is a racist or antisemite is completely wrong,” he said. “There are a few bad apples on all sides, who should be called out for what they are. But that is not the vast majority of Republicans or Democrats.”

“These blatant displays of antisemitic hate are disgusting, and I stand with @JeffreyDinowitz in rejecting this shameful, unacceptable behavior to the Jewish community,” she tweeted.

—
The post Anti-vaxxers protest with swastikas and yellow star outside Jewish politician’s office in the Bronx appeared first on Jewish Telegraphic Agency.