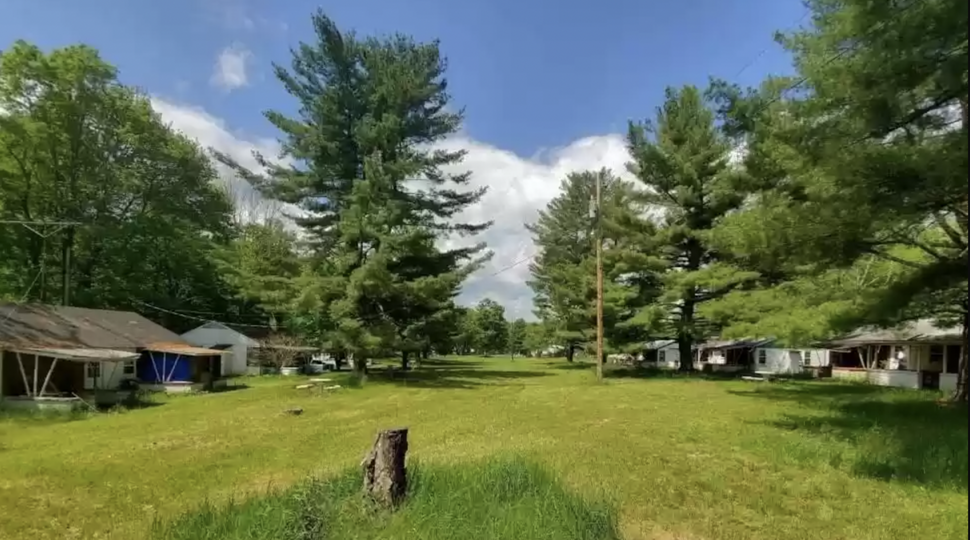 A bungalow colony in the Catskills is on the market for $795,000 in Kerhonkson, New York. (Catskills Region MLS)

According to the Catskills Institute at Northeastern University, “by the 1950s a half-million people each year inhabited the ‘summer world’ of bungalow colonies, summer camps and small hotels.”

And now, a little piece of Catskills history is up for grabs: A bungalow colony in Ulster County is currently on the market for $795,000. The property is located the hamlet of Kerhonkson, about 100 miles north of New York City.

Known as Kalaka Village, the 77-acre property features an assortment of small cabins, totaling 10 bedrooms and 10 bathrooms. Communal amenities include an in-ground pool, tennis courts and a hiking trail. However, the cabins and the amenities require some serious work: According to Realtor.com, the cabins are “ramshackle” and “the pool appears drained and tired, and the tennis courts will need to be cleared of vegetation.”

So who is buying up the Catskills’ former bungalow colonies? In recent years, summering in the bungalow colonies has become a “mostly Orthodox ritual,” as The Jewish Week reported last year, with Hasidic and yeshivish Jews spending their summers away from Brooklyn or New York City’s northern suburbs. Young folks, including non-Orthodox Jewish families, have bought bungalows as second homes or as year-round getaways.

Still, for the right buyer, the bungalow colony is an opportunity to revive, if just a tiny bit, the heyday of the Borscht Belt era, when families (read: mothers and children) would spend their summers in “the mountains,” fathers might visit only on weekends, legendary Jewish comedians like Mel Brooks and Joan Rivers would perform, and everyone would enjoy a good game of “Simon Says.“

—
The post Buy this Catskills bungalow colony and own a piece of the Borscht Belt appeared first on Jewish Telegraphic Agency.