‘Say cheese’: Israeli soldiers woke up Palestinian minors and photographed them in middle of the night 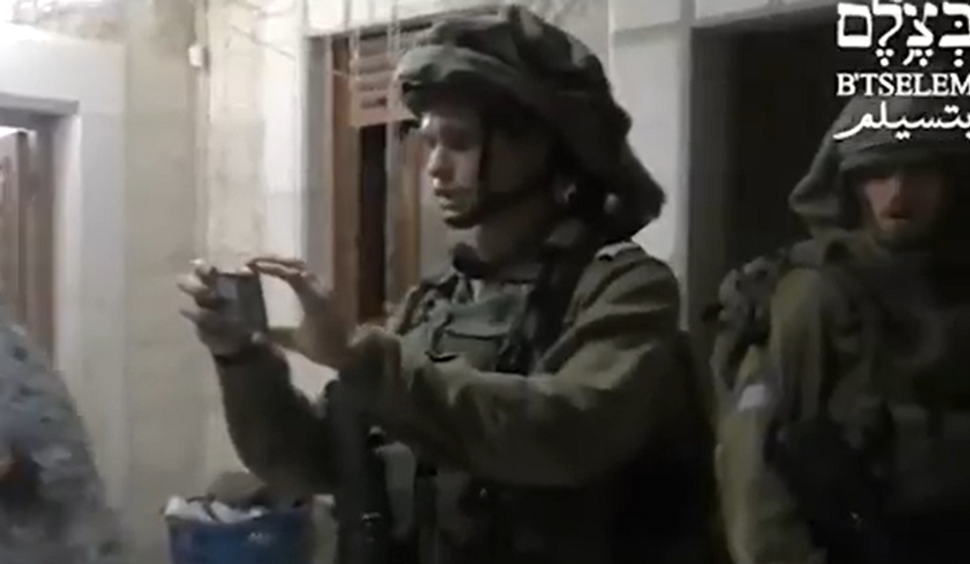 A screenshot from B’Tselem’s video.

Israeli soldiers pulled Palestinian children out of their beds in the middle of the night and photographed them illegally in the West Bank city of Hebron, a B’Tselem video shows.

During night operations in the area of Hebron under Palestinian control, known as H1, Israeli soldiers entered the home of the Dana family, forcing the parents to wake up and gather their children. The soldiers were filmed by an activist of the B’Tselem organization. According to the daily Yedioth Ahronoth newspaper, the incident took place in September.

The parents, calming their children, obeyed all the soldiers’ orders. The 13 minors, all of whom were in kindergarten and early years of elementary school, were forced to stand outside in a line. Several of the children were trembling and crying.

The strongest army in the Middle East as always said, #Israeli soldiers Storme a home in #Hebron in the #West_Bank and WAKE UP more than 12 children in the middle of the nights to take photos for them and ask them to smile. Video by Btselem pic.twitter.com/71eUvC7xt9

Before photographing the minors, an Israeli officer is heard in the B’Tselem footage claiming the children were being recorded because of a stone throwing incident, though he gave no details of which child was suspected of doing so.

According to Yedioth Ahronoth, Israel’s army said that the officer’s conduct was “improper,” including his “comment at the incident.”

“The officer was reprimanded over his conduct, and procedures will be sharpened among the forces to prevent the recurrence of similar incidents,” the army said.

The army also brought up a stone throwing incident, arguing the officer’s actions were intended to help identify Palestinian suspects who threw stones toward Kiryat Arba, an Israeli settlement on the outskirts of Hebron. It is illegal for Israeli soldiers to photograph minors.

The B’Tselem organization said that the footage illustrates “how arbitrarily the routine of the lives of Palestinians living under occupation is disrupted, and how easily soldiers violate their rights.”

“It seems that for the army, all Palestinians, including boys and girls of elementary school age, are potential criminals – they are allowed to wake them up at any time at night, enter their house and conduct a line-up.”

In June, the commander of the Israeli military’s Central Command, Maj. Gen. Tamir Yadai, ordered that the army cease intelligence-collecting raids on Palestinian homes in the West Bank, save for exceptional circumstances.

The process of “intelligence mapping,” as it is known in IDF terminology, involves Israeli soldiers entering the homes of Palestinians each night who are not suspected of any offenses, in order to register the home’s occupants and describe the building.

Human rights groups have levied heavy criticism against these raids for years. In a report published last November by the rights groups Yesh Din, Breaking the Silence and Physicians for Human Rights, they decried raids on Palestinian homes in general and “intelligence mapping” in particular.

As part of the report, they interviewed Palestinians, who described how nighttime raids impacted their lives and harmed their mental health. In addition to the practice of mapping, the report also focused on the army’s raids on homes to carry out arrests and the search and seizure of West Bank buildings for military purposes.

‘Say cheese’: Israeli soldiers woke up Palestinian minors and photographed them in middle of the night