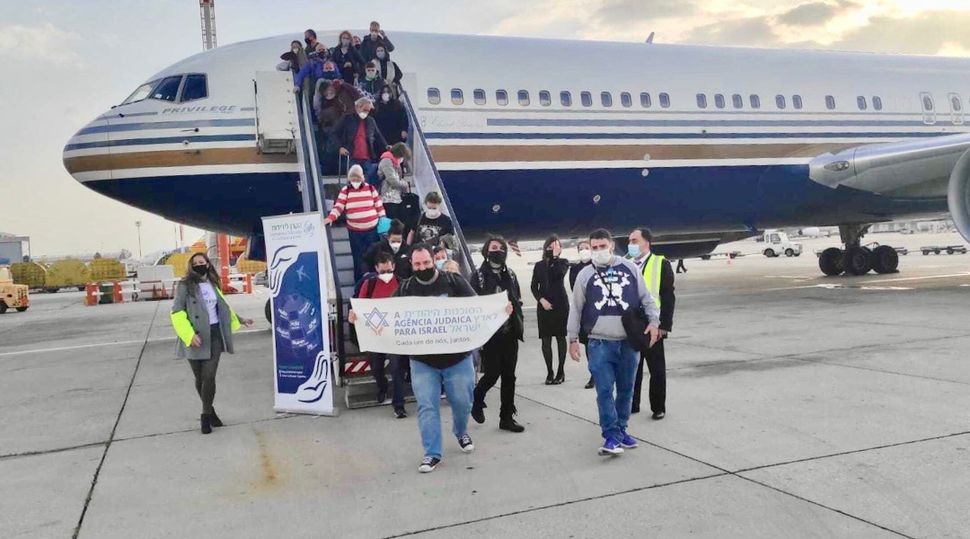 Jewish immigrants moving to Israel get off the plane at Ben Gurion Airport near Tel Aviv in 2020. (Jewish Agency for Israel)

(JTA) — In a survey among 1,054 Jewish community leaders in Europe, 23% said they were considering emigrating.

The survey, which the American Jewish Joint Distribution Committee, or JDC, published Thursday, did not ask respondents their reasons for contemplating emigrating.

Immigration by Jews to Israel, or aliyah, has increased dramatically in recent years from some European countries, including France, which has provided Israel more than 40,000 newcomers over the past decade. Aliyah from France peaked after 2012, when a jihadist murdered four Jews at a Jewish school in Toulouse. It surged again after a jihadist in 2015 killed another four Jews at a Paris kosher supermarket.

Of those Jewish community leaders who said they had contemplated leaving, roughly two thirds said they were planning to immigrate to Israel.

Other parts of the survey by JDC’s International Centre for Community Development suggested that respondents are increasingly afraid of antisemitism and attempts to limit freedom of worship on the continent.

The survey reflects sustained increase over the years in concern about antisemitism as a real threat for European Jews, “which leads to an erosion of respondents’ feeling of
safety in their cities,” the authors of a report based on the survey wrote.

The effects of the COVID-19 pandemic, which have hurt members’ income and communal cash makers such as museum, are also visible in the survey.

Poverty in the community, “though not one of the top threats, has grown steadily over the years, from 10% in 2008 to 35% in 2021,” the authors wrote. Some 37% of respondents marked financial hardship among members due to COVID-19 as a major threat to the community.

The key findings of the survey, titled “Fifth Survey of European Jewish Community Leaders and Professionals, 2021,” include:

• 28% of respondents expect antisemitism to rise significantly. In a similar survey conducted in 2011, only 10% gave this answer.

• 22% percent of respondents said they felt that they or their communities were unsafe. The figure was 12% a decade ago.

• Efforts to ban the slaughter of animals for meat without stunning — a key factor in European efforts to curtail kosher slaughter —  and non-medical male circumcision  emerged for the first time as one of the top three greatest threats facing Jewish communities. Among respondents younger than 40, 26% said this was a very serious threat, as did 66% of older respondents.

• Antisemitism was perceived the biggest threat (by 61% of the younger and  77% of the older cohorts) followed by demographic decline (52% and 67%).

• Support for Israel has grown among respondents over previous polls. For example, 66% agreed this year with the statement “I support Israel fully, regardless of how its government behaves.” The same statement had a support rating of only 48% in 2015 and 57% in 2011.