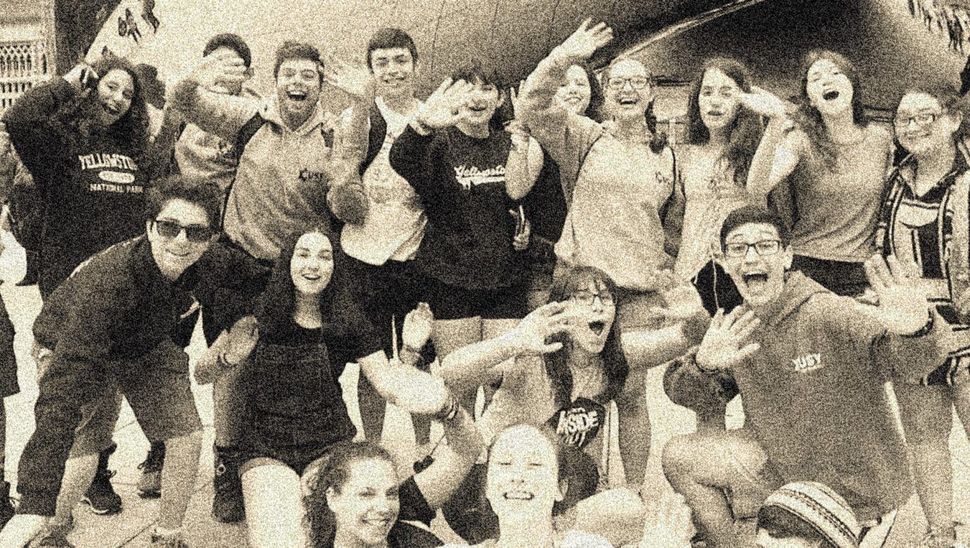 (JTA) — A massive survey conducted over the past year found that even as young Americans are rejecting traditional organized religion, they are still embracing faith and spirituality, broadly defined.

The pollsters behind the Spring Research Institute, a new nonprofit dedicated to research about the “inner and outer lives” of young people, say their poll, of more than 10,000 Americans between 13 and 25, is without recent precedent in its size and breadth. They also said Jewish respondents — 215 in total, a sample size they identified as statistically significant — appeared to be among those thriving the least in their religious and spiritual lives.

The Jewish results, shared exclusively with the Jewish Telegraphic Agency, confirm some elements of conventional wisdom about Gen Z Jews in America and challenge others. They also raise longstanding questions about whether Jews can effectively be studied the same way as people from other religious backgrounds.

It’s difficult to study how Jews compare to other religious groups because some individuals may identify as culturally, but not religiously, Jewish, according to Richard Flory, a sociologist serving as the executive director of the Center for Religion and Civic Culture at the University of Southern California.

The Springtide researchers opted to sort survey respondents into a wide range of categories: Jewish appears alongside other religious identities, as well as agnostic, atheist, “nothing in particular” and “something else.”

The respondents who identified themselves as Jewish stood out from their peers from other “major religious groups” — Protestant Christians, Catholics, Muslims, Buddhists and Hindus — in several ways, the Springtide poll found. Young Jews, more than members of any other group, said they were “not flourishing” in their relationships with friends, family, teachers, or other trusted adults. The same was true when asked about their physical health, mental health, social and online lives, and “faith lives.”

Young Jews also led the pack with the highest percentage rejecting the sentence, “In general, I feel very positive about myself.”

And some 40% of young American Jews said they do not need “a spiritual community,” the highest rate among major religions — a potential point of alarm for those who are hoping to increase young Jews’ engagement with synagogues and other Jewish institutions.

“This should be a call for greater urgency for those positioned to care for young Jews, including teachers, employers, coaches, and especially leaders of synagogues,” said Springtide CEO Josh Packard. “There is real need and opportunity to start leading with relationships to help young Jews flourish.”

But are Jews really so different from their counterparts in other religious groups? Springtide’s poll questions about “faith life” and “faith community” may not have captured the modes of religious engagement that are present for Gen-Z Jews, or their parents, said Ronit Stahl, a professor at UC Berkeley who studies recent history and is involved in the university’s Center for the Study of Religion and Center for Jewish Studies.

Surveys about Jewish engagement and attitudes more traditionally focus on measures that are less open to interpretation, such as synagogue affiliation and frequency of various practices. That is the case with the surveys conducted by the Pew Research Center, the latest of which focused on Jews was released earlier this year and also found evidence of declining institutional engagement among younger Jews. Pew conducts similar surveys of Christians, as well, and regularly releases surveys of attitudes across religious groups that are broadly trusted by American Jews.

Springtide is trying to do something different from what Pew does. According to Packard, Springtide is hoping to understand and support young people as they “explore life’s biggest questions” like “Why am I here? How should I live? What happens when I die?”

Founded in 2019, Springtide operates under the fiscal structure of a Catholic nonprofit publishing company called Lasallian Educational and Research Initiatives but the two entities are independent, with Springtide pledging to study young people from a nonsectarian perspective.

Packard acknowledged the difficulties in developing poll language about spirituality that can be universal but said the survey asked questions in multiple ways to capture different perspectives. He also noted that Springtide relies on an advisory board with representatives of many traditions including Judaism.

“Even with all of this in place, it’s tricky to try and find language and concepts that are accessible to young people broadly speaking,” Packard said. “Language that makes sense to young Muslims will not always resonate with Christians or Jews and the nearly 40% of young people who are unaffiliated might not understand much religious language at all.”

He said this team is open to adjusting its survey methods and added that, next year, Springtide hopes to carry out a national study focused entirely on young Jews.

If it does, other measures suggest that it might well draw some similar conclusions.

Flory, the University of Southern California sociologist, said Springtide’s findings match what’s already well known in his field. He was referring to the work of the National Study of Youth and Religion out of the University of Notre Dame and to his own book published last year, “Back-Pocket God: Religion and Spirituality in the Lives of Emerging Adults,” which is based on a decade of research.

“There’s no surprise in any of the data that younger people across the board are moving away from institutionalized religion,” Flory said. “I can tell you the groups that are not doing well: Jews, mainline Protestants and Catholics. They’re doing the worst.”

The suite of Jewish organizations seeking to engage Jewish teens and young adults is large and diverse, ranging from legacy institutions with a presence on college campuses like Hillel and Chabad, to the newer models like the fast-growing world of Moishe House with its global network of homes-as-community-centers, and startups such as GatherDC, which just got a $1.5 million grant to take its work on something called “relational Judaism” national.

Leaders of several Jewish organizations who reviewed the Springtide numbers said they weren’t sure how seriously they should treat the data, and expressed optimism on the outlook of engaging young Jews.

David Cygielman, the CEO of Moishe House, for example, saw a glass half-full when he read that 41% percent of Jews are not flourishing in their faith lives. It meant that 59% were.

“As we’re looking out into the future, and investing in this demographic, we’re not starting with a minority here, we’re starting with the majority that we want to see grow,” he said.

And from Chabad’s perspective, the numbers don’t exactly reflect the interest they are seeing at colleges.

“We’re seeing a surge of young Jews on campus clamoring for community, Jewish life and engagement,” said Rabbi Yossy Gordon, CEO of Chabad on Campus International. “They are looking for meaningful ways to build their own authentic Jewish identity.”

But some in the Jewish world said they found Springtide’s approach refreshing and thought the findings should be seen as relevant to American Jews. Josh Feigelson, a rabbi who leads the Institute for Jewish Spirituality, says the fact that poll language about faith and spirituality is seen as out of step with Jewish culture is in fact a problem for young Jews.

“For a lot of reasons the American Jewish community has shunned overt spiritual language,” Feigelson said. “We don’t talk about the presence of God in our lives or offer words of blessing to each other in a non-self conscious way. There’s a correlation there with a feeling of estrangement that doesn’t surprise me.”

A sociologist by training and consultant by profession, Tobin Belzer is one of the leading experts helping Jewish philanthropic funders decipher which youth efforts are worthwhile. Her research and evaluation of existing programs suggests young Jews aren’t hopelessly estranged.

“Young adults aren’t necessarily interested in rabbis who act like a ‘sage on the stage,’” she said. “They want someone who is real and approachable and authentic, who is going to have an actual relationship with them. Also, they’re not typically looking for the one community where they can engage fully, they are looking for a smattering of different options.”

—
The post National survey on youth and religion raises concern about Gen-Z Jews — and questions about how to understand them appeared first on Jewish Telegraphic Agency.