N.Y. Jewish leaders back Bowman on Israel amid pushback from the left 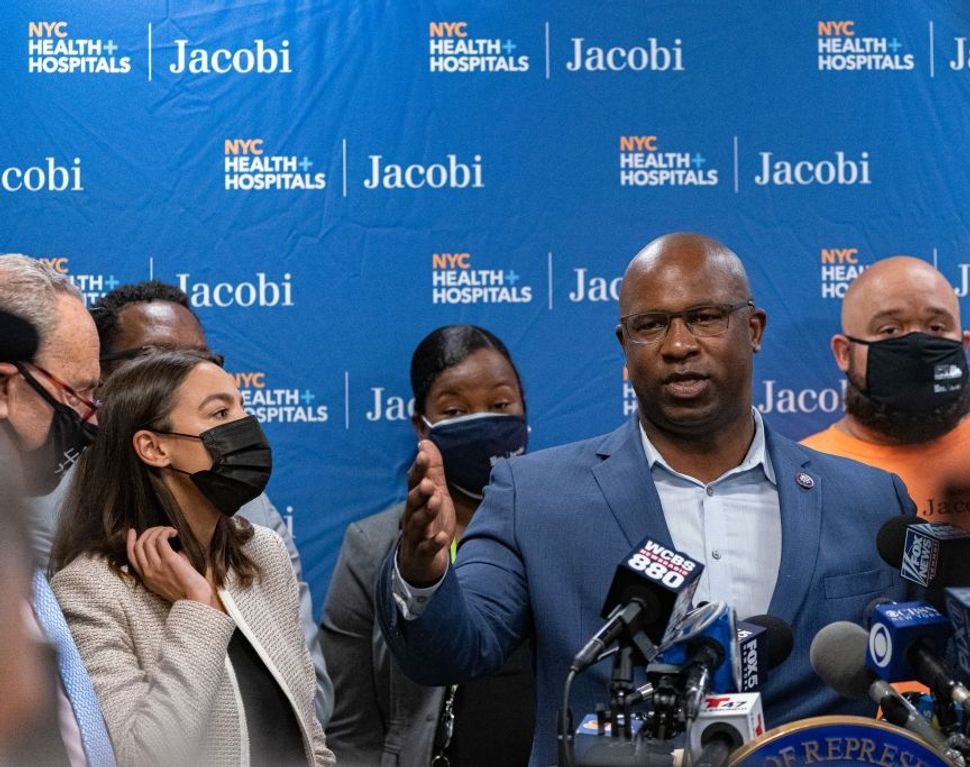 As the Democratic Socialists of America is urged to expel U.S. Rep. Jamaal Bowman over his recent visit to Israel, a diverse group of Jewish leaders in his district is applauding him for making the trip, which they called “politically courageous.”

The group of rabbis and activists from the Bronx and Westchester County planned to send a letter on Tuesday to Bowman, who was elected last year, commending his decision to join a congressional trip to Israel earlier this month amid fierce pushback from the far left.

“Some voices on the political extremes are speaking out loudly against direct, meaningful engagement with the conflict,” reads the letter, spearheaded by the New York Jewish Agenda, a liberal Jewish advocacy group launched last year. “But we know that an appreciation for nuance and complexity that comes with firsthand experience can effectively equip leaders with the knowledge and context to push back on the oversimplified narratives that dominate too much of the conversation around this issue.”

Last week, Bowman met with the socialist group’s national political committee to respond to the group’s public rebuke over the trip, which was sponsored by the liberal Zionist group J Street. The delegation of Democrats met with Israeli Prime Minister Naftali Bennett and Foreign Minister Yair Lapid, and toured Hebron, a Palestinian city in the Israeli-occupied West Bank.

Several local chapters of the D.S.A. haved called for Bowman’s ouster from the movement, while others recommended censuring him or committing to not endorse him for reelection in 2022.

Bowman defended his trip during a town hall meeting hosted by J Street U on Monday.

A national working group within the D.S.A. lamented Bowman for refusing to back the Boycott, Divestment and Sanctions movement against Israel.

“As we see the temperature rising once again on this issue, we hope that calmer and more reasonable voices will outweigh louder ones on both extremes,” the New York Jewish leaders say in the letter, a copy of which was obtained by the Forward. “We encourage you to maintain a commitment to rigorous analysis that incorporates a wide range of perspectives and constantly challenges you to stay true to your values.”

The letter was signed by Rabbi Jonathan Blake of the Westchester Reform Temple; Rabbi Howard Goldsmith of Congregation Emanu-El of Westchester; Rabbi Daniel Gropper of Community Synagogue of Rye; Rabbi Binyamin Krauss, principal of SAR Academy; Rabbi David Evan Markus of Temple Beth El of City Island; Stu Loeser, a Democratic campaign consultant and a Riverdale resident; Jessica Haller, a former city council candidate and executive director of 21 in ‘21; and Allison Fine, the past president of Temple Beth Abraham in Tarrytown, N.Y. and a former congressional candidate, as well as a group of activists affiliated with J Street.

Matt Nosanchuk, president and co-founder of the New York Jewish Agenda said the group was “not surprised” to see Bowman “face political blowback” but is “proud to support the community leaders across his district who prioritize meaningful engagement over political posturing, and real education over symbolic gestures.”

“We want every elected official in New York to know that if you are committed to representing your constituents instead of the loudest, most extreme voices,” he added, “and visiting Israel to listen to and learn from Israelis and Palestinians, we and the leaders in your community will have your back.”

letter to Rep. Bowman on Israel trip by Jacob Kornbluh on Scribd

N.Y. Jewish leaders back Bowman on Israel amid pushback from the left