Musicians, politicians and a ‘Housewives of New York’ star speak out against antisemitism at Times Square event 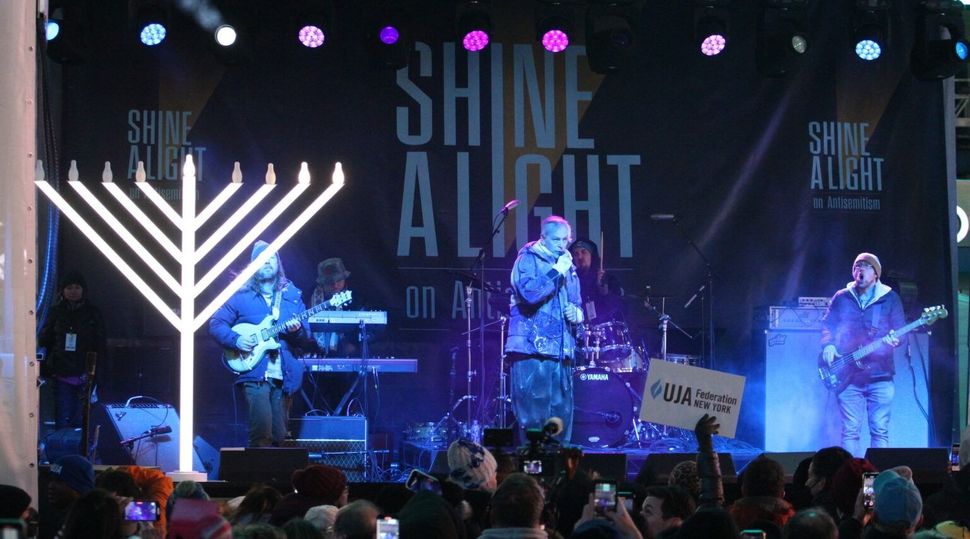 Matisyahu, the American Jewish reggae singer, closes out the Shine a Light on Antisemitism event in Times Square with a performance of his most popular songs, Nov. 29, 2021. (Courtesy JCRC-NY)

But it wasn’t just about feel-good holiday cheer: The event was part of the “Shine a Light on Antisemitism” campaign, which aims to raise awareness about antisemitism in order to encourage individuals and their communities to fight against it.

The campaign, which is sponsored by more than 60 North American organizations and corporations, both Jewish and non-Jewish, was formed by a coalition of major Jewish advocacy groups, including the Anti-Defamation League, the American Jewish Committee, the UJA-Federation of New York, the Jewish Federations of North America and the Jewish Community Relations Council of New York.

Israeli singer-songwriter David Broza performed “Yehieh Tov” (“It Will Be Better”) and the Jewish reggae crossover artist Matisyahu closed out the night with several of his biggest hits, including “One Day” and “Jerusalem.”

Williams, an African-American attorney, spoke of her personal relationship with the Jewish community, recalling a “Black Shabbat” dinner she hosted with Archie Gottesman, the co-founder of JewBelong.com, which aired on a “Real Housewives” episode earlier this year. She also mentioned the impact her visit to Yad Vashem, Israel’s Holocaust museum, had on her.

“I am deeply touched and inspired by the resilience, the beauty, the legacy, and the history of Jewish people,” Williams said.

The “Shine a Light” campaign kicked off across the country on the first night of Hanukkah — related events throughout the Festival of Lights include a National Menorah lighting in Washington, a virtual conversation today with Holocaust historian Deborah E. Lipstadt hosted by the NY-based Jewish Education Project, and interfaith celebrations in several cities.

The Shine a Light on Antisemitism campaign emerged as a response to perceptions of increased antisemitism in North America over the last few years. The campaign is targeting five areas — corporate culture, government policy, education, partnerships and media. The NBA, the NFL, NASCAR, American Eagle Outfitters Inc., Chelsea Football Club, iHeartMedia, YouTube and others have already partnered with organizers to call out antisemitism.

The campaign has two specific policy planks: urging corporations to include antisemitism education in their Diversity, Equity and Inclusion (DEI) intiatives, and getting state and local governments to officially adopt the International Holocaust Remembrance Alliance’s (IHRA) working definition of antisemitism. More than 28 countries — mostly in Europe — have adopted the definition, although some consider it controversial because it defines some types of criticism of Israel as antisemitic.

“The point of this is not victimhood,” said Anna Maisel, CEO of the California-based Kirsch Foundation, a major funder of the campaign. “It’s American Jews saying we have a problem, and a way to engage meaningfully across society. It’s not a headline, and it’s not a ‘gotcha.’”

In New York, a related social media campaign, spearheaded by JewBelong.com, will run on billboards, bus stops and taxis. On Monday night, a Times Square digital billboard flashed the message: “Be a mensch. Do what’s right. Shine a light during our plight,” among other messages highlighting antisemitism.

“It is not a Jewish issue, it’s an American issue, it’s a New York issue,” said Williams at the Times Square event.

In a speech, Hochul, who is seeking re-election after becoming governor following the resignation of Andrew Cuomo, said: “There has been oppression, hatred and antisemitism that has run rampant for far too long. I am here to say as the governor of the great state of New York, there is no hate in our state.”

Also speaking was Joey Borgen, a 29-year-old Jewish man who was assaulted earlier this year in Times Square on his way to a pro-Israel rally. “The attack on me unfortunately was not an isolated incident,” Borgen said. “Antisemitism is increasing to record levels around the United States.”

Anti-Jewish hate crimes dropped from 953 in 2019 to 676 in 2020, a decrease of 29%, according to the FBI, although anti-Jewish crimes again made up the majority of hate crimes based on religion in the bureau’s annual report. The ADL reported in April that the number of antisemitic assaults fell sharply in 2020 compared to 2019, although the number of reported antisemitic incidents barely decreased in the United States in 2020 from the year before, despite pandemic lockdowns.

“We’re here today, together with tens of thousands of people across the country to shine a light on antisemitism — the miracle light of Hanukkah,” Borgen continued, standing next to Holocaust survivors Jehuda and Lea Evron of Queens, New York. “The light that says Jews will not stand by and let this take place. The light that proclaims Jews will stand up strong, proud, and together as one.”

—
The post Musicians, politicians and a ‘Housewives of New York’ star speak out against antisemitism at Times Square event appeared first on Jewish Telegraphic Agency.

Musicians, politicians and a ‘Housewives of New York’ star speak out against antisemitism at Times Square event