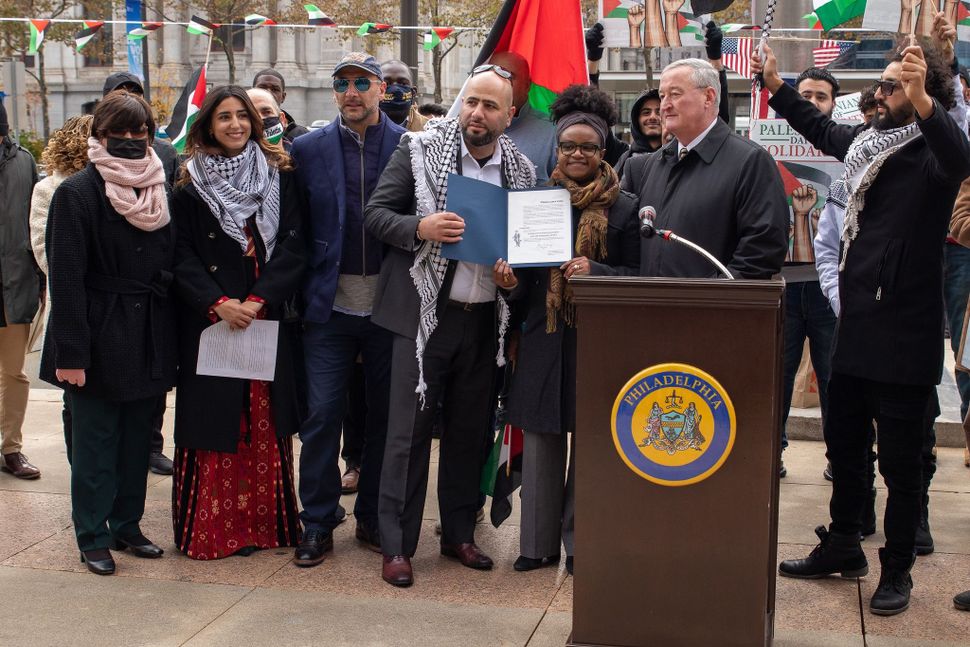 Philadelphia Mayor Jim Kenney at a rally marking a Day of Soldarity with the Palestinian People on Nov. 29, 2021 Image by Albert Lee/City of Philadelphia

A day after hosting a rally that marked the United Nations’ day of solidarity with Palestinians, an event at which organizers called for Palestinians’ right of return to Israel, Philadelphia Mayor Jim Kenney defended his participation in the event and, in an address to Jewish leaders, called out hate generally.

“When we see any form of hate or discrimination we must speak out and condemn it,” the mayor said in short remarks at an event hosted by major Jewish groups, part of a national initiative called ‘Shine a light on antisemitism.’

“It is up to us not to repeat the mistakes of the past,” he added. 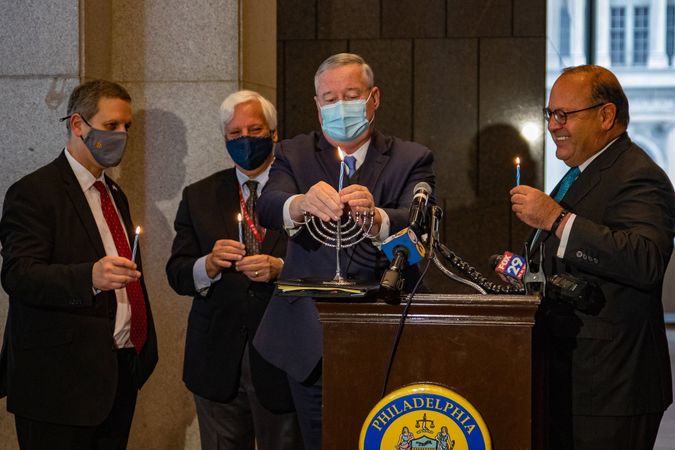 Philadelphia Mayor Jim Kenney at a ‘Shine a light on antisemitism’ event marking the holiday of Hanukkah at the Municipal Building on Nov. 30, 2021 Image by Albert Lee/City of Philadelphia

Kenney didn’t mention antisemitism in his one-minute speech, nor did he express support for Israel as the state of the Jewish people. During the Monday rally, held outside the municipal building, the mayor presented the organizers with a proclamation that recognized the UN’s international day of solidarity with Palestinians and their heritage.

Kenney defended his participation in the pro-Palestinian rally in a statement to the Forward on Tuesday. Philadelphia’s “Office of Immigrant Affairs (OIA) and the Office of City Representative (OCR) have been in discussions with representatives of the local Palestinian community to host an event that recognizes their contributions to the city and region,” he said. “The Palestinian Day of Solidarity resulted from those conversations and is not a statement on international affairs or the ongoing Israeli/Palestinian conflict.”

“I participated in the event as I have done for countless events recognizing our ethnically and religiously diverse communities,” the mayor added, pointing to the event he attended on antisemitism.

The international day of solidarity with the Palestinian people has been observed since 1978 and recognizes the Partition Plan adopted on November 29, 1947, which called for the establishment of separate independent states for Jews and Arabs in the land of Palestine, but was rejected by the Palestinians.

Israel has charged the U.N. with bias for calling for the right to return of displaced Palestinians to their homes in Israel while ignoring Jewish refugees who were expelled from Arab countries.

Asaf Zamir, Israel’s consul general in New York whose office also covers Pennsylvania, sent a letter to Kenney on Friday urging him to cancel his participation at the pro-Palestinian rally. “This event is not making a stand for the Palestinians,” Zamir wrote. “It instead seems to be endorsing the violent rejection of the peaceful compromise plan presented 74 years ago that could have avoided the decades of bloodshed that followed.”

The Israeli diplomat also said that the event, hosted by Philadelphia’s Office of Immigrant Affairs, was also sponsored by organizers who endorsed “questionable” tactics, including some that support the Boycott, Divestment, Sanctions movement.

The mayor’s office didn’t respond to Zamir’s letter ahead of time.