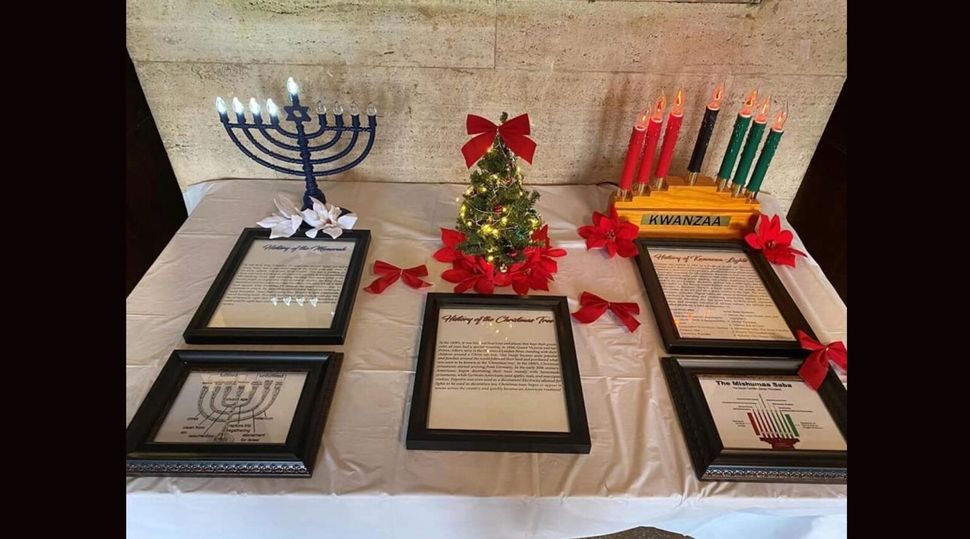 A picture of a menorah intended to explain the object’s symbolism was actually a Messianic image in which the menorah’s branches were described as symbolizing the “cross” and “resurrection.” (Screenshot from Facebook)

(JTA) — A small municipal holiday event turned into a big problem for Medford, Massachusetts, after a city worker included a menorah picture produced by Messianic Jews in a display about world religions.

The suburb of Boston apologized for the display, which appeared during last week’s Holiday Extravaganza, a city event aimed at promoting local businesses. But the episode has left some local Jewish residents asking, not for the first time, whether they are truly considered a part of the local community.

Medford, a city that is part of the dense core of Boston’s metropolitan area, is home to Tufts University and claims as native sons both the author of “Jingle Bells” and Mike Bloomberg, the former mayor of New York City whose family had to buy a home in the town surreptitiously to circumvent local antisemitism.

Some Medford Jews felt like important progress had been made this year after the city school district, for the first time in recent history, canceled classes for Rosh Hashanah and Yom Kippur.

Sarah Beardslee, a Jewish resident of Medford for 30 years, said the city had recently sought to demonstrate that it values diversity. “This is just another example of how that’s really not the case,” she told the Jewish Telegraphic Agency of the holiday display.

The issue began shortly after the Holiday Extravaganza on Wednesday evening, when the town posted pictures from the event. Along with photos with Santa, a wreath sale and the lighting of the town Christmas tree, the holiday event featured a table inside City Hall with framed descriptions of holiday symbols.

Although the table held an electric menorah with nine candles, the menorah in a photo placed on the table wasn’t the one used by Jews during Hanukkah. Instead, it was a picture of a seven-branched menorah labeled with Christian terms. One branch was labeled “cross,” for example, while another was labeled “resurrection.”

The image is widely available online as an illustration of Messianic interpretations of the menorah. Messianic Jews are people who follow many Jewish practices while believing in the divinity of Jesus; no mainstream Jewish movement considers them Jewish.

In Medford, some were concerned that a Messianic Jew was responsible for Jewish affairs within the municipal government, or that City Hall had reached out to a Messianic Jew for guidance instead of to representatives of the local Jewish community.

But according to a note posted in a local Facebook group by the City Hall staffer who said she had created the display, the image did not reflect an ideology at all. Instead, the staffer wrote, she had come across the image while researching about religious traditions and thought it might be helpful for people attending the event.

It quickly became clear to the city that that was not the case. Late Friday, it issued an apology on Facebook and the photo of the table with the menorah has since been removed from Facebook.

“We sincerely regret the harm and are committed to learn from this mistake,” the apology said. “Going forward we will consult faith and community leaders, include their experience and expertise in our event planning processes, and ensure that every public-facing item is represented appropriately and accurately.”

The apology followed a day of meetings and conversations, according to Rabbi Braham David, who leads Temple Shalom in Medford. He and the synagogue’s president sent statements to their community late Friday as Shabbat began.

David wrote that he had spent the day speaking with other local rabbis, Jewish community members and clergy from other religions. He also said he had reached out to Medford’s mayor, Breanna Lungo-Koehn, to discuss the situation.

Gisele Ellis, Temple Shalom’s president, said that she, too, was inclined to accept the city’s apology, citing the example of Julian Edelman, the star Jewish wide receiver for the New England Patriots who retired this year. Edelman prominently sought to teach, not shame, a colleague who made antisemitic comments on social media.

But Ellis also conveyed deep distress about the episode, which she said was a departure from past years when the city invited Temple Shalom to participate in planning the holiday event.

“That we have to explain why this is offensive is frustrating. The lack of Jewish involvement in this event makes us feel invisible in the eyes of our city leaders. That this horrible display was put up at City Hall makes us furious,” she wrote, adding, “I have heard this fury from many of you today.”

Among those responding was a newly elected member of the City Council, Kit Collins, who is Jewish.

“​​To all those who spoke up about the erroneous and offensive depiction of a menorah displayed at last night’s holiday festival at City Hall, I see you & I thank you. As a Jew, I understand how frustrating and painful it can be to have one’s faith be so egregiously misrepresented,” tweeted Collins, who will be sworn in next month.

“I’m grateful that the Administration responded swiftly to remove the offensive picture,” Collins added. “I’m sorry this happened, but I hope and expect that it will spur us to do better going forward at properly respecting, representing, and celebrating the many cultures that exist in Medford.”