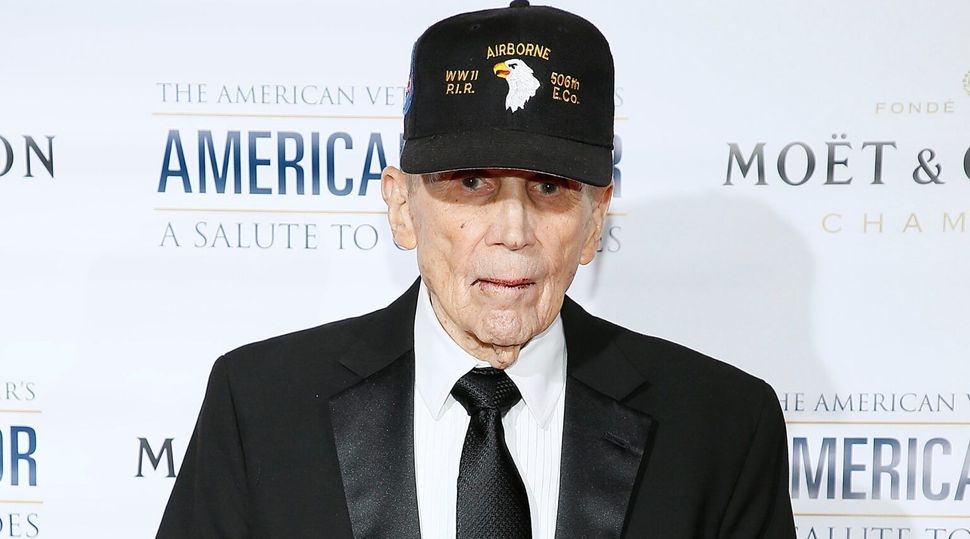 (JTA) –When Ed Shames described his Jewish self, he used the term “tough SOB.”

Shames, who died Dec. 3 at age 99 at his home in Norfolk, Virginia, in 1945 secured bottles of cognac designated for Hitler’s use only from the palace of the man who wanted to wipe the Jews from the earth. He waited until 1961 to open it: The occasion was a bar mitzvah — his son’s commitment to a Jewish future.

The exploits of Easy Company were immortalized in the 2001 HBO miniseries “Band of Brothers.”

In a 2015 interview with the Jewish News of Southeastern Virginia, Shames described how growing up Jewish on the Virginia coast shaped him.

“Things were tough at that time for Jewish boys,” he said. “There were times when you had to fight your way through. One thing people learned about me … they never called me ‘dirty Jew’ twice. I was a tough SOB; not mean, just tough.”

Being Jewish saw him through excruciating training, he said.

“Because I was a Jew, I didn’t want to wash out, and lots of guys did,” he recalled in the interview, conducted when he was 94. “Heck, they had 7,000 volunteers they had to whittle down to 2,500 soldiers. They wanted to discharge me after I hurt my knee on my first parachute jump. I wouldn’t let them. After walking 149 miles from our training base at Camp Toccoa to Ft. Benning in full gear over three and one-half days, there was no way.”

His determination to give antisemites no quarter carried over into his military service. He recalled organizing an outing to a Passover seder for Jewish troops while they were training in England ahead of D-Day.

“We had 18 men from the regiment sign up and this officer made a disparaging remark about Jews,” he said. “I could have received a general court-martial for what I told him.”

Easy Company saw some of the most consequential battles during World War II; Shames was at Normandy on D-Day and at the Battle of the Bulge, among other pivotal battles, the obituary posted on the funeral home’s website said. He was a noncommissioned officer who got his officer’s stripes on the battlefield. He retired as a colonel.

Shames was one of the first U.S. troops to enter the Dachau concentration camp but would not speak of the experience. About his prize of Hitler’s cognac, he was more voluble.

“When Germany surrendered, Ed and his men of Easy Company entered Hitler’s Eagle’s Nest where Ed managed to acquire a few bottles of cognac, a label indicating they were ‘or the Fuhrer’s use only’,” the obituary said. “Later, he would use the cognac to toast his oldest son’s bar mitzvah.”

Revenge served cold in a shot glass seemed worth it, although Shames said the bottle he opened at his son’s bar mitzvah was soon gone.

After the war, Shames worked for the National Security Agency. His wife Ida, whom he married at Temple Beth El in Norfolk, predeceased him after 73 years. She too was pretty good at keeping a secret.

“Before heading to England I visited her where she was working as a hospital volunteer,” he recalled. “She gave me a goodbye kiss on the cheek and that made an impression on me. At the time, Ida was engaged to a Naval officer from New York named Joseph. I got to her just in time after the war. You know, to this day, she won’t tell me his last name.”