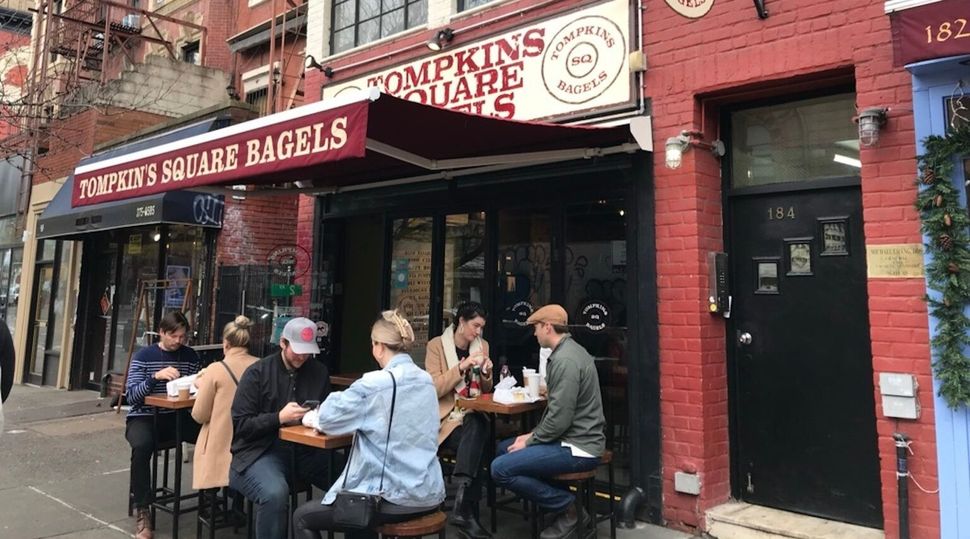 (JTA) — (New York Jewish Week via JTA) — Over the weekend, bagel lovers across the five boroughs (read: Jews and everyone else) were shaken to the core when the New York Times announced a cream cheese shortage in the city. It was news no one expected to hear, even in their most dystopian predictions about our pandemic-ravaged society.

A cream cheese shortage affecting bagel shops: so niche, yet so terrifying. The piece, by Ashley Wong, detailed a frightening shortage of cream cheese base that New York bagel sellers use to make their signature cream cheeses.

“Supply chain issues have plagued the United States for months, causing scarcities of everything from cars to running shoes,” the Times story reads. “Now, New York’s bagel purveyors are starting to feel the effects in a sudden and surprising development that has left them scrambling to find and hoard as much cream cheese as they can.”

Not surprisingly, Twitter was aflutter with commentary. One person called the news a “schmear campaign.”  Others were quick to shift blame, insisting that supply-chain issues notwithstanding, bagel shops brought this scourge upon themselves — New York City’s bagel places are notorious for spreading their schmear so thick that it’s a common practice to wipe off massive globs of cream cheese with a cheap paper napkin before taking a bite.

“Let’s be real: the cream cheese shortage is entirely self-inflicted from NYC bagel shops loading each bagel with a pound of cream cheese,” tweeted Jake Anbinder on Sunday.

So what, exactly, does a cream cheese shortage mean for those of us who consume bagels on the regular? Is this as bad as it sounds? And does this mean that bagel shops might actually give us less cream cheese with our orders (something that a cadre of New Yorkers seem to want)? At the New York Jewish Week, it was clear that it was time to investigate. So I headed to the East Village where I was able to hit up several bagel shops within a 10-block radius.

My first stop was Tal Bagels at 357 First Avenue. The workers behind the counter there had heard of the shortage, but they assured me they had enough cream cheese.

“It’s not going to affect your order,” they told me. “You’ll still see the same amount of cream cheese on your bagel.”

They insisted I shouldn’t worry so much — but that’s easier said than done. “There’s a cream cheese shortage?” the man in line next to me asked as a look of concern crossed his face. Clearly he had spent the weekend in a state of ignorant bliss.

“No, no, we’re OK!” the guys behind the counter reassured him.

At Bagel Boss, 263 First Avenue, no one in the store had heard of any cream cheese shortage. “It’s the same as always,” the man behind the counter told me. The only shortage he’d noticed, he added, was of coins, which has been going on since the beginning of the pandemic.

At Ess-A-Bagel, at 324 First Avenue, the staff there acknowledged the shortage, but said it wasn’t anything new.

“There have been shortages in everything since the pandemic started — cups, lids, napkins — it’s not particularly a cream cheese shortage that’s affecting us,” explained Beverly Wilpon, the store’s chief operating officer. “It’s something we’ve learned to accept. We have no choice.”

Tompkins Square Bagels, 184 Second Avenue, was the first place I visited that acknowledged the magnitude of the shortage.

“I’ve never seen anything like it in my 45 years in the industry,” Frank Russo, director of operations, told me. “We’re used to getting pallets of 50-pound packages, and for the last two weeks we’ve been getting it in 3-pound blocks.”

Still, Russo explained, the shortage is less of true scarcity and more about inconveniences (i.e., the labor involved in unwrapping 3-pound packages versus 50-pound packages). Sure enough, the store’s glass cases were filled with mounds of cream cheese in a variety of flavors, from scallion to peanut butter cookie dough.

It’s now a matter of finding new and farther-flung suppliers to acquire the 1,800 pounds of cream cheese needed to get through the week, Russo said, adding that the average bagel patron is unlikely to notice the cream cheese shortage in their day-to-day lives.

Russo also remarked upon the various supply-chain issues that Tompkins Square bagels has experienced — the only flavor of Snapple they’ve been able to carry, for example, is Raspberry Tea. As at Ess-A-Bagel, Wilpon also described a shortage of paper and plastic products such as napkins, lids and coffee cups.

The Times story detailed many bagel sellers’ scramble to source enough cream cheese. But perhaps there is another approach: As Brooklyn-based civil rights attorney Joel Wertheimer — a former White House staff secretary to President Obama — tweeted on Saturday, echoing Anbinder: “Have they considered not putting a pound on each bagel?”

“I love a good schmear but bagel places put enough cream cheese on a bagel that it overflows,” Wertheimer told me over Twitter DM. “It seems like they could cut down by like 25% and nobody would notice.”

I floated the idea of using less schmear at all the bagel stores I visited and was met with resounding pushback.

Wilpon at Ess-A-Bagel concurred. “We’d rather say we have no cream cheese left than give someone less of the product they’ve ordered,” she said.

“Absolutely not,” said the guys at Tal’s Bagels.

“I have very high standards of quality,” Russo said. “Part of that is getting the cream cheese-to-bagel ratio just right. I would never alter that.”