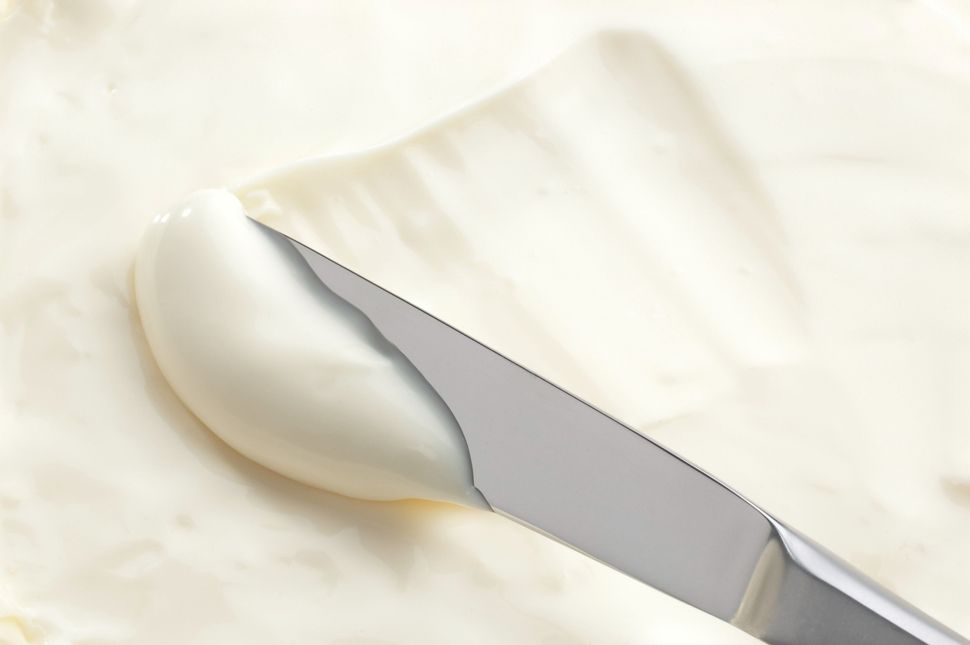 When it comes to “bagels and lox,” the cream cheese is essential but goes without mention. Like the marinara sauce in “spaghetti and meatballs,” it plays a leading role but gets no top billing. Still, a tart, bright red tomato sauce gets noticed. Cream cheese, however, inspires no secret nonna recipes. Even Jewish gourmands who demand the freshest of hand-rolled bagels and the most pristine razor slim Nova will settle for a generic schmear.

Recently, I got curious about the glob of Philadelphia on my New York bagel. Online, I discovered that the cream cheese is not an old-world Jewish creation but rather a modern product developed from previous recipes in the 1870s by an upstate New York gentile named William Lawrence. As for the “Philadelphia” branding, it was a marketing ploy by New York salesmen, taking advantage of Philly’s 19th-century reputation for artisanal cheeses.

The world’s pre-eminent cream cheese expert is Jeffrey Marx, rabbi emeritus of Santa Monica Synagogue, a reform temple. In 2017, Marx authored a chapter in the book “Tastes of Faith: Jewish Eating in the United States.” Aside from dispelling cream cheese misconceptions, he carefully laid out the myriad historical and technological factors that allowed the first Jew to bite into a bagel and lox in New York in the late 1920s.

According to Marx, the bagel arrived from Eastern Europe in the 1890s, but before it could be sliced and filled, its hole had to be narrowed and softened. In addition, Pacific Northwest fish magnates had to find a way to freight salmon across North America. Finally, Mr. Lawrence of Chester, New York, needed to master new mechanization technologies to create a high-fat content version of Neufchâtel cheese. By the 1920s, all these ingredients were widely available and marketed in New York City, where the large Eastern European Jewish community was waiting. 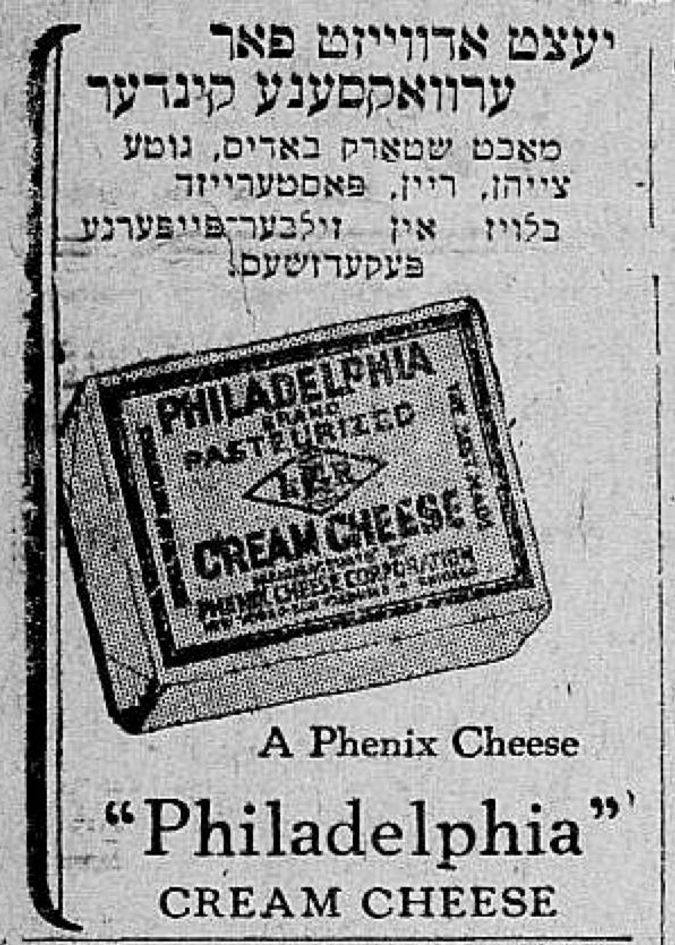 I’d Rather Be in Philadelphia: An ad for Philadelphia cream cheese in the Forward. Incidentally, there wasn’t much Philadelphian about cream cheese except the name, which was the brainchild of New York salespeople. By Forward Association

For centuries, European Jews had noshed on bagels and salted fish. They also arrived at Ellis Island as master schmearers, but of butter and schmaltz, not cream cheese. Still, Marx explains, bagels and lox was not a call back to the Old World. Instead, it was an announcement that American Jews had arrived. Lox was new to Jews and became an upscale substitute for the shtetl staple of herring. Cream cheese was relatively expensive and a product of New World mass production. “The combination arose to display the rising economic status and increased Americanization of the second-generation Jewish immigrants of New York,” the rabbi wrote.

The article put my brunch plans in a new perspective, and I had questions. When I wrote Marx, he suggested I read his two academic articles before we chatted. The first article dissects 150-year old ledgers and trade books to show how mechanization allowed for a mass-market high-fat content spreadable cheese. The second looks at packaging and marketing. A careful analysis of records firmly shows that Philadelphia may have a claim on cheesesteak but not on cream cheese.

The articles cover every aspect of cream cheese but raise new questions. What was a rabbi — even a sun-tanned Southern California reform rabbi — doing researching the modernization of the U.S. cheese industry? In his 2012 Food, Culture & Society journal article, the words “Jewish” or “bagel” do not even appear.

Talmudic study can be esoteric, and rabbinical students might dive into the nature of Babylonian contracts. Under the auspices of the Jewish principle of healing the world, a rabbi may stray from religious texts for a good cause. But did Rabbi Marx’s congregation know he spent years poring over the legal records of goyish 19th-century dairy farmers?

Food does have a special place in Judaism. We remember past afflictions by munching on matzo and express our future aspirations in terms of milk and honey. Rabbis even innovate recipes. The first-century sage Hillel mixed bitter maror and sweet charoset between matzo to symbolize the lessons of Exodus. The “Hillel sandwich” is still part of the Passover Seder ceremony. So why couldn’t a 21st-century rabbi find religious meaning in mixing salty lox and fatty cheese in a bagel? 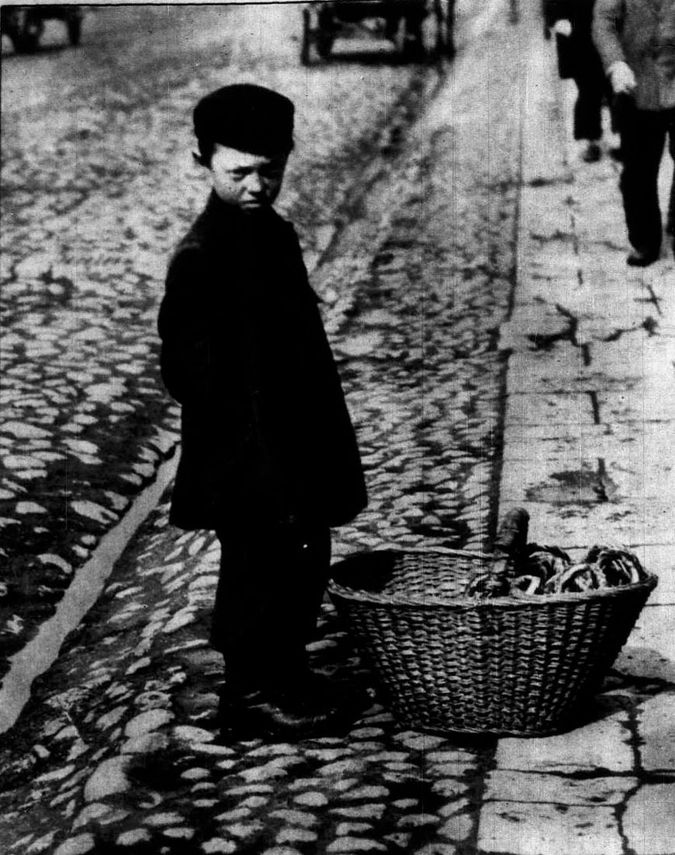 In Search of Schmear: A child bagel vendor from the Forward archives. By Forward Association

I asked Rabbi Marx over the phone if his research was religious in nature. “No,” he responded flatly.

“I come from the Breakstone family,” he explained. His relatives are the Lithuanian Jewish Breakstone brothers who started the dairy giant in 1897. He became interested in dairy while researching a family genealogy that became an 839-page book, which included the names of 31,000 relatives.

“A family member told me, ‘your cousins who started the dairy introduced cream cheese to America,’” he recalled. This inspired him to write the history of Breakstone’s. When he learned that his ancestors didn’t start cream cheese, he began to write the real history in a footnote. “Roughly eight to 10 years later, I finished the footnote.” 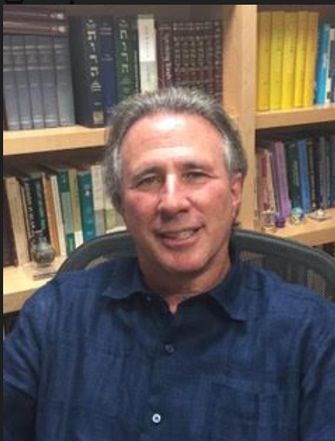 Marx, who retired in June at the age of 68, sees his research as part of his rabbinate. “For American Jews, the most important center of Judaism is America,” he said. For over three decades, the rabbi led adult education classes and delivered sermons connected to Jewish American history.

It’s not surprising that the story of cream cheese would inspire a reform rabbi. Reform Judaism is the movement most open to change and outside influences. Practices like the acceptance of female rabbis and tolerance of treyf are seen by some as corrupting Judaism. That cream cheese, something uncontroversially Jewish, is actually modern and non-Jewish, bolsters the argument that adopting outside customs does not water down the Jewish identity.

“Reform Judaism in America is absolutely an adaptation of American ways and practices,” Rabbi Marx told me. He compares the upscaling of the old-world bagel and herring to the loftier bagel and lox to American Jews embracing Santa-like Hanukkah gift-giving and lavish bar mitzvah receptions. Examples of how Jews “incorporated American materialist culture into already existent Jewish religious structures.”

Marx doesn’t believe these American innovations are a break with tradition. “The reason for Jewish survival over the centuries was our ability to interact with and adapt to the different cultures around us,” he said. Still, America has given Jews unique opportunities. In the past, Jews borrowed from their neighbors. But, American Jews go one step further. “We actually take Yankee cream cheese and make it Jewish,” Marx said.

“It’s the story of American Jewish resilience,” said Marx, starting to sound more like a rabbi than a food historian, “What we’ve done is acculturate to America. We’ve taken American products, the American World, American things and made them ours. And that’s the story of Jews in America.”