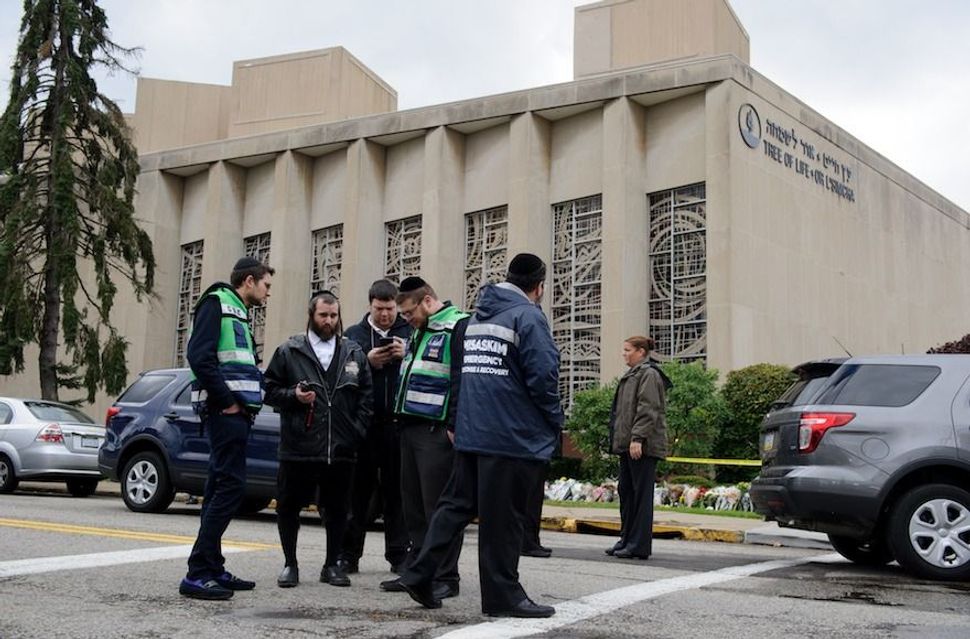 A Jewish emergency crew and police officers at the site of the mass shooting at the Tree Of Life synagogue in Pittsburgh, Oct. 28, 2018. (Jeff Swensen/Getty Images)

(JTA) — Pennsylvania will allocate $6.6 million in funding for the redevelopment of the Tree of Life synagogue campus where 11 people were killed in an antisemitic attack in 2018.

Speaking at a press conference outside the synagogue Monday, the last day of Hanukkah, Pennsylvania Gov. Tom Wolfe called the state’s contribution to the renovation “a Hanukkah present.”

“Tree of Life is undertaking a project to remember the past, to inform the present, and promote healing for the future,” Wolf said, according to the Pittsburgh Post-Gazette. “And I am so proud to support the communities’ efforts to reimagine this space, to create a welcoming place for residents, for visitors in Pittsburgh to reflect, and to learn, and to grow.”

Rabbi Jeffrey Myers, rabbi of the Tree of Life synagogue, also acknowledged the holiday in his remarks and with the menorah he presented to Wolfe as a gift.

“Hanukkah means rededication,” Rabbi Myers said. “And that is indeed the journey that we are on.”