Trump: Netanyahu was the first to congratulate Biden. ‘F—k him’ 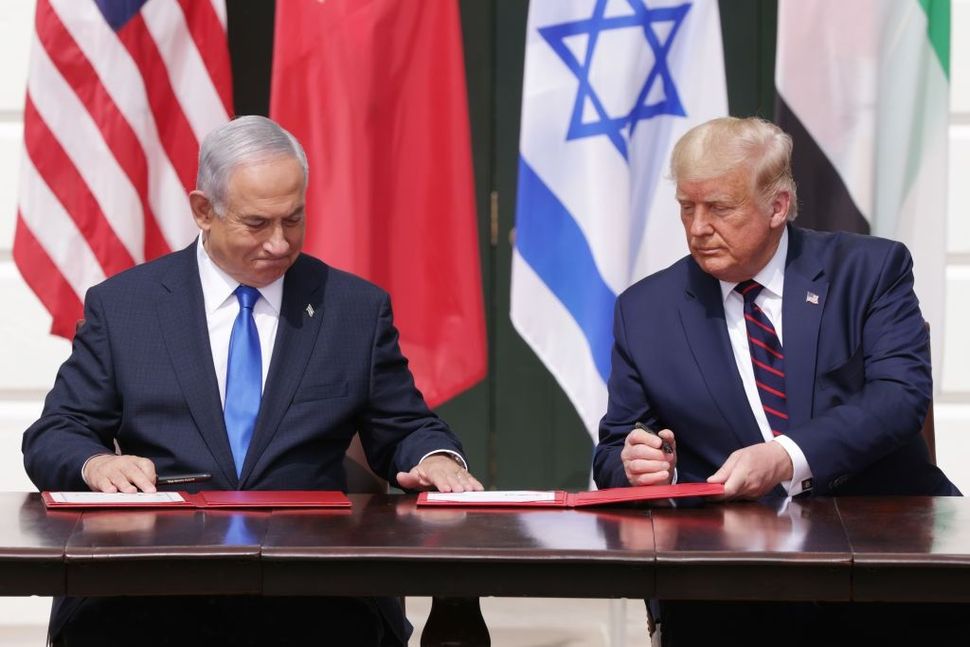 Benjamin Netanyahu and Donald Trump at the signing ceremony for the Abraham Accords in 2020.

This article originally appeared in Haaretz and was republished here with permission.

Former U.S. President Donald Trump has repeatedly criticized Benjamin Netanyahu over the Israeli leader’s congratulations to President Joe Biden after his election, according to an interview published Friday by the Hebrew daily Yedioth Ahronoth.

“The first person that congratulated [Biden] was Bibi Netanyahu,” Trump said referring to Netanyahu by his nickname. “The man that I did more for than any other person I dealt with” Trump told Israeli journalist Barak Ravid during an interview for his upcoming book “Trump’s Peace: The Abraham Accords and the reshaping of the Middle East.”

In contrast to Trump’s claim that Netanyahu was quick to congratulate Biden, Netanyahu was reportedly 12 hours late to join world leaders’ congratulations, and has even avoided referring to Biden as president-elect during a press conference in November 2020, saying instead that Biden was “supposed to be appointed the next president.”

“I liked Bibi. I still like Bibi. But I also like loyalty. The first person to congratulate Biden was Bibi. And not only did he congratulate him, he did it on tape,” Trump said adding that he was personally disappointed. “Bibi could have stayed quiet. He has made a terrible mistake.”

“I can tell you that people were very angry with him when he was the first one to congratulate Biden,” Trump said.

“I think Israel would’ve been destroyed maybe by now,” if he had not pulled out of the nuclear pact, Trump said.

During a phone call Trump had with Ravid in July, the former U.S. president dubbed the withdrawal from the nuclear deal as the most significant decision he had made.

Referring to the Abraham Accords, Trump said he believes they will be regarded “very positively”, as no one thought it was possible to get the United Arab Emirates, one of the region’s most powerful countries, to normalize ties with Israel.

Trump also cited actions he had taken to ensure Netanyahu’s political survival, such as his move to recognize the Golan Heights in 2019, and the Trump’s administration’s intention to move the U.S. embassy to from Tel Aviv to Jerusalem.

“[Netanyahu] would have lost the election if it wasn’t for me,” Trump said.

This article originally appeared in Haaretz and was republished here with permission.

Trump: Netanyahu was the first to congratulate Biden. ‘F—k him’