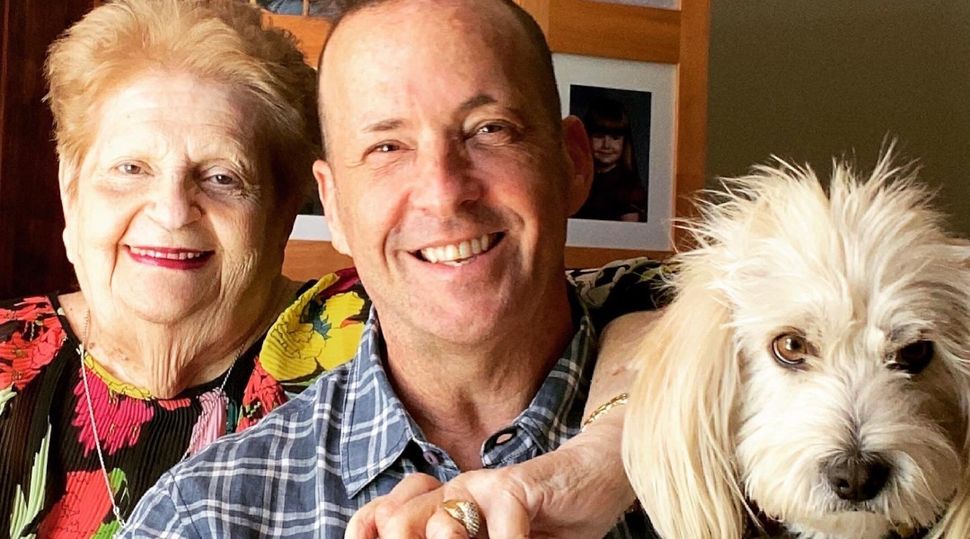 The late Renay Mandel Corren holds the hand of her son Andy, whose obituary for his mother went viral Wednesday night.

(JTA) — (New York Jewish Week via JTA) —  When Andy Corren’s mother, Renay Mandel Corren, died on Saturday in El Paso, Tex., at age 84, he did what many bereaved children with a creative bent would do: He wrote an obituary.

“A more disrespectful, trash-reading, talking and watching woman in NC, FL or TX was not to be found,” Corren wrote in the obituary that was published Wednesday in the Fayetteville Observer, the newspaper of the North Carolina city where Mandel Corren lived for many years. He honored his “plus-sized Jewish lady redneck” mother thusly: “Hers was an itinerant, much-lived life, a Yankee Florida liberal Jewish Tough Gal who bowled ’em in Japan, rolled ’em in North Carolina and was a singularly unique parent.”

The loving yet warts-and-all obituary of the “zaftig good-time gal” quickly went viral after crime writer Sarah Weinman tweeted it on Wednesday evening to her 380,000-plus followers. This was much to the surprise of Corren, who describes himself in the obituary as “her favorite son, the gay one who writes catty obituaries in his spare time, Andy Corren, of — obviously — New York City.”

“When it comes to writing, you meet people where they are,” Corren told the New York Jewish Week, of how his words captured his mother’s essence. “That was the crux of my mother’s genius, it was to just completely meet you where you live.”

In the obituary, Corren describes his mother, who was known as Rosie, as someone who “played cards like a shark, bowled and played cribbage like a pro, and laughed with the boys until the wee hours, long after the last pin dropped.”

She was also, at some point during the 1980s, according to the tribute, “the 11th or 12th-ranked woman in cribbage in America, and while that could be a lie, it sounds great in print.”

Corren, a talent manager and writer who splits his time between New York and Los Angeles, never expected the obituary to go viral. In hindsight, though, he said he understands why the piece touched so many — and that it’s a fitting coda to his mother’s legacy.

“This time of the year, with the pandemic, the government, and the environment, things are feeling really bad. It’s nice to laugh, too,” he said. “That was my mother’s specialty, laughing in the face of quite a bit of tragedy.”

Corren is one of Mandel Corren’s six children, and said he grew up in the ’70s and ’80s on a military base in Fayetteville. The family is “100% Jewish,” he said, although he stressed they were non-denominational and not particularly observant. Funds were often low; in the obituary, Corren mentions his mother’s poor credit rating, multiple bankruptcies — and, intriguingly, an alleged affair with Larry King in the 1960s.

“Obviously there are poor Jews,” Corren said. “People just aren’t used to hearing that side of the story.”

Corren’s grandparents on his mother’s side were Hungarian Jews who emigrated to the U.S. in the 1920s who settled in Miami, and his father’s parents were Brooklyn Jews, themselves the children of Jewish immigrants.

His maternal grandparents, Corren explained, were deeply religious. His mother, however, was less spiritually or religiously invested in Judaism as much as she was culturally — actually, make that culinarily — interested. He remembers how his grandparents would bring Jewish deli items with them whenever they visited from Miami, and Corren took up the tradition when he moved out of North Carolina.

“My mother never lived near a Jewish deli,” he explained, “so I was constantly traveling with oily meats and stinky tongue from Katz’s in my checked suitcase to bring back for her.”

“She was a Jew, and she was a proud Jew,” Corren told the Jewish Week. “It was a humongous part of her self-image and her projected one, which is that she was a Jewish girl through and through, from McKeesport [Penn., where she was born] and until the day she died in El Paso.”

For those interested in a “very disrespectful and totally non-denominational memorial,” Corren and his siblings are planning a party at B&B Lanes in Fayetteville on May 10, 2022. “Bowling parties were a feature of our life growing up,” he said. “My mom worked at the bowling alley and that is exactly how we’re going to send her off on her birthday.”

Corren’s tribute to his mother has now been shared tens of thousands of times. Some people online said they plan to attend the memorial; others offered compliments such as, “This brief, brilliant obituary is funnier and more moving than most of the novels I’ve read in my lifetime.”

Twitter can be a “deranged cesspool,” Corren admits, “but it’s also this magical, charmed place where the story of a heavyset matriarch of this dirtbag American family justifiably gets her praises sung for surviving, for thriving, and for raising kids.”

“Please think of the brightly-frocked, frivolous, funny and smart Jewish redhead who is about to grift you, tell you a filthy joke, and for Larry King’s sake: LAUGH,” the obituary concludes. “Bye, Mommy. We loved you to bits.”

—
The post We spoke to the son who wrote the viral obituary for his ‘plus-sized Jewish lady redneck’ mother appeared first on Jewish Telegraphic Agency.