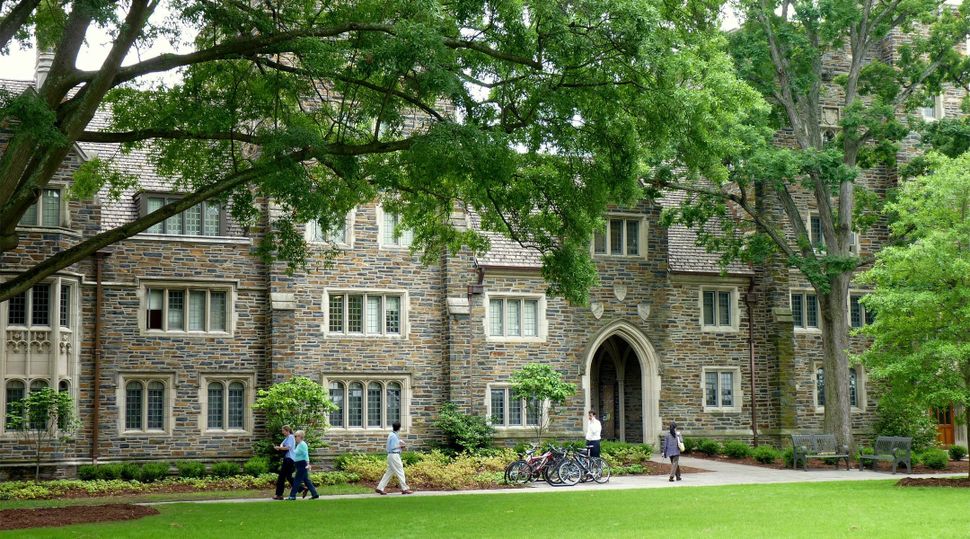 Pedestrians walking in the campus of Duke University on May 14, 2011 (Wikimedia Commons)

(JTA) — A prominent Jewish civil rights group is demanding that the administration of Duke University override the student government after its president denied recognition to a campus pro-Israel group.

The Louis D. Brandeis Center, a Washington, D.C.-based nonprofit advocating for Jewish students, told Duke’s administration in a letter that it was “legally obligated to take corrective action” in the case, saying the pro-Israel group was “subjected to special scrutiny that other groups did not have to endure.”

In a reply on Friday to the Brandeis Center letter, a university official said the university is continuing to investigate whether the veto constitutes discrimination.

The Brandeis Center letter also noted that Wang’s stated rationale for vetoing recognition of Duke SSI was a “rather anodyne” post on social media.

The Instagram post in question was in response to a student who charged that the pro-Israel group “promotes settler colonialism.” SSI responded in its own Instagram post, saying “please allow us to educate you” and inviting the critic to attend one of the group’s events. Wang did not say why that response was “potentially hostile or harmful.”

Duke’s President Vincent E. Price and Provost Sally Kornbluth had already responded to Wang’s decision via a statement last month. According to the statement, the veto “raised concerns about whether students have been treated in accordance with university policy that prohibits discrimination and harassment based upon national origin and religion.”

The statement continued, “The university has identified options for SSI to secure financial and programmatic support.”

Alyza Lewin, the Brandeis Center’s president, told the Jewish Telegraphic Agency that the statement was welcome but insufficient.

“They clearly have the authority to turn around and say, ‘We are going to correct this misstep, we are going to make sure that students supporting Israel is treated no differently than any other recognized student organization,’” she said.

The Brandeis Center letter noted a resolution agreement with the U.S. Department of Education over a separate incident involving alleged antisemitism at the University of North Carolina at Chapel Hill, in 2019.

In its reply to the Brandeis Center, the university said that “the university is taking these allegations seriously, consistent with the resolution agreement.”

Title VI of the Civil Rights Act prohibits national origin and other forms of discrimination at federally funded programs.