Jack Feldman, Holocaust survivor who told his story in Emmy-winning documentary, dies at 95 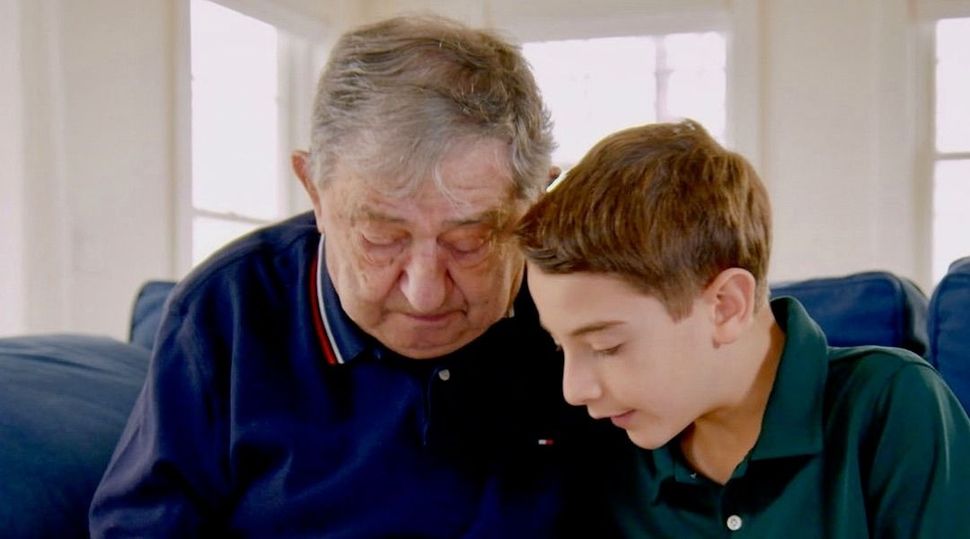 Holocaust survivor Jack Feldman and his great-grandson Elliott Saiontz in a scene from the HBO documentary “The Number on Great-Grandpa’s Arm.” (HBO)

(JTA) — In 2016, Jack Feldman’s 10-year-old great-grandson asked him about the number tattooed on his skin. Their conversation became the basis of the short HBO documentary “The Number on Great-Grandpa’s Arm,” an introduction to the Holocaust intended for children.

Veteran documentary filmmaker Amy Schatz was attracted to the project because, she said at the time, there was hardly any material on the Holocaust suitable for children and their families. Her goal was to transmit the survivor’s experience “gently and with clarity.”

The film went on to win a Primetime Emmy Award for Outstanding Individual Achievement in Animation and was the center of an installation at the Museum of Jewish Heritage in Manhattan in 2018 and 2019. Sheila Nevins, the film’s executive producer and longtime president of HBO Documentary Films, called Feldman “a special storyteller.”

Feldman, who survived a series of Nazi labor and death camps before emigrating to Rochester, New York, after the war, died at his home on Dec. 20, 2021. He was 95.

Best known in Rochester as the owner of a popular fish market, Feldman took pride in his later years as a witness to the Holocaust and in the film’s contribution to Holocaust education. He attended the film’s premiere at the Museum of Jewish Heritage in 2018.

Srulek “Jack” Feldman was born in 1926 in Skarzysko-Kamiena, Poland and grew up in Sosnowiec. After the war broke out in 1939, his family was forced to move to the Sosnoweic Ghetto. A year later, the 14-year-old Srulek was seized by Nazi officials and sent first to Bergen-Belsen, and later to Buchenwald, Annaberg, Fallsbruck, Gleiwice, Ludwigsdorf, and, in July 1944, Auschwitz-Birkenau, where the number A-17606 was tattooed on his arm.

As the Soviet army approached Auschwitz in January 1945, Feldman and other prisoners were forced on a death march from Poland to Germany, where he was finally liberated on May 5. After liberation, Jack made his way back home, where he learned that none of his immediate family members had survived, according to the Museum of Jewish Heritage. After making his way to Feldafing Displaced Persons camp, he met and married his wife Sally. Their first son, Sam, was born at the DP camp; after arriving in the United States in 1949, they had two more children, Irving and Rochelle.

In Rochester, Feldman opened a fish market on Joseph Avenue in the city’s Northeast, and kept it going for 50 years even after other businesses moved to more prosperous neighborhoods. According to an obituary in the Rochester Democrat & Chronicle, Feldman never forgot what it meant to be hungry and would give free fish to customers too poor to pay. During the racial unrest in 1964 in Rochester, his store was spared from looting by grateful community members, according to the newspaper.

Feldman’s survivors include his three children, seven grandchildren and six great-grandchildren. A granddaughter, Stacey Saiontz, is a trustee of the Museum of Jewish Heritage.

During a post-screening discussion of the film at the museum in 2018, Feldman was asked why he wanted to take part in the project.

“I want people to see what’s going on,” he said. “A lot of people where I live don’t know when I ask if they know about the Holocaust. They say, ‘Eh — sometimes.’ They weren’t interested.”

Jack Feldman, Holocaust survivor who told his story in Emmy-winning documentary, dies at 95