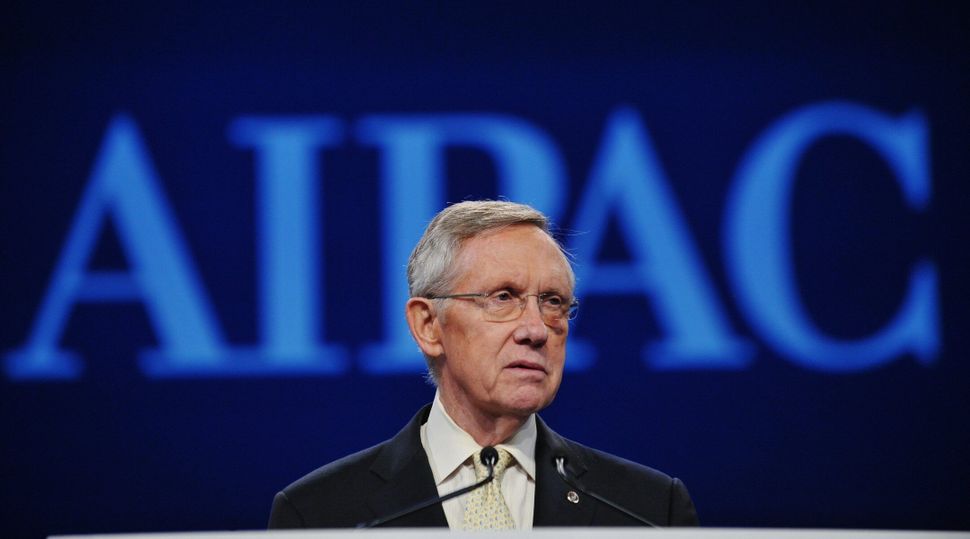 WASHINGTON (JTA) — When Harry Reid was 19, he wanted to marry Landra Gould. Her Jewish parents had other ideas.

Reid, a middleweight boxer, got into a fistfight with Gould’s father in the Goulds’ front yard. And then he and Landra eloped.

Reid’s pugilistic sensibility served him well, lifting him up from abject poverty through Nevada’s at times violent political culture and then to the U.S. Congress where he became the Democratic Party majority leader who shepherded through major legislation, including President Barack Obama’s signature Affordable Care Act.

Reid died Tuesday at 82 in Henderson, Nevada, a suburb of Las Vegas. The cause was pancreatic cancer.

Reid with weeks of marrying Landra reconciled with his in-laws and introduced Jewish customs into his Mormon household. He made fast friends in the Jewish and pro-Israel communities who appreciated having a fighter on their side.

The ties persisted into his retirement. In interviews, he would say one of his greatest concerns was the spike in antisemitism. Reid, who remained even out of office a kingmaker in Nevada politics, handpicked a former synagogue president, Jacky Rosen, to run for Senate in 2018. She won.

Reid made close Jewish friends in Nevada, in part because he grew to love his wife’s Jewish roots — later in life, he wore his father-in-law’s ring  — but also because it was inevitable in a state that Jews helped found and build.

Reid started buying Israel bonds early in his career. “I’d say, ‘Harry, you can’t afford to give that much,’” a close friend, Neil Galatz, told the Jewish Telegraphic Agency in 2006, after Democrats swept Congress and Reid launched his eight-year stint as majority leader. “He’d say, ‘I can’t afford not to.’”

Reid was already a seasoned politician when he was elected to the U.S. House of Representatives in 1982 and then to the Senate in 1986. He was 29 when he won his first election in 1968 to the state legislature and 31 when he was elected Nevada’s lieutenant governor. His running mate was Mike O’Callaghan, his onetime boxing coach.

He also started to build political alliances in the Las Vegas Jewish community. Shelley Berkley, who would go on to be one of Israel’s fiercest defenders in her years in Congress, knocked on doors for him in his 1968 race for the legislature.

“This is a man that was raised in Searchlight, Nevada, in a home that had a dirt floor and no indoor plumbing,” she told JTA in 2006. “He is the very embodiment of the ideals of America: that it doesn’t matter where you’re from, you can rise to become one of the most powerful people in this country.” (Berkley, with Reid’s blessing, ran for the Senate in 2012 and narrowly lost to Dean Heller, who was defeated in 2018 by Rosen.)

Reid’s first run for the U.S. Senate was in 1974. He lost, and Gov. O’Callaghan soon named him to run the state’s gambling commission. Reid, a teetotaler and a devout Mormon, hated gambling, although it put his state on the map. In 1978, Reid leaped across a table and tried to strangle a Jack Gordon, a mobster who offered to bribe him.

The mob apparently didn’t forget. In 1981, Landra found the family station wagon wired with a bomb. Thereafter, the couple started the car by remote control. Reid blamed Gordon, a Jewish  gangster who was married for a time to Michael Jackson’s sister, LaToya. Police could never prove a connection.

Reid was a leader on pro-Israel legislation and he took time in 2010, when as majority leader he was muscling through the Affordable Care Act, to shepherd through major sanctions targeting Iran.

Reid turned to pro-Israel donors for help and they turned out for him, helping to elect him to his final term. “I’ve worked very hard for Harry Reid’s campaign, and the pro-Israel community has been very very supportive of him,” the late Lonny Kaplan, a former president of the American Israel Public Affairs Committee, told JTA at the time.

Reid paid back the favor, making headlines in 2011 when he spoke at AIPAC’s annual policy conference and criticized Obama’s call for a peace deal based on the 1967 lines.

It was not the only time Reid  sided with the pro-Israel community against Obama administration policies. In 2016, he joined five other top Democrats in rapping the administration for not extending its anti-boycott policies to products made in Jewish settlements in the West Bank. He sided with Obama, however, on the most significant difference the president had with the pro-Israel community, the Iran nuclear deal.

The Reids lit Shabbat candles in their home until Landra’s parents died. They kept a mezuzah on the door of their home in Searchlight, where Reid grew up in acute poverty.

“My two oldest children have great affection for things Jewish, and my three younger children are aware of their mother’s lineage, and all of them are very proud of the fact that they are eligible for Israeli citizenship,” Reid told The New Yorker in 2005.

Reid’s departure from Congress in 2016 did not diminish his influence in Nevada. In 2016, on his way out, he plucked Jacky Rosen, a Henderson software developer and synagogue president, from obscurity to run for a competitive U.S. House of Representatives district and made it clear to primary rivals that they should henceforth consider themselves afterthoughts.

She won and two years later, Rosen, having proven her mettle, got the backing of Reid’s machine for a Senate run. She won again.

Reid in 2016 typically pulled no punched in describing the dangers he perceived in Donald Trump’s election to the presidency.

In 2015,, after announcing that he would not run again, Reid endorsed Sen. Chuck Schumer, D-N.Y., to be his successor as caucus leader, a move that would propel Schumer in 2021 to become the first Jewish majority leader, the highest elected Jewish political figure in U.S. history.

“Harry Reid was one of the most amazing individuals I’ve ever met,” Schumer said Tuesday on Twitter, announcing that flags at the Capitol would fly at half mast. “He never forgot where he came from and used those boxing instincts to fearlessly fight those who were hurting the poor and the middle class.”

In 2019, Reid was rattled when he saw a photo of someone bearing a swastika sign at a Nevada campaign event for Bernie Sanders, the Jewish Vermont senator running for the Democratic presidential nomination.

“What the Bernie Sanders swastika event did, proved to me that I was absolutely right in what I was urging, to start talking more openly about hate and how we have to understand how a large part of that hate is anti-Semitism,” Reid told the Nevada Independent. “I don’t think anti-Semitism is anything caused by Democrats or Republicans. I think it’s an issue that Democrats and Republicans and independents need to join hands and do everything we can to wipe it out.”