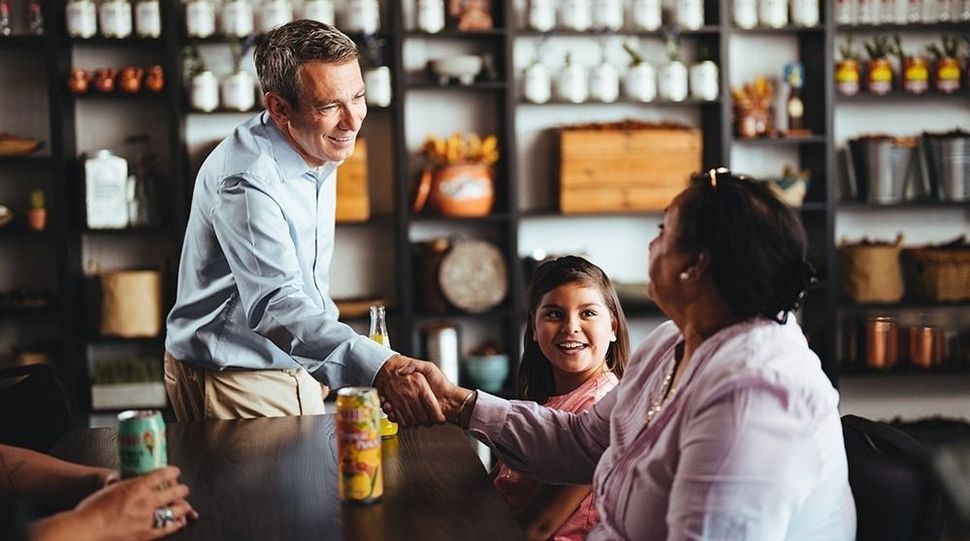 Aaron Lieberman, shown in an undated photo from his campaign website, quit his Arizona state legislature seat in September to run for governor next year. (aaron4az.com)

(JTA) — In the summer of 1993, Arizona native Aaron Lieberman made friends with three other Jewish college students while working at a camp in upstate New York for kids with social, educational and emotional challenges.

The four, including David Carmel, Rebecca Weintraub and Jordan Meranus, saw the substantial effect that one-on-one attention had on children over the course of the summer. They discussed transferring the methods to early childhood education, so the effects would be longer-lasting. Lieberman’s inspiration was a teacher who helped him overcome a speech impediment as a child.

Lieberman and Weintraub, who were both at Yale, got a professor, Edward Zigler, the Jewish psychologist who helped design the federal preschool program Head Start, to mentor the project. Zigler helped broker an agreement with New Haven’s board of education to launch a pilot program.

That evolved in 1994 into Jumpstart, a nonprofit organization that pairs university students with preschoolers through a number of partnerships, including Head Start. A 2018 peer-reviewed study published in Cogent Education found that “children in Jumpstart improved significantly in their language skills, literacy, initiative, and social development.” Jumpstart now operates in 15 states and Washington, D.C.

Lieberman, 50, calls himself an “accidental entrepreneur” — after serving as Jumpstart’s CEO for its first seven years, he spun off a number of for-profit enterprises centered on early childhood education. One of those, Acelero, lists its revenue on an employee recruitment site as between $50 million and $100 million.

Lieberman moved back to Arizona with his family in 2015, and in 2018 as a Democrat he won a traditionally Republican seat in the state legislature on a platform of working across the aisle. He quit his seat in September, less than a year into his second two-year term, to run for governor next year.

He is aware that he would be the first Jew to occupy that office.

“A lot of Jews will feel that there’s something extra special about electing a Jewish governor,” he said. “I’m here to be the governor for all of Arizona no matter what their faith tradition is, but I think it is an extra special and a nice thing that I will be the first.”

Two hurdles await: an August primary that looks competitive, and securing the vote in a state that bumps back and forth between Republicans and Democrats from election to election. Two other Democratic candidates that have announced campaigns have statewide profiles — Katie Hobbs, the incumbent secretary of state, and Marco Lopez, a former mayor of Nogales who has federal government experience and deep ties to the state’s substantial Latino community. The Republican frontrunner, former news anchor Kari Lake, has already taken flack for associations with the QAnon disinformation campaign and with a Nazi sympathizer.

Lieberman said he was partly inspired to run because of the Republican push to decertify Arizona’s presidential election results. (Doug Ducey, the GOP incumbent who resisted Trump’s pressure to decertify, is reaching the end of his term-limited second term.)

“We don’t want that pen in Kari Lake’s hand in 2024. Because she’ll do whatever the [former] president wants her to do,” Lieberman said.

But although he is a solid Democrat on a range of issues, including the right to abortions, Lieberman is also an ambitious centrist. He shies away from digging deep into hot-button issues that could hurt him in a purple state.

Most strikingly, his website does not once mention the immigration issues in a border state that has become a locus for the fraught political battles over the issue. In an interview with the Jewish Telegraphic Agency, he condemned state Republicans like former Maricopa County sheriff Joe Arpaio for trying to make it a state issue — but he kicked the can to D.C.

“We need elected senators and congressmen and a president who can bring people together and fix our broken immigration system and come up with real lasting solutions,” Lieberman said. “Arizona desperately needs a comprehensive immigration program that includes a guest worker visa program. I can’t do that as the governor, as the governor, I want a secure border. I want to know who comes across it safely and securely. But the big work needs to be done in Washington, D.C.”

Lieberman has adopted two sons from Ethiopia, and has said that he took citizenship for granted until they were naturalized.

“I realized then just how hard so many immigrants work to get their citizenship,” Lieberman wrote on Facebook on Sept. 17, 2020, marking Citizenship Day. “We were joined in the ceremony by immigrants of all ages; many of whom had to work hard and study hard to gain their citizenship.”

His reluctance to wade into controversial waters emerged again in the interview when talking about a law that requires Holocaust education in Arizona schools, which he helped shepherd. The bill was nearly derailed because Republicans sought to include the International Holocaust Remembrance Alliance’s definition of antisemitism, which includes ways in which criticism of Israel can be defined as antisemitic. Some Democrats objected because they see the definition as impinging on legitimate criticism. The main sponsor, Rep. Alma Hernandez, a Jewish Democrat, reluctantly removed the definition, which drew sharp criticism from some pro-Israel groups.

Asked for comment on the IHRA definition, which has rattled Jewish and pro-Israel politics nationally, Lieberman said only: “No.”

“We had an incredibly high percentage of kids in Arizona, truthfully, it’s in every state, who couldn’t tell you if Jews were the perpetrators or the victims in the Holocaust,” he said about the law. “It’s really kind of terrifying.”

Lieberman instead made education a focus of his three years in the statehouse, advocating for budget increases for child care subsidies for working mothers and for school funding. He wants universal pre-K and community college scholarships for students with B averages.

It’s a major component of his campaign and he says he takes it with him wherever he goes, including among the state’s Native Americans, who helped swing Arizona to Biden last year.

“I was the first candidate to go up to the Navajo reservation, where the turnout among the tribes elected Joe Biden,” he said. “Those voters have concerns like every other voter, I want a good school for my kid. I want to be able to have an opportunity to earn enough money to support my family. Right now our teachers are paid 49th in the country. I want to get to 25th.”

Lieberman spent years in New York City, but his Jewish Arizona roots helped bring him back. His mother, Evie, in 1976 was one of the founders of Temple Emanuel in Tempe. The family later moved to Phoenix.

“Being Jewish and on the East Coast, in particular living in New York, it felt like almost everybody was Jewish,” he said. “In Arizona, it felt like you were part of this much smaller kind of tight-knit community that just interacted in a little bit of a different way, but in a special way and in a nice way.”

Lieberman said the responsibility of public service drew him closer to Judaism.

“Once I got elected, for whatever reason, I just kind of felt this weight on me and I started becoming a regular Friday night service-goer, in part because the services at Temple Solel [in suburban Phoenix] are so musical,” he said. “It’s a great way to end the week and start the weekend.”

Also attending Temple Solel is Kate Gallegos, Phoenix’s Jewish mayor, with whom Lieberman has worked on rerouting a water pipeline that was poised to rip through a mountain reserve.

“The idea of tikkun olam has really been the animating force of my life. You know that as Jews, we are here in part to repair the breach to make the world better,” he said. “That’s what I’ve tried to do almost every day of my kind of professional career. And I see politics as an extension of that.”

—
The post The founder of Jumpstart wants to be Arizona’s first Jewish governor appeared first on Jewish Telegraphic Agency.