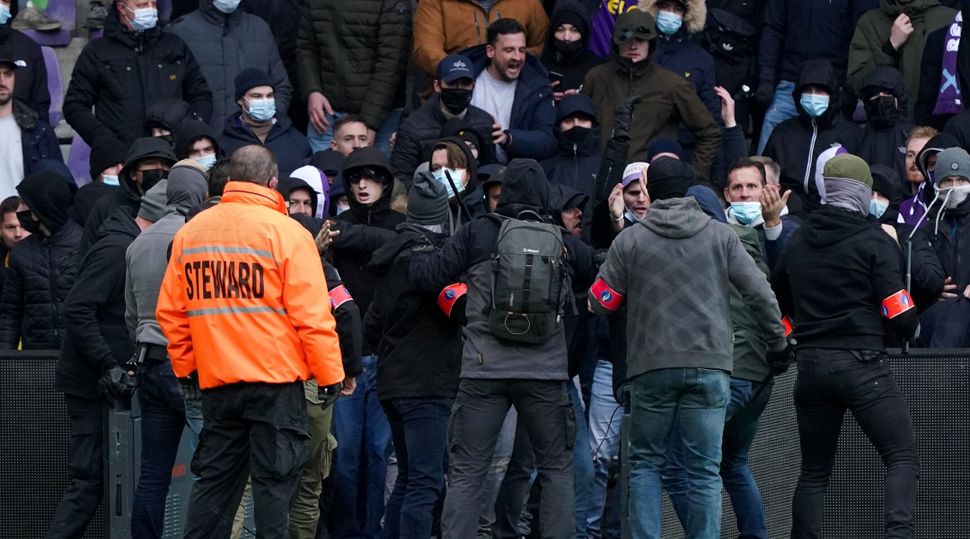 Soccer fans scuffle during a match between the Beerschot team and Royal Antwerp FC at Olympisch Stadion in Antwerp, Belgium, Dec. 5, 2021. (Orange Pictures)

(JTA) — Dozens of soccer fans in Antwerp, Belgium, were filmed giving Nazi salutes while chanting about Hamas and gassing and burning Jews.

Police are investigating the videos, which appeared on social media earlier this week. The incident appeared to have taken place at or outside Café Stadion, a restaurant near a soccer stadium.

The men chanted: “My father was in the commandos, my mother was in the SS, together they burned Jews ’cause Jews burn the best,” as well as “Hamas, Jews to the gas” while making the Nazi salutes. They appear to be fans of the Beerschot soccer team of Antwerp, the Gazet van Antwerpen reported.

Such soccer chants occur regularly in Europe, and in the Netherlands and Belgium especially, ahead of matches between teams that fans of rival soccer clubs label as “Jewish.” Sometimes, as in the case of the Ajax team of Amsterdam, supporters of those teams call themselves and their teams Jewish.

But in recent years, these soccer chants increasingly have been occurring also outside the context of sports, including at a graduation party of high school students in the Netherlands in 2016.

Separately, the ethics board of the Royal Belgian Soccer Association last week fined the Club Brugge Belgian soccer team to the tune of $2,226 for chants heard at three recent matches. Fans of Brugge shouted “Whoever doesn’t jump is a Jew,” as they sprang up and down during the matches.