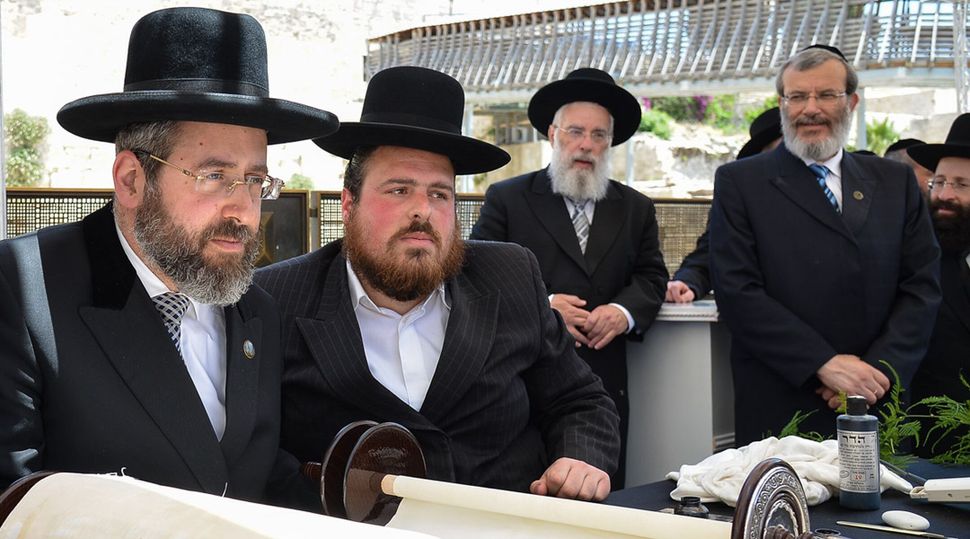 (JTA) — Israel’s Ashkenazi chief rabbi called for victims of sexual abuse to bring complaints to the “relevant authorities,” saying “there is an obligation to complain to the authorities in charge of these issues, and not hide it,” according to the site Israel National News.

The comments from Rabbi David Lau Wednesday came after Lau was criticized for visiting the family of Chaim Walder, the Israeli haredi Orthodox author of children’s books who was recently accused by dozens of young women of sexual abuse and who died by suicide earlier this week, as they sat shiva for Walder.

“These acts must be uprooted and eradicated completely. In any case when there is a hint of an indecent act or harassment, there is an obligation to complain to the authorities in charge of these issues, and not hide it,” Lau said in a statement released by his office.

The reaction to the allegations against Walder has been watched closely for signs of a shift in the Orthodox community’s approach to revelations of sexual abuse at the hands of respected rabbis and community members. While the Orthodox community has long tended to sweep such allegations under the rug, that trend appeared to be shifting in the days following the allegations against Walder, which were first published in an investigation by the Israeli newspaper Haaretz.

After a New York Jewish bookstore, Eichler’s, announced it would no longer sell Walder’s books, which had been a staple in many Orthodox homes, Walder’s publisher, Feldheim Publishers of Nanuet, New York, tweeted that it would remove Walder’s books from shelves while the allegations against him were being investigated. Yated Neeman and Radio Kol Hai, two Israeli news organizations, suspended Walder from his positions at the companies in the wake of the allegations, according to Israeli news site Arutz Sheva. Several prominent rabbinic leaders urged parents to remove his books from their homes.

On Sunday, a rabbinical court in Safed heard testimony from 22 young women about alleged abuse at Walder’s hands. But after Walder was found dead Monday morning, apparently from a self-inflicted gunshot, some of the backlash against Walder appeared to be redirected against his accusers, with some blaming “lashon hara,” which in Hebrew can refer to speaking ill of others or gossip, for Walder’s death.

In sharing the news of Walder’s death, one haredi Orthodox website declined to mention the allegations against him and ended the article with the phrase: “May his memory be a blessing.”

Critics said Lau’s public visit to Walder’s family added to the whitewashing of Walder’s alleged crimes. Rabbi Natan Slifkin, and author and director of the Biblical Museum of Natural History in Beit Shemesh who writes the blog “Rationalist Judaism,” addressed the issue in a blog post.

“By honoring the family with a visit while not making any statement about Walder, this lends support to the “persecuted tzaddik” narrative,” Slifkin wrote, using the Hebrew word for “righteous one.”

“In addition, by not making any statement of support for the victims, it is a further slap in the face to them,” he wrote.

Tomer Persico, an Israeli writer, shared an article to Twitter Thursday about a young woman and sexual assault survivor who died of a suspected suicide after news broke of Walder’s suicide.

“Wonder if respected rabbis will attend her funeral,” he wrote.

—
The post After being criticized for attending shiva of accused abuser Chaim Walder, Israeli chief rabbi calls for victims of abuse to come forward appeared first on Jewish Telegraphic Agency.