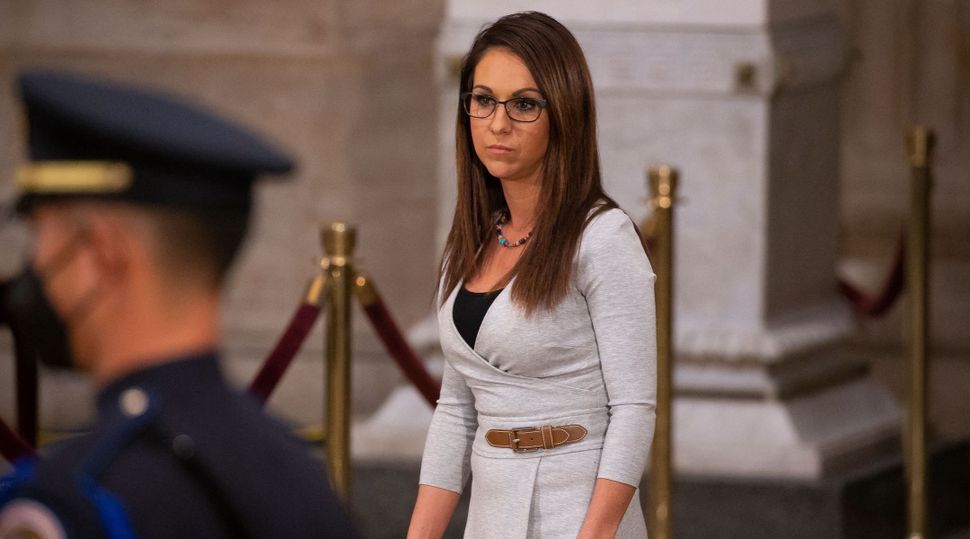 Rep. Lauren Boebert pays her respects at the casket of Bob Dole in the Capitol rotunda, Dec. 9, 2021. (Michael Reynolds/Pool/AFP via Getty Images)

(JTA) — Rep. Lauren Boebert asked a group of kippah-wearing Jewish visitors in a U.S. Capitol building elevator on Thursday if they were there to do “reconnaissance,” Buzzfeed News reported.

The outspoken Colorado Republican claimed the comment was a joke tied to criticism she has received over Capitol tours she reportedly gave in the days before the Jan. 6, 2021 insurrection there. Some in the elevator “got it,” she told Buzzfeed.

But an unnamed rabbi who was part of the group, which was visiting with Democratic House Rep. Tom Suozzi to mark the 41st anniversary of the end of the Iran hostage crisis, said he was left “very confused.”

“When I heard that, I actually turned to the person standing next to me and asked, ‘Did you just hear that?’” the rabbi said.

The rabbi added that “people are very sensitive” in the wake of the hours-long hostage situation that unfolded last weekend at a synagogue in Texas.

Ezra Friedlander, an Orthodox lobbyist who organized the group’s visit to the Capitol, told the Forward that because it was a crowded hallway, he did not directly hear Boebert’s remarks. He was made aware of it by the rabbi only after the group got off the elevator, and said the comment had clearly raised eyebrows.

“It was totally inappropriate to label a group of Americans, some of whom who were visibly Jewish and of the Hasidic tradition, trying to insinuate something that does not exist,” Friedlander said. 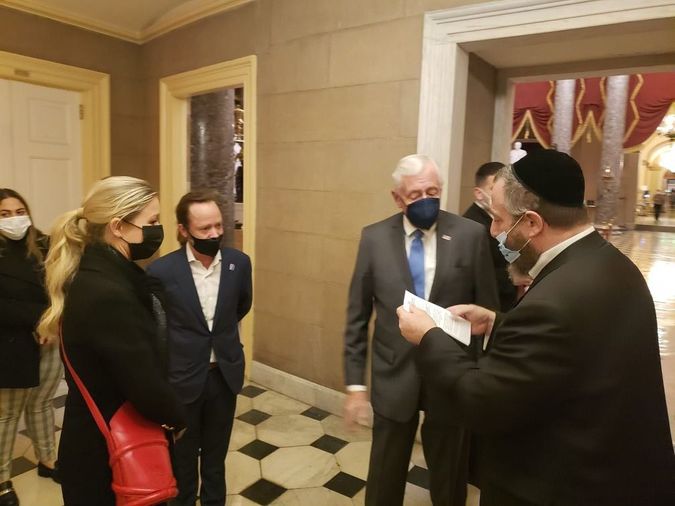 Another unnamed witness said Boebert looked over the group from “head to toe,” suggesting that she understood she was speaking to Jews when she made the comment. She told Buzzfeed, “I’m too short to see anyone’s yarmulkes.”

Friedlander brushed off Boebert’s excuse that she wasn’t able to identify them as Jewish. “If she didn’t see my yarmulke, she clearly saw my long Hasidic suit, she clearly saw my beard,” he said. “And as my wife likes to remind me, when you’re in Washington, you stand out. I don’t think that what she’s saying is a portrayal of the truth, unfortunately.”

The group was in D.C. on to garner bipartisan support for the effort to get the Iran hostage survivors Congressional Gold Medals.

“The bottom line is that everyone, especially members of Congress, have to be very, very thoughtful in the language they use,” Suozzi said in a statement. “You can’t be cavalier in the comments you make especially if they could be perceived as being antisemitic, or discriminatory.”

Boebert has taken heat several times in her short tenure in the House so far, including for suggesting that Democratic Rep. Ilhan Omar was a terrorist. In July, the Auschwitz museum condemned her rhetoric after she called public health employees working to combat COVID-19 “needle Nazis.”

—
The post Lauren Boebert asked Jews visiting US Capitol if they were doing ‘reconnaissance’ appeared first on Jewish Telegraphic Agency.